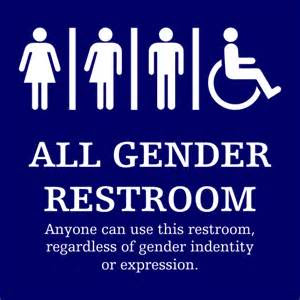 Are we being discriminatory for not allowing men into women's bathrooms or women into men's?

I mean if a man identifies himself more as a woman than a man, why should he be subjected to going into that nasty men's bathroom where he will no doubt feel terribly out of place, even a tad frightened perhaps at all the big, hairy men exposing themselves over urinals. (Sorry for the visual)  And a woman who feels like a man, well, why should we keep her from chumming it up with the guys while they do whatever men do in bathrooms?

Yet even as I read back over my first question, I wonder if I've somehow been kidnapped and transported to an alien world. This certainly can't be earth or the United States where I grew up. Something is terribly amiss.

However, these bathrooms are popping up all over the place. My sister in law says they saw one in South Florida.  Obama even installed one in the Whitehouse. (No shocker there) In addition many college universities are putting these moral atrocities up throughout their campuses.  This, from the Harvard Crimson

The need for gender-neutral restrooms is profound, and their expansion is long overdue. Gender-neutral restrooms are critical for the safety and well-being of BGLTQ students, and it is vital that they are installed more widely throughout campus.  (Okay I get the B,G,T, but what is L and Q? I need to keep up with this. Pretty soon they will be using the entire alphabet, and I'll be completely lost!)

Of course there are still regular bathrooms at Harvard. For now. However, it has been reported, you may be relieved to hear, that a small college in New York City, The Cooper Union, has made every bathroom on campus gender neutral!  See how non-discriminatory they are! What a relief to know there are some people fighting for this crucial civil right issue!

I picture a young girl, perhaps 10 or 11, who enters a public restroom to take care of a rather desperate need, and upon coming out of the stall she finds a 6'2" linebacker for the 49ers--who by the way, has a sudden sense he might be a woman--pulling out his man-part to take care of business. But who cares if that little girl is traumatized and needs therapy for years?  She should understand that we cannot infringe on the rights of the few in order to uphold the rights of the many.

Male students within the University’s Whitney Hall student residence were caught holding their cellphones over female students’ shower stalls and filming them as they showered.

Who cares if a man in Seattle entered the women's locker at a public swimming where young girls were getting undressed, and when women complained he announced that he had a right under the law to be there.  Why he probably woke up that morning and suddenly felt like a woman. We certainly don't want to infringe on his rights, even though the rights of the dozens of women changing in the locker were infringed upon.

Yet wait. That got me to thinking. What's to stop any pervert from putting on a dress and making the rounds of women's restrooms and locker rooms marked gender neutral and peeping at anyone he wants? Even taking pictures to put on the internet!  Well, in fact, nothing. What a field day the perverts in this country are going to have! Now they have the right to peep at women of all ages, from young elementary school girls to grandmothers, any time they want! Think of the fantasies they will have with your sisters, mothers, daughters and granddaughters.Isn't that grand?

Can someone please tell me what the heck is going on?