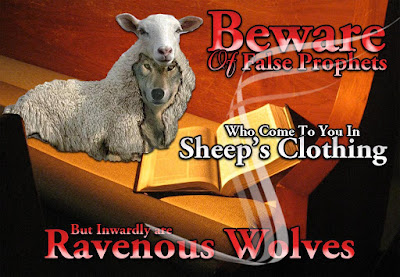 For false christs and false prophets will rise and show great signs and wonders to deceive, if possible, even the elect Matt 24:24

But there were also false prophets among the people, even as there will be false teachers among you, who will secretly bring in destructive heresies, even denying the Lord who bought them, and bring on themselves swift destruction. 2 Peter 2:1

Both Jesus and the Apostles warned us over and over and over about False prophets and False teachers who would appear like "Christians", like sheep, like angels of light, but who would, in fact, be agents of Satan worming their way into the body of Christ and introducing false teachings that would deceive many. I've mentioned this before on my blog because I truly believe that we live in an age where there is a tremendous amount of deception going on in the church.  And I'm not just talking about the obvious people like Benny Hinn, Ted Haggart, Jim Baker, or Bob Coy.  I'm talking about your everyday normal pastor or elder, the guy that most people would never suspect at all. The one through which Satan so craftily and stealthily introduces the smallest of deviations from Scripture. Just a little error here, a little error there, all mixed up with truth, and before you know it, the church is off believing the wrong thing, and even in extreme cases, the wrong Jesus.

In prior posts, I've listed some things that we do and say in church that are not in the Bible, things which have come down through traditions that most Christians accept as the Gospel. Most of these are probably harmless. Things like the way we do communion, the organization of the church, sinners prayer, seeker-friendly programs, etc.   But I'm talking about something much deeper here. Something that affects the core beliefs of Christians.

In 1987 a man named Jeffrey Hadden did a survey of 10,000 Protestant Clergymen, out of which 7441 replied. Here's his questions and the responses

“Do you believe in the virgin birth of Jesus?  “No” was the response from 60% of Methodists down to 5% of Missouri Synod Lutherans (MS Lutherans).

“Do you believe in evil demon power in the world today?  62% of Methodist pastors said, “No” varying down to 2% of MS Lutherans.

“Do you believe that the Scriptures are the inspired and inerrant Word of God in faith, history, and secular matters?
"NO" 87% of Methodists
"NO"  95% of Episcopalians
"NO"  82% of Presbyterians
"NO"  67% of American Baptists
"NO"  77% of American Lutherans
"NO" 24% of Missouri Synod Lutherans

Let me remind you that this was TWENTY years ago!  How much worse is this apostasy now?
Well, you may say, I don't attend one of those denominational churches, and my pastor believes all of the above. Does he?  He may very well, but how do you know for sure? We live in a country where over HALF the Christians do not believe Satan exists. Barna Study

My husband and I have left THREE churches here in Northern California because of apostasy. Two because the pastor fell and the last because we didn't believe their seeker-friendly programs and preaching-only-half-the-gospel was a good place for us to be.  I guess that has made me a little skeptical about church leaders, which I'm thankful for. In the past, if the Church Beliefs listed on the website aligned with mine, I believed everything the pastor told me. I assumed that he was a man of God who spent tons more hours studying Scripture and hearing from God than I had time for. So, surely he knew more than I did, and had an inside knowledge of interpreting Scriptures

I was wrong. I believe the problem is that MOST Christians are like I was, blindly following what their pastor or elders say. Honestly, they don't know any better because MOST Christians don't read the Bible for themselves.  How can you know if your pastor has gone off track if you don't even know the right track to be on?  Mind you, some deviations are so subtle that unless you know the Bible really well, you will miss them.  That's why it is SO IMPORTANT to be in the WORD everyday. And not just a chapter here and a chapter there. Read the entire Bible once or twice a year. Read and study. And when your pastor or even a friend says something that you aren't sure about, do your research. If you can't it in the Scripture, ask your pastor to show you. This goes for sermons you may hear online or on CDs you purchase.  TEST everything.

Beloved, do not believe every spirit, but test the spirits, whether they are of God; because many false prophets have gone out into the world. 1 John 4:1

There is a GREAT delusion coming upon the world, and it's going to start in the church. We must be ever more diligent in these last days to keep in the Word and keep in prayer and pray that God keeps us from deception. Don't think you are immune to it. None of us are.   Time to get serious, folks.