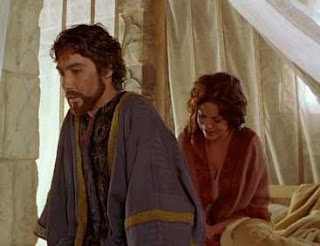 I love King David. He's definitely one of my favorite people in the Old Testament. What I love most about him was his utter devotion to and love for God. Remember in those days, people didn't have access to God like we do. Yes, God heard their prayers, but they couldn't hear back from God unless He appeared to them, sent an angel, spoke to them through a prophet, or gave them momentary inspiration of the Holy Spirit. Even the High Priest had to go through multiple sacrifices, cleansing rituals, etc.. before he could even enter the Holy of Holies, and he could only do that once a year.

I hear some Christians say that they wish an angel would appear to them or they wish that Jesus would appear and tell them what to do. Others run to prophets for answers. But the truth of the matter is, the saints in the Old Testament would have LOVED to have had what we have today:  The Spirit of God living inside of us and hence, moment by moment access to the throne of God.  Yet, I wonder how many of us really appreciate that privilege?

Anyway, I digress. That David loved and honored the Lord so much without having access to God like we do marvels me. In fact, David was so anointed by God that he never lost a war.  Did you know that? Every battle David fought, he won!  How would you like that record? Not that we fight physical battles (most of us) but we do fight spiritual ones. Wouldn't it be awesome to be so anointed and favored by God that we had victory over everything the enemy sends our way?  It's possible!

Also, another cool fact about David is that he actually WILL sit on the throne again in Jerusalem. The Bible is very clear about that. Of course that will be in the millennial Kingdom after Jesus returns to Earth. Jesus will rule the world, but David will rule Israel.  Here's just one of many verses. Think this is a figurative promise?  I don't think so.

I actually pray quite often that God would give me a heart like David's, for David was a man after "God's own heart".  What a wonderful thing to say about anyone.  But as we all know, for all of David's good qualities, he was also a sinner like the rest of us. In fact, he was an adulterer and a murderer. So how did this great man fall?

We all know the story. David was on his rooftop and he happened to see a woman bathing in her courtyard. Bathsheba. Apparently she was very beautiful and David kept looking and looking until his lust reached its peak and he had her brought to him. Later when Bathsheba got pregnant, David had her husband killed in order to cover it up. Even after that, he married Bathsheba.

Pretty bad stuff, right? As I was reading this story, I thought to myself .. Wow, I would never do something like that!  Then I almost heard the Lord laughing at me and instantly things popped into my mind that I had done. Yikes!  How proud we Christians can become!!  The truth is, any of us are but a moment away from diving into the mudpit of sin.  How did it happen to such a great man as David? I'll submit to you my opinions, which will also substitute as warnings to us all.

Avoid Complacency in your walk with God:  I believe David had drifted from God. Maybe he wasn't praying as often or going to the temple or reading the Torah.  Maybe he'd gotten caught up in the pleasures of this world.  You see, he should have been at war with his men. The Scripture is clear in 2 Samuel 11 that this was the time kings went out to battle. Yet David sent his general and armies out without him while he stayed home.

Keep your mind and body occupied with honest work:  There's a saying that an idle mind is the devil's workshop or something like that. Boredom and laziness can lead to all sorts of trouble and it gives satan an opportunity to plant ideas in your head, to fill your thoughts with things that shouldn't be there. The Scripture says that David was lying in bed in the late afternoon right before he saw Bathsheba.

See or hear something you shouldn't? Turn away:  I'm sure David didn't set out to watch Bathsheba bathing, but as soon as he saw her, he should have walked away. Whatever your weakness in life is, the devil is going put it right in front of you often and then whisper in your ear that you deserve it.  The reason David couldn't turn away was probably because he wasn't close to God. He'd drifted and wasn't thinking on Godly things. If he had been, he would have had the strength to turn away.

Let's face it, sin is pleasurable. But it always has a price. David payed a huge price with years and years of trouble in his family, including death, betrayal, rape, and his own son trying to murder him. The pleasure of sin is never worth the price.

David did repent of his sin and turn back to God, but I'm sure he would have given anything to turn back the clock and resist Bathsheba in that one moment of weakness. Let this be a warning to us all.