Do we care that our brothers and sisters are being butchered? 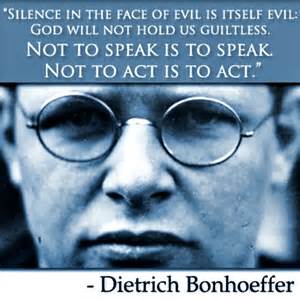 Not a fun topic today but one that is very important, especially if you're a Christian. Yet so many Christians here in America either don't know about it or really don't care. I have a friend who uses Paul's admonition in Philippians 4:8 to think on things that are good, pure and lovely, as an excuse to ignore what's going on in the world.

Christians are being exterminated. Did you know that? Not here in the West (Yet) but in many many countries around the world. These are our brothers and sisters. These are the people we will be spending eternity with. Yet nobody seems to care. Here are some facts I've discovered:

Hundreds of churches have been destroyed, tens of thousands of Christians have been slaughtered by Islamic terrorists while millions of Christians have been forced from their homes. Believe it or not most countries, (including the US currently) will not take in these Christian refugees or at least very few, while those same countries are allowing Muslims to flood their borders.  The Christians who don't flee and decide to remain behind get tortured, gang-raped, and killed.

For the first time in 2000 years, there are NO Christians left in Mosul, Iraq. More than 100,000 Christians have been forced to pack up and leave for good since ISIS occupied the region. In total, more than a million Christians have fled the country since the fall of Saddam Hussein.

Horrific stories emerge of young girls being repeated raped until dead, boys and men crucified or set on fire and women sold into sex slavery.  And don't forget the beheadings we have witnessed in the news.

Then I saw the souls of those who had been beheaded for their witness to Jesus and for the word of God,  Revelation 20:4

(Extremely interesting that the Bible talks about our enemies "beheading" us. Not exactly a modern day execution practice. Well, unless you're an Islamic terrorist, I guess)

In March of this year, a 278-page report was released documenting that Christians in the Middle Ease are indeed facing genocide. The report is the result of a fact-finding mission to Iraq and contains a legal brief sent to Sec of State Kerry as well as extensive documentation and testimonies of victims of Islamic State militants.

The report lists many acts of violence, displacement, theft, hostage-taking, and sexual slavery, but new reports are surfacing daily, Carl Anderson, who spearheaded the compilation of the report, said" "As comprehensive as this report is, we believe that it may only be the tip of the iceberg....Over and over again, we have found that as bad as we know things are and have been, the facts are worse, and the atrocities are more numerous"

The Islamic State has made explicit statements of its intent to fight Christians in its magazine Dabiq, the report states, speaking out against Rome, the Pope, the "crusading armies" of Western powers, and Coptic Christians. They have "established a clear intent to destroy Christians as a group and Christianity as a religion."

MaryLu here:  Does your church even mention this?  I know the church I've since left never  said anything about these atrocities afflicting our brothers and sisters.  I guess it's not a popular topic in church. I mean, we wouldn't want to upset anyone or drive anyone away.

Here are the words of Jesus:

‘Come, you blessed of My Father, inherit the kingdom prepared for you from the foundation of the world: 35 for I was hungry and you gave Me food; I was thirsty and you gave Me drink; I was a stranger and you took Me in; 36 I was naked and you clothed Me; I was sick and you visited Me; I was in prison and you came to Me.’
37 “Then the righteous will answer Him, saying, ‘Lord, when did we see You hungry and feed You, or thirsty and give You drink? 38 When did we see You a stranger and take You in, or naked and clothe You? 39 Or when did we see You sick, or in prison, and come to You?’ 40 And the King will answer and say to them, ‘Assuredly, I say to you, inasmuch as you did it to one of the least of these My brethren, you did it to Me.’

Perhaps you belong to a church or group of Christians who are concerned about this and are doing something to help. I hope so. I pray we all step up to the call of God and the cry of our fellow Christians. Wouldn't we want them to do the same for us?

There are many organizations who are sending people to rescue and help persecuted Christians. Here are a few that I know of.  (And now, I'm not being paid to mention them.)

If you can't afford to give, please pray! Pray daily, hourly, and fast as God calls.  God Bless!