God, Romance, and the Jewish Wedding

Let not your heart be troubled: you believe in God, Believe also in me. In my Father's house are many mansions: if it were not so, I would have told you. I go to prepare a place for you. And if I go and prepare a place for you, I will come again, and receive you unto myself; that where I am, there you may be also. John 14:1-3. 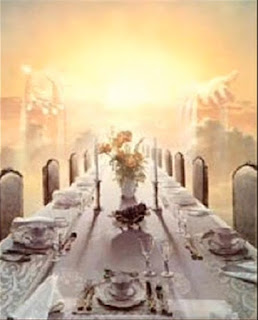 There's such romance and richness in what Jesus said here that we miss as modern Christians. Hence,I've been studying ancient Jewish wedding practices to help shed light on the true meaning behind Jesus's words. I guarantee you will be amazed, blessed, and truly see our Lord in a different light.

1. Betrothal   This was more than a simple engagement we think of today. This was actually a marriage covenant. The groom would leave his father's house and travel to his bride's house where he would sit down with the bride's father and negotiate a bride price.  This is a sum of money the groom paid for the bride. (Jesus purchased us with His Blood).

If the bride price was agreeable to the young woman's father, the young man would pour a glass of wine for the young woman. If the young woman drank the wine, it would indicate her acceptance of the proposal.(Accepting the blood sacrifice of Jesus) Once the contract was signed, the bride and groom became husband and wife but they did not consummate the marriage until later. The groom returned home to his father's house for a time.

(Jesus was sent to earth by his father to purchase a bride. He paid the bride price on the cross. Those of us who accepted Him are now His bride. Jesus left earth for heaven to prepare a place for us!)

During this time when the bride and groom are separated, the groom's task is to build a home for his new bride. Often this was an added room onto his father's house. During this time, the groom also provided for the bride's living expenses and send her many gifts. The wedding chamber had to be built to the groom's father's specifications. The young man could go for his bride only when his father approved. If the bridegroom was asked when the wedding was to be, he might well say "it is not for me to know, only my father knows".  (Sound familiar? Jesus said we would not know the day or the hour of His return, but only the Father knows)

The bride spent this time, which could last up to a year, preparing herself to be a good wife. She was to be loyal to her husband in every way. If she was unfaithful, she was considered an adulterer and would be stoned to death. Her job was to make herself ready and pure and beautiful, to think only of her husband, and to await his return. Her soul purpose and thoughts were to be on him.  Since bridegrooms typically came for their brides in the middle of the night, to "steal them away"(the groom would often come like a thief in the night, often around the midnight hour), the bride would have to have her lamp and her belongings ready at all times. Her sisters or bridesmaids would also be waiting, keeping their lamps trimmed in anticipation of the late night festivities.

(We are instructed over and over as the bride of Christ to remain faithful to Him, to put Him first, to live pure and holy lives and prepare ourselves for Him. We do not know when He will return but we are to keep our lamps burning, which is a symbol of being filled with the Holy Spirit)

Finally when the father tells the groom that the room he's been building meets with his approval, he gives the groom the go ahead to go fetch his bride. The groom dresses himself in festive garments and wears a crown of gold. He gathers his groomsmen and torches and they all head out to the bride's home. This usually happened at night at a time when the bride was not expecting him.  As he approached, he would shout and blow a ram's horn to alert her to his coming.

The bride and her friends would quickly gather her things and she would be adorned in a beautiful gown. Then, together with the groom and his men, they would travel back to the groom's house with much singing and dancing. Flowers would be scattered on the street and the bride would be carried on a cart through the street wearing a crown.

We are the bride Jesus is returning for. Right now, He is preparing a place for us in His Father's House. When it is finished, He's coming back to get us. Have you ever heard a more romantic story?  Our Prince is coming!  You'll easily recognize Him. He'll be the one riding a white horse, wearing a crown, and gazing at you as if you are the most precious thing in the universe.