How easily could you be deceived ?

For false christs and false prophets will rise and show great signs and wonders to deceive, if possible, even the elect.  Matthew 24:24 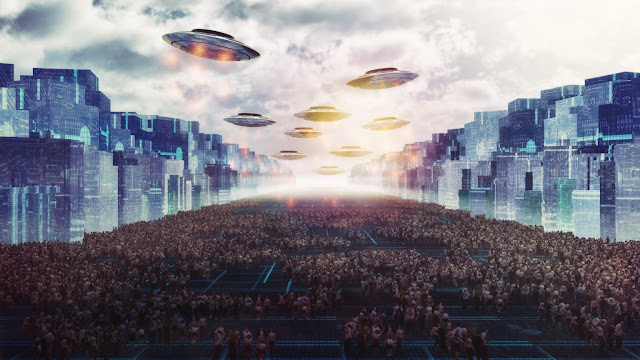 You wake up one morning, grab your coffee, and turn on the news as you usually do as you get ready for work or for your day. Only this morning, what you see on the TV screen makes you stop and stare, the shock of it causing the cup in your hand to drop and crash to the floor. But you barely notice it as your mind attempts to believe what your eyes are seeing. Aliens from outer space have come to earth. You call in your family members and together you all sit before the TV, mesmerized with what you are seeing

The aliens have come in huge numbers. They appear humanoid, and they are saying they come in peace, to help mankind, not to hurt us. Wow. You are truly shocked, yet deep down, you tend to believe what you are seeing. Why not? Scientists have been saying for years that there could be life on other planets, life far more intelligent than ours. Also, you've gotten used to the idea because of all the movies, books, and TV shows about space exploration and other life in other galaxies (Star Wars, Star Trek to name just a few)   Perhaps God actually did create other life forms elsewhere.  Perhaps He even sent them to help us. Haven't there been a great number of UFO sightings in recent years, some even validated by scientists and government officials?

So in the coming days, you get used to the idea. Aliens have arrived and they are here to help. They observed that we were ruining our planet and killing each other off and they knew they had to intervene. Besides, they seem so friendly and smart and kind.

But then things get weird. Now the aliens are saying that they are the ones who put mankind on earth, that they started life on earth. Well, that sort of makes sense, you say. After all, the theory of evolution has been under attack lately. There are just too many inconsistencies and too many holes in it to really make it believable anymore. It certainly would be possible for these superior beings to have generated life here on earth. Then, afterward, they left us alone to see how we would do. They were instructed not to intervene in the affairs of man, but we ended up being a very violent and selfish people, killing each other off in wars and committing horrific acts of cruelty toward each other. So, they had to do something. They sent one of their own disguised as a human to teach mankind how to behave. His name was Jesus.

Wait, you say. But Jesus was God. That's what you believe, anyway. That's what the Bible says and what you've been taught. But these aliens are saying He was one of them, sent by their leader, also known as "The Father", to help mankind get back on the right track.

Could that be true? You are confused and don't know what to think. Yet, these aliens are so smart. Their technology is so far advanced and they are going about helping people over the entire earth. Wait, now Jesus appears in the sky!  He's coming down from one of their spaceships in the clouds, and everyone on earth sees Him.  He lands and goes about performing miracles just like he did when he was here before. But they really aren't miracles. They are simply advanced technology and even more proof that these aliens are so far above humans in intelligence  that we seem like just ants to an Einstein.

Now, this is starting to make sense to you. Maybe there really is no God. Maybe what humans worshiped as god throughout earth's history has been these aliens, who are really like fathers, like gods to us mere humans. Maybe they can teach us how to live better lives and not fight with each other. Maybe Jesus is truly one of them. How can you deny that you've been watching him traveling across the earth helping people and now he's setting up his permanent residence in Jerusalem. Just like the Bible says.

Whoa, wait a minute!  Hundreds of thousands of people have suddenly disappeared from the earth.  Panic and chaos rule the streets until this "Jesus" addresses the world and tells them that those "Christians" who clung to their false beliefs about Jesus being God and who refused to follow the new order of the Aliens and the real Jesus, well, they have been taken away to be reprogrammed. It was determined that they had a mental disorder which prevented them from accepting the truth. Never fear, they are well and safe and will be returned after their reprogramming.

Okay, that makes sense, you say.


So, put yourself in this person's shoes. How strong is your faith? What would you believe?