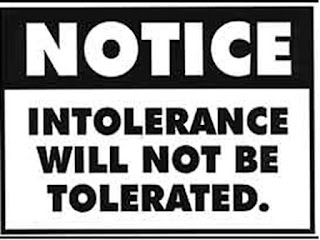 We hear much about intolerance in our culture today. The funny thing is that when I was growing up, being intolerant of certain things was a good thing. Intolerant of school bullies, as an example. or intolerant of liars, cheaters, back-stabbers. Of course as a society we should be intolerant of murder, rape, bigotry, abuse, theft and violence of any kind. Yet for some reason being labeled intolerant has now become as bad as being called racist.

I guess it depends on what you're intolerant of. If someone is not tolerant of something another person is tolerant of, then the first person must be intolerant, right? Or is a matter of perspective? I mean, I thought we lived in a relativistic society where everyone is free to do whatever makes them happy. Remember the old songs in the 70s with lyrics such as "If it feels good, do it." or "If you can't be with the one you love, love the one you're with."

The problem with complete tolerance of all behavior in a relativistic society is that eventually someone's tolerance is going to step on someone else's intolerance.  You may be a firm believer in letting everyone do whatever feels good but when that person breaks into your house and takes your things, you suddenly change your mind.

Hence, in any civil society we must have rules to inhibit people from running around doing whatever they want. These laws, when broken, have consequences. If there were no laws, we would have chaos and it would become a survival of the fittest world. Not a very pleasant place, I assure you.  So, the question is, do these laws make our government intolerant?

I read an article by a group which ironically call themselves ThinkProgress in which the writer blamed Christians for the Orlando shooting, saying it was our intolerance of gays and gay marriage and our anti-islamic sentiment which promoted the terrorist to kill all those people.   This isn't the first time Christians have been called intolerant and been blamed for horrific acts, and I guarantee it won't be the last.

So, I got to thinking about Christians and intolerance. Are we intolerant? Should we be intolerant? Or is our intolerance pushing away the very ones we want to reach with God's love as some Christians will say.  I think the first thing we need to ask ourselves is "Is God Tolerant?"

Don’t you realize that those who do wrong will not inherit the Kingdom of God? Don’t fool yourselves. Those who indulge in sexual sin, or who worship idols, or commit adultery, or are male prostitutes, or practice homosexuality, or are thieves, or greedy people, or drunkards, or are abusive, or cheat people—none of these will inherit the Kingdom of God. 1 Corinthians 6

But the fearful, and unbelieving, and the abominable, and murderers, and whoremongers, and sorcerers, and idolaters, and all liars, shall have their part in the lake which burneth with fire and brimstone Revelation 21:8

I would say based on many Scriptures, not just these, God is highly intolerant of one thing and one thing alone. SIN. Call it sin, wickedness, evil, our Holy God is highly intolerant of it. So much so that He sent His only Son, Jesus, into the world to take the punishment for ALL our sins so that those who become His followers are cleansed from their sins and can have life eternal!  Once we give our life to Jesus, we must realize that because we are now being molded to be more like God, we are also to be intolerant of sin. But here's where we get it wrong.

We should not tolerate sin among those who call themselves Christians, but among those who are lost, we are to tolerate it.  Yup, I said tolerate it.  That doesn't mean you agree with it or approve of it. It just means that you don't mention it, don't accuse, condemn or point the finger at those who commit  sin. Why? Because they don't live by the Word of God, neither do most even know it, nor do they pretend to even care about it.

Listen to what the Apostle said on the subject:
When I wrote to you before, I told you not to associate with people who indulge in sexual sin. But I wasn’t talking about unbelievers who indulge in sexual sin, or are greedy, or cheat people, or worship idols. You would have to leave this world to avoid people like that. I meant that you are not to associate with anyone who claims to be a believer yet indulges in sexual sin, or is greedy, or worships idols, or is abusive, or is a drunkard, or cheats people. Don’t even eat with such people.  1 Corinthians 5:9-11

The only people Jesus condemned for their sin were the religious leaders of the day. Think about that. Everyone else, he merely loved and preached the gospel to.

So, are Christians intolerant? We should definitely be intolerant of sin among our own ranks. But with the lost of this world, rather than condemn them, we should make the most of every moment to show them the love of God and tell them the good news of the Gospel. (not the watered down version but the full Gospel, which includes the judgement of God for those who reject Jesus.)   That's what Jesus did, and if we call ourselves His followers, certainly we should follow His example.

In truth, everyone is intolerant of something, and in our ever-growing permissive society, Christians are going to appear more intolerant than most. But let's do our best to keep that intolerance among our own and instead just share the love of God with the people of the world. Who knows, we might actually drag a few of them from the darkness into the light.