Are we confused about lust and love? What is the difference? 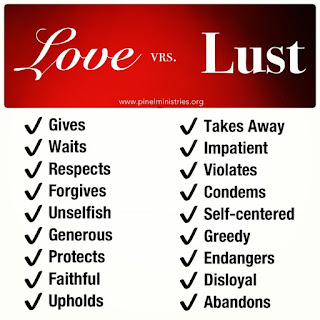 The more books I read and tv-shows and movies I watch, the more I am convinced that our society no longer distinguishes between lust and love. I'm not even sure they know the difference any more. Most modern romances go something like this:

Of course things always work out in the fantasy world of TV and movies. But is this reality? The divorce rate in America is well over 50%, and that doesn't include the couples who choose to live together and not get married, but who later separate.  One of the causes, I believe, among many others, is that people confuse lust for love.

A story from the Bible illustrates this problem perfectly.

Absalom the son of David had a lovely sister, whose name was Tamar; and Amnon the son of David loved her. Amnon was so distressed over his sister Tamar that he became sick; for she was a virgin. And it was improper for Amnon to do anything to her.  2 Sam 13

Amnon was sick with love for Tamar, so much so, that his cousin, Jonadad finally asked him what was wrong with him.

Amnon's reply was   “I love Tamar, my brother Absalom’s sister.”

So, Jonadad told Amnon to pretend he was ill and ask that Tamar come and take care of him. Then when she was with him alone, he could lie with her.  When he accosted her, she replied

No, my brother, do not force me, for no such thing should be done in Israel. Do not do this disgraceful thing! And I, where could I take my shame? And as for you, you would be like one of the fools in Israel. Now therefore, please speak to the king; for he will not withhold me from you.”  However, he would not heed her voice; and being stronger than she, he forced her and lay with her.  2 Sam 13:12-14

In other words, he raped her. Even though she said she would be happy to marry him.

It's actually a really sad story because Tamar lived the rest of her life in shame and never married. Yet, what a great illustration of lust vs love.  Amnon had a great physical desire for Tamar that he confused with love. Once that desire was satiated, he no longer cared at all for her.  In fact, he loathed her.

Lust is selfish and self-pleasing, controlling, overwhelming, forceful, demanding, taking
Love is unselfish, giving, caring, it exhibits self-control, is patient, putting the other's needs ahead of your own

Attracting between men and women is a natural God-given thing. But when the idea of physical pleasure with that person begins to control our thoughts and actions, when it is all we think about and all we look forward to when we are with that person... when we look at them as mostly objects to satisfy our needs, then we do NOT love them. We may think we do because we "can't get them out of our heads" and "think about them constantly"  but it is a selfish love, which isn't love at all.

Yet our society promotes lust, packaging it up in pretty wrapping of natural desire and love, and making it acceptable to jump in the sack with whoever we desire. But as you can see from the story above. Lust NEVER lasts. It's like a flame from hell that can be extinguished within minutes, leaving both parties empty and ruined.

While lust takes only minutes to grow, true love, real love takes time to develop. You can't really know someone in a week, a month... it takes years to really know a person's heart. Love develops over time as you get to know someone and spend hours with them. But if you allow Lust to control your relationship and head right to the bedroom, you may never spend those hours getting to know the real person because the hours you spend together are consumed with physical pleasure. Even if you do end up getting married, your relationship is built on Lust, which NEVER lasts. I'm not saying that these marriages don't work out. Some do. Some couples grow to truly love each other. But more often than not, they end in failure because they never really loved each other as they should.

LUST clouds your judgement and prevents you from seeing the person for who they really are. All you see, all you feel is your strong desire for that person. Lust puts a veil of desire over the object of your lust so that you never truly know them or what's in their heart. Don't fall for its tricks. It is a relationship killer and will ultimately destroy your life.

This may seem an odd post coming from a romance novelist. I love romance, I truly do. But I endeavor in all my books to have my characters fall in love slowly over time as they reveal more and more of their hearts to one another. Of course there's an initial attraction, which is completely natural, and fun and flirty!  But they never allow it to grow into lust.

I'll end with this warning to young girls out there. Men will tell you they love you in order to get you into bed. They may even believe it as Amnon did in the above story. Don't be fooled!  The best way to determine if a man loves you or is in lust with you is to tell him that you do not intend to sleep with him until after marriage, and also that you don't intend to rush into that either. If he sticks around, he loves you. If he leaves, he never did.