Prophecy hidden within the parable of the Good Samaritan? 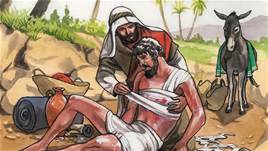 The Bible is an amazing book. The more I delve into it, the more I realize that the only possible explanation for its brilliance is that it was Divinely inspired. No other book on earth has 66 books written by forty different authors from three continents, speaking three different languages and spanning 2000 years, ALL of which tell the same story:
As if that wasn't enough proof of Divine authorship, the Bible is full of prophecies, most of which have already come true! Who knows the future but God?

I recently read a book called The Divine Code by Steve Cioccolanti, who is the pastor of a church in Australia and the founder of Discover Ministries. ( http:/www.discover.org.au )  Pastor Steve goes into great detail about the various numbers and patterns found in Scripture. It is truly fascinating. One particular thing I found very interesting was a possible deeper meaning behind the Parable of the Good Samaritan.  See if you agree.

Remember the Parable Jesus told of the Good Samaritan? Most people, even non-Christians, have heard of it. It is found in Luke 10:30-34, and I'm posting it here for those who forgot.

And Jesus answering said, A certain man went down from Jerusalem to Jericho, and fell among thieves, which stripped him of his raiment, and wounded him, and departed, leaving him half dead.
And by chance there came down a certain priest that way: and when he saw him, he passed by on the other side.
And likewise a Levite, when he was at the place, came and looked on him, and passed by on the other side.
But a certain Samaritan, as he journeyed, came where he was: and when he saw him, he had compassion on him,
And went to him, and bound up his wounds, pouring in oil and wine, and set him on his own beast, and brought him to an inn, and took care of him.
And on the morrow when he departed, he took out two pence, and gave them to the host, and said unto him, Take care of him; and whatsoever thou spendest more, when I come again, I will repay thee.

I've always thought this was a cool story with the moral of helping and loving your enemy, right.  But what if it has a deeper allegorical meaning?  Check this out.


Pretty cool, eh?  I thought so.  Honestly, I've never seen this great reference to the Gospel story in this parable, and it makes me wonder how many more treasures are hidden in the Word of God.

I hope that blesses you today!