What's up with Racism? 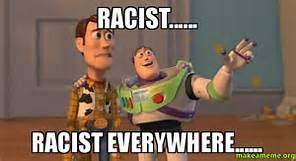 I hope you'll allow me a little vent today.  It may make some of you mad. I hope not, but something
needs to be said. Our country, our world has gone crazy in so many ways. One of them is this resent uprising of racism. Or is it really racism?

I grew up in South Florida where there were many African Americans, and I can honestly say I don't have a racist bone in my body. I could care less whether a person is white, black, red, yellow, turquoise, or purple. Honestly.  And I truly believe MOST Americans feel the same way. Yes, there are a few true racists on the fringe of society, but their numbers are few. I have African American friends, Asian friends, and my daughter married a Mexican. I've never known anyone who was a racist. In fact, during most of my life until recently, rarely did anyone get accused of being a racist.

So why is everyone pointing a finger at everyone else now, accusing them of racism? It doesn't make sense, especially in light that WE THE PEOPLE elected a black president for TWO terms!  In all honesty, I didn't vote for him, but it had nothing to do with the color of his skin but rather his beliefs and his policies. In fact, in this recent election, I intended to vote for Ben Carson, an African American, AGAIN not because of the color of his skin but because I liked his views on things.

It seems the only people we can actually pick on without being called racists are white males. We can say anything bad about them (especially rich white males) and nobody says a word.

Whether or not you love or hate Donald Trump (The Republican nominee for President) I believe the accusations that he is a racist are unfair.  In his crass way he has said two things that have set off the haters. One, that he would ban all Muslims from the country UNTIL we can instill a way to check their backgrounds for any terrorist ties. And Two, that he would build a wall on our borders to keep illegals out.

I'm sorry, but keeping a people-group out of the country who have declared war on us and call us the Great Satan and who have promised to annihilate us just makes plain sense to me.  We have no idea who these Syrian Refugees are, what their background is, who they are affiliated with, nothing. Granted, many of them are probably peaceful and just want to escape the terror happening in their country. But odds dictate that some of them are using our generosity as a way to sneak in and destroy us from within. I don't believe Trump hates Muslims or Syrians. I believe he sincerely wants to keep our nation safe.  Would we have let in thousands of Germans or Japanese during World War II without vetting them? No. I don't think so. Yet no one called it racism back then.

And the Wall.  Our laws state that if you come into this country without the proper papers, you are committing a crime.  Hence, you are an illegal alien. I don't think Trump cares whether you are black, white, Mexican, European, Asian, or from another planet, he simple wants to uphold the law of the land. Don't like it? Want open borders? Then elect people who will change the law.  In the meantime, we should uphold the law and keep these people out. I know most are people just looking for a better life, but there are always some who come over to milk the system and burden the taxpayer even more than we are. Also, who's to say terrorist aren't sneaking across as well?

Call me crazy, but this just makes sense to me. Is Trump a racist? I don't know him personally, but I do know that he works with and has hired people of all nationalities, that he has friends of all nationalities and religions. Maybe he is, maybe he isn't, but he is not a racist because of his two statements above.  Yet that's all you hear all over the biased media. Yahoo, Facebook, CNN, CNBC, even FOX...  He's such a racist! They play little clips of his speeches and then point their fingers. "Ah, ha! You heard it for yourself."

I believe it's the media's fault for this recent surge of Racist accusations.  When I was a kid, you could trust your newscasters. Now, everyone has an agenda. They slant all the stories in favor of their own opinions. Do yourself a favor and question everything and do your own homework.  Why would they want to cause strife in our country? That's a good question and one worth investigating. I have my own opinions on that. (See Saul Alinsky's Rules for Radicals)

So, are we a nation full of racists? Sorry, but I don't think so.  And I'm flat out tired of having our freedom of speech restricted for fear of being labeled as such. You can't criticize anyone who isn't a white male without being called a racist. It's ridiculous, and the American people need to wake up and stop this before it gets out of control.