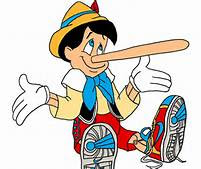 Does anyone tell the truth anymore? Used to be you could trust the media, some politicians, and especially your pastor, but these days it seems everyone is suspect. Lying has become an acceptable part of our culture as long as we don't get caught or as long as it serves a good purpose. Yet because we are surrounded by lies, how do we know what to believe?  It is my strong opinion that most of the media, if not all, is lying to us about many things. Either they are lying or they aren't reporting what's really going on in the world and in our country and government. If you are not getting your information from a variety of places, you probably don't know the truth.

Everyone lies to their neighbor; they flatter with their lips but harbor deception in their hearts.
Psalm 12:12


Jesus and His Apostles warned us over and over about being deceived.  Even in the Old Testament, the prophets of God warned adamantly against listening to false prophets and being deceived by wicked spirits who would lead the people astray.

And Jesus answered and said unto them, Take heed that no man deceive you. Matt 24:4
For there shall arise false Christs, and false prophets, and shall shew great signs and wonders; insomuch that, if it were possible, they shall deceive the very elect. Matt 24:24

Why do we think we are any better or any more equipped to not be deceived than God's chosen people? The truth is, that if you actually believe there's no way you can be deceived and lured away from God, then you are probably the most vulnerable.  Our enemy is very wise. And because I believe there's a very powerful deception soon coming on the world, I decided to write four blog posts listing what I believe to be five things we can do that will protect us from deception.

The first of these is that we must KNOW God. Many believers today would say "Sure, I know God." But do they really?  How do they know Him? From what they've heard in sermons?  Read about in Scripture? What does "Know" mean?  Unfortunately in our English language we use "Know" in a variety of different ways. For instance, we use the word "know" for a mere casual acquaintance and also for a close friend.  Yes, we "know" our neighbor even though we've only spoken to him once or twice. Of course we "know" our best friend.  When we use the word "know", more often than not, it means a casual knowledge of. It may be something we've merely heard about or studied in general or something we saw on TV.

But knowing God is not a casual kind of know. That kind of know is a very intimate, personal, close, deep knowledge of a person. The kind of knowledge where you know a person so well you can predict what they will do or say next, that you understand their personality, their faults, their needs, their dreams. You know their scent and what every unique expression or inflection means.  It's the kind of intimacy found among very close friends or spouses. This is what God expects of us toward Him. That's why we are the Bride of Christ!

If we have that intimate knowledge of God and His character, we could never be deceived. If someone came up to you and told you that your spouse of 30 years was really a serial rapist or mass murderer, would you believe them? Why not?  Because you know your spouse. You know their character. It should be the same for us. We should be have such intimate knowledge of God's character that we could never be fooled into believing anything that went against what we know of Him.

Trouble is, we don't get to truly know God through listening to an occasional sermon or even from a causal reading of the Bible. Yes, those things help us to know OF Him and About Him, but they do not help us know Him.

What is the best way to get to know someone?  Yup. Spend time with them. Ask anyone who has been married a long time and they will tell you that it often takes years to really know someone. Years of spending time together in lots of different situations and circumstances.  They didn't get to know that person by reading a book on them or by listening to someone else talk about them. They got to know them by time spent in that person's presence. Why should we treat God any differently?

But it's boring just sitting quietly and talking with God. I can't see Him or hear Him. Really? Then you really don't know Him. He will talk to you if you ask Him and if you believe He will, and He'll do it in the most surprising and fun ways. You'll find He has a great sense of humor. I suppose He'd have to to be able to deal with us! Spend time with Him: In your quite place, in the car, while doing laundry or at work, you can have an ongoing chat with Him wherever you are and whenever you want.

But the important thing is: Get to Know Him!  That way you'll be less prone to be deceived when someone tells you something that goes complete against His character and His Word.

And such as do wickedly against the covenant shall he corrupt by flatteries: but the people that do know their God shall be strong, and do exploits.
Daniel 11:32


Tune in next Monday for Part 2