The Tower of Babel - The beginning of all occult religions 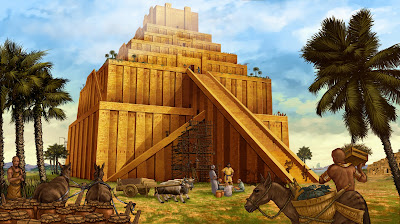 Many of us know the story of the Tower of Babel in Genesis 10-11, how mankind attempted to build a huge tower that would reach to heaven and how God gave them all different languages to scatter them.  But as I have learned recently, there's so much more to the story than that. And so much more that is very applicable to our present culture and present battle.

Nimrod was a descendant of Cush, who was one of Noah's sons. He is described as a mighty warrior, a hero, famous, etc but in truth, Nimrod was a tyrant. His name literally means "The Rebel" or "Let us revolt" Some commentators believe he might have been a nephilim (a descendant of fallen angels mating with women) due to the adjectives used to describe him that were also used to describe the mighty heroes of old.

Regardless, Nimrod decided to settle in the same location as the garden of Eden where he conquered 7 cities and built the very first worldly empire. He was the first emperor of the first great empire that would soon be called Babel, which later became Babylon. Any reader of the Bible knows that Babylon is always depicted as the devil's city. It is the city of abominations and immorality and always opposed to God's city of Jerusalem. 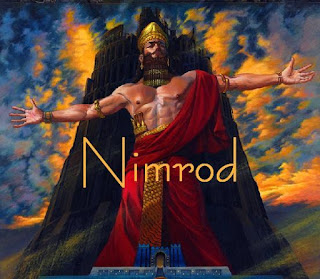 Nimrod used sorcery to enhance his rule. He was associated with fire, something he used to invoke fear in all his enemies. Fire is associated with the sun, so eventually Nimrod became known as the Sun God.  He married a women named Semiramis, who was a brothel keeper in one of the cities he conquered. To cover up her sordid past, he made up a story that Semiramis was a virgin who was sprung from the sea. She was a very wicked woman, extremely beautiful, grossly immoral, and a queen who eventually became more powerful than Nimrod. It was her idea to tell the people that she and Nimrod were gods. He was the sun god and she became the moon god. By doing so, they invoked fear and obedience among the people, for who can go up against a god? Religious authority is the best way to gain control. More on that in a minute.

They also invented a mystery religion that centered around the stars and was the antithesis of God's salvation story. In their story, it is God who is an evil tyrant over mankind and Satan is the one who set man free from God's rule and opened man's eyes to all the pleasures of life.  It is Satan who will one day return as a man and defeat God and take over rulership as god.  This new religion is depicted in the stars and is still around today as astrology.  Astrology is nothing more than a worship of the stars and the sun and moon as gods.  This was the beginning of the occult and worship of Satan.

Now we come to the tower. Nimrod and Semiramis wanted to build a pyramid-like structure that could look over the entire city from their throne room on the top. The idea wasn't that they would build it so high as to reach God, but that they would perch themselves up upon a mountain just as God is described as doing in Scripture.  Perhaps you are familiar with the symbol of the All-seeing eye. 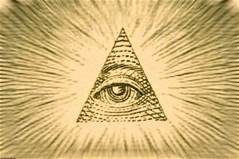 Nimrod became associated with this symbol as the one who could sit atop his unholy mountain and see everything his people were doing.  It is essentially behind the scenes a symbol of Lucifer's eye. Oddly, we find it here in America on the back of our one-dollar bill. (more on that in another post)

So, the tower was an attempt by Nimrod (and Satan who was controlling him) to become God. It it the oldest lie in the world from our enemy.... that we can become gods. That we have no need of a savior. That is why God scattered the people.

Nimrod meet a violent death, some say at the hands of his wife, whom he discovered to be carrying another man's child.  After Semiramis had Nimrod killed she gave birth to a son and told the people that he was Nimrod resurrected. Hence we have Satan once again copying God and creating an unholy trinity. Semiramis began to call herself "Mother of God" and "Queen of Heaven". 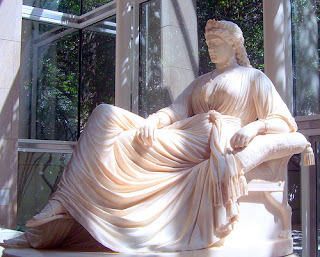 After Semiramis's death she and Nimrod continued to be worshiped as the Sun god and Moon goddess, but by different names throughout history.  Nimrod became the ancient god Baal, which some of you may remember from the Bible. Semiramis became the goddess Asherah in the middle east and Isis in Egypt, etc.  If you trace their threads throughout history, you'll find them everywhere. Why? Because this is Satan's master plan to defeat God, to become God.

So, why should we care?  Because though the physical empire of Babylon is no longer on earth, the spiritual empire of Babylon is very much alive and well and ruling.  Babylon is the source of evil. It is the Satanic system of rebellion against God's plan of salvation. If anything, it has grown stronger in these last days and will eventually manifest itself in one last empire, ruled by an emperor who will make Nimrod and Hitler look like mother Teresa.  You think religious belief is dead?  It is not. The AntiChrist will rule by religious authority just like all the major empires of the past, Babel, Egypt, Rome, Catholic Church, Islam.  He will declare himself god and demand worship just like Nimrod, the Pharaohs, the Popes of the early church, the Emperors of Rome.  Occultism is on the rise as is the worship of Satan. Believe it or not, there are a group of people who have allied themselves with our enemy in exchange for power and money in this world, just like every power-hungry tyrant before them. It is my belief they will soon make their move.

Standing afar off for the fear of her torment, saying, Alas, alas that great city Babylon, that mighty city! for in one hour is thy judgment come.  Revelation 18:10