Washington D.C., America, and the Occult

Recently, I learned some things about my own country that in all honesty really upset me.  I was raised believing that the United States was founded completely on Christian principles and that all of our forefathers were devout Christians. Somehow that thought gave me great peace along with pride that I was born American. I still have great pride in America. I believe we have been the greatest nation on earth and the most Christian nation ever known. I also believe God's hand of providence has been on us from the very beginning despite what you will learn in this post. But having said that, let me know give you a very general outline of how our capital city was built and laid out, in addition to some other monuments.

First I must quickly define FreeMasons.  Some of you may already be aware of who the Masons are. They are a secret religious society that began hundreds of years ago that is directly connected to the occult. Today they have morphed into what some call the Illuminati. That's all I'll say here, but I suggest you do your own homework on them. 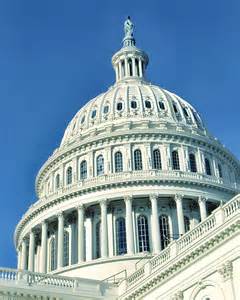 As some of you know, the Capitol is the main seat of government in our nation's capital. It is where congress meets and where all major decisions are made that affect our country. But did you know that the building itself was designed and built by freemasons?  In fact, the cornerstone of the capitol building was laid with Masonic honors on Sept 18th, 1793 under the auspices of the Grand Lodge of MaryLand.  It may pain some of you to know that George Washington presided over the ceremony in full Masonic attire, assisted by several prominent Masons.

At the top of the capitol building stands the statue of  the goddess of reason or freedom who faces east toward the sunrise. She is called Columbia throughout the US, but she is also known from history as Asherah, though you won't find that in history books. She was also designed by a freemason. (She is also the logo for Columbia pictures, the movie production company) 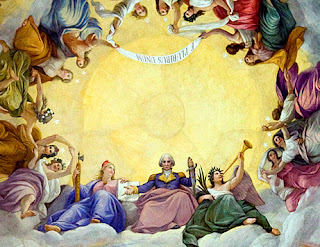 If you go inside the Capitol and look up into the dome, there is a painting at the top called Apotheosis. This also was painted by a famous Mason who also painted many murals at the Vatican. The name Apotheosis means "Exaltation of a subject to a divine level".  A closer look at the painting shows they are exalting George Washington himself. We also see the goddess Columbia in the painting, along with
a host of ancient gods and goddesses from pagan religions (Atlantis, Venus, Vulcan, etc... all demonic gods)

Directly beneath the dome is the crypt and in the middle on the floor is a bronze sun symbol. (for the sun god)  This symbol is geographically the center of Washington DC.  There are also many pagan god statues littered all over the Capitol building, including the god Mars found near the entrance.

The layout of Washington D.C,
In many occult circles the dome represents the female womb and the obelisk represents the male reproductive organ. By placing these two in a straight line with one another, occultist believe a third 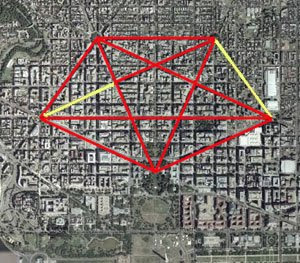 spiritual entity is born, a sort of spiritual energy or power.  You'll see this same formation at the Vatican.  In fact, the layout of the city is in the form of an inverted pentagram. Due to space constraints here, I'll let you do your own homework on this one.

The Washington Monument
Have you ever wondered why there is a massive obelisk in the center of the city? Did you know that the obelisk has a very satanic history associated with it? It is actually the phallic symbol, which is the male sexual organ (sorry to be so graphic).  It is a symbol of power and was often used in occult rituals through the ancient past as a form of worship of the god of fertility. This same symbol was similar to the Asherah pole around which people would dance and engage in sexual orgies as a form of worship.  It is where we get the stripper pole from. But I digress.  There is also a similar obelisk at the vatican. 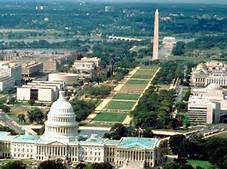 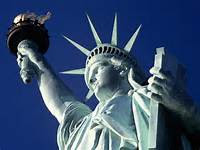 and by many other names.  The ancient goddess Libertas was a roman goddess of liberty and freedom who promoted the idea of the freedom to do whatever one desired. She was promoted as the goddess of prostitution because she promoted sexual freedom.   The Statue of Liberty holds in her right hand the Masonic torch of enlightenment.  She was erected with full masonic ceremony and at the base sits a plaque dedicated to the FreeMasons of New York.  Her crown of 7 spikes represents the enlightenment of the sun god

The US One dollar bill is full of masonic symbols.  The Circle on the left contains the all-seeing eye sitting atop a pyramid.  As most of you know the all seeing eye is the eye of Lucifer and the pyramid represents him sitting atop his throne or mountain keeping an eye on mankind.  The words around the eye on the dollar bill are: "Annuit  Cceptis Novos Ordo Seclorum" which means "Announcing the Birth of the New World Order".  The Occultist seek to place the world under one world government, and we can see here that they have been planning this for a long time.
The symbol on the right we are told is the American Eagle, but in actuality this is a Phoenix.  The Phoenix from the flames symbol means order from chaos. It spreads the idea that through pain, wars, death, and destruction, order will emerge.  There are 13 leaves in the Olive branch in the Eagle's left claw, 13 stripes in the shield, and 13 arrows in its right claw.  In its beak is a banner with the words. "E Pluribus Unum" which means "Out of the many One" again, a secret reference to the New World Order. Above the Eagle's head is a crest of the sun god and within the crest are 13 stars that are in the shape of a hexagram.  (For those who don't know the meaning of the hexagram. It has 6 points, 6 angles and 6 plains and hence represents the number 666 and is an occult symbol)

There are many more occult symbols found in Washington DC and other cities in America and in many of our historical objects, but I hope this gives you a brief overview of some of them.  If you haven't heard this before, you are either thinking I've lost my mind or you are in complete shock.  However, I highly suggest you do your own homework on this. Remember that often times they will give these symbols very innocent meanings, but it's important to look deeply at each symbol and research its past to find out the truth.  I would also like to note that George Washington often spoke of God and wrote some of the most beautiful prayers to our Father. However it is true that he was a Mason. Whether or not he was aware of its occult ties, I have no idea.

Having said that, and even knowing that many of our founders were involved in the occult, I still believe God blessed the USA because there were many true Christians here. It was indeed a Christian nation for many many years, and I thank God for this country.  However, it does appear that there was another agenda in its founding that may be coming true in these last days.  God help us all.