Are we the Laodicean Church? 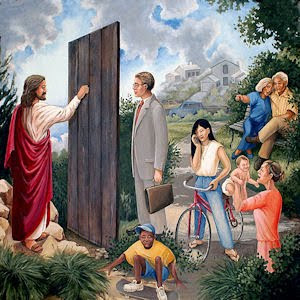 If you want to know what I don't celebrate Halloween and why I don't believe Christians should, please read this ARTICLE

And to the angel of the church of the Laodiceans write,
‘These things says the Amen, the Faithful and True Witness, the Beginning of the creation of God: “I know your works, that you are neither cold nor hot. I could wish you were cold or hot. So then, because you are lukewarm, and neither cold nor hot, I will vomit you out of My mouth. Because you say, ‘I am rich, have become wealthy, and have need of nothing’—and do not know that you are wretched, miserable, poor, blind, and naked—   Revelation 3:14-17

According the State of American Theology Study 2016

64 percent of Christians agreed with the statement “God accepts the worship of all religions, including Christianity, Judaism and Islam.”

Less than half of those surveyed also believe abortion is a sin.

84 percent of evangelicals agreed those “who do not personally trust in Jesus Christ” are destined for hell.  What about the other 26%?  These are Evangelicals!

70 percent of evangelicals agreed with the statement “Jesus is the first and greatest creature created by God"   Huh? Created?

Nearly 60 percent of Christians in America view the devil as only a symbol of evil.

Add to these incredible stats that the Episcopal church has ordained homosexual priests, while in fact many Christians now view homosexuality as NOT sinful.

What is going on with the church in America?  What are our pastors preaching from the pulpit that would cause such heresy to form?

I may have a different view than most of you. I haven't been in church my entire life. I was privileged as a teen to attend a Holy Spirit filled church led by one of the world's greatest Bible Teachers, Derek Prince. But I drifted from God for many years and didn't return to Him until my 30's.  Since then I've had a hard time adjusting to the lukewarm churches here in California. Though they preach the Gospel of Grace through Faith in Jesus, and most of them I've attended believe Jesus is the only way, the sermons are often so watered down with feel-good messages about God's blessings and grace and mercy and how He wants to help you in this life, that honestly, I've become discouraged.  Churches seem more like social clubs with their pot-lucks and tennis clubs and baseball teams. We concentrate too much on this present life and how God can help us here, that very little is said about heaven, hell, spiritual warfare, the Holy Spirit, end times, or the fundamental beliefs of our faith.

I'm not saying that some people aren't getting genuinely saved, or that churches don't do a lot of good. There are many "good" people in churches who give to charity and volunteer to help their communities. All good things. But is it enough? And is it done with the right attitude?

Jesus says in the above passage. "I know your works..." which means that the church was doing good things in His name. But were they doing the right things? The things He wanted them to do for the right reasons and with the power of the Holy Spirit?

And that's one of the biggest problems. Pastors don't teach on the power of the Holy Spirit available for those who believe.  They preach the Gospel, but deny its power and hence leave people with an empty religion that won't hold their interest.

We have lost our salt and light. In many cases, it's hard to distinguish between the lives of "Christians" and the lives of non-believers. We have compromised with the world in the guise of "getting along", "maintaining peace".  No wonder our country is in such a mess!  We are Christ's Ambassadors, but we have done a poor job at representing Him.

Carl Gallups, pastor of Hickory Hammock Baptist Church and author of the new book “When The Lion Roars: Understanding the Implications of Ancient Prophecies for Our Time,” sees an End Times significance in the increasing apostasy within the church.

“Even many of America’s so-called ‘conservative evangelical’ pastors are not addressing the biblical answers to the key issues and concerns of our times,” he said. “Accordingly, an ever-increasing number of God’s people are spiritually perishing for lack of proper biblical instruction and understanding. Even among America’s most ‘conservative’ pulpits, the vast majority never address biblical issues such as important foundational doctrine, abortion, homosexuality, evolution, the place of Israel and the Middle East in prophecy, etc.”

Gallups said most Christians will accept God’s Word intellectually but resist it once it begins to encroach on how they want to live their lives. He argues the church must preach the message of Scripture without compromise or shying away from hard truths. The costs of not doing so, he claimed, can be seen in the degraded culture of today.

“America threw away its moral compass when it discarded God’s Word as the ultimate authority for life and human conduct,” he said. “The results are apparent and they are growing more devastating to our culture by the day.”

MaryLu here:  We need to wake up before it's too late and Jesus spits us out of His mouth. We need to be on fire for God, know our Bible, be filled daily with the Holy Spirit, Love all people, Be ready to give an answer for the faith we have, walk in the Spirit (that means be in constant communication with God) , be uncompromising with the world, and purify ourselves as a bride prepares for her bridegroom's arrival. He's coming, and He's coming soon. Don't be vomited out of His mouth!