Why should we care about Rosh Hashana? 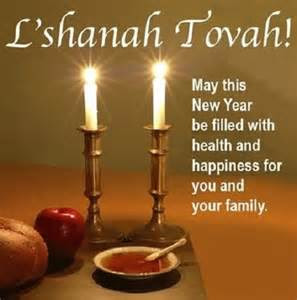 Today and tomorrow is the Jewish New Year, otherwise known as Rosh Hashana (The head of the year) This holy day is also called by the following names

So what? you may say. I'm not Jewish. Yet, doesn't the Bible say that if we are believers in Yeusha (Jesus) that we have been grafted into the Jewish vine?

Does that mean we have to celebrate the Jewish holidays? I really don't know. I DO know, however, that God instituted these Holy Days for a reason, right? Certainly a study of what they mean and entail can only enhance our knowledge of God and His will for us.

So what is Rosh Hashana?

Rosh Hashana begins a final ten-day period that ends on Yom Kippur. These are known as the High Holy Days and as the Awesome Days (Yamim Nora'im, the days of awe).  Each morning during the 30 days of the month of Elul, the trumpet (shofar) or ram's horn is blown to warn the people to repent and return to God

The Three Meanings of the Blowing of the Trumpets:

(1) First, it was a symbol of the final regathering of Israel when the Messiah comes.

(2) Second, it was a symbol of the resurrection from the dead.

What happens on Rosh Hashana?

No work is to be done.
Symbolic foods include both bread and apples dipped in honey in order to signify the wish for a sweet new year.
Time was to be spent in prayer and repentance
Time spent in synagogue listening to Scriptures read
In the afternoon following the service, the Jewish people  go out to a body of water and symbolically empty their pockets into the water.  This symbolizes God casting their sins into the depths of the sea.

No man knows the day or the hour


Unlike our days which begin and end at midnight, Jewish days begin and end at sundown.  Rosh Hashana is a rare holiday which only begins at the sighting of the new moon in the evening. Priests were sent out to watch the sky as it grew dark and as soon as they saw the first sliver of the moon, they would report back to the synagogue, where it was confirmed.  From there a shofar was blown to announce the beginning of the holiday. If the new moon was not sighted, they waited until it was or until the next day.  Hence, the phrase "No man knows the day or hour"  was often used when referring to this holiday.

I hope that, like me, you are seeing some interesting things pop out at you in the descriptions and purpose of this wonderful Holy day.  Certainly, whether we are Jewish or not or whether we join in this celebration, wouldn't it be a good thing for us all to stop what we are doing and spend some time in deep prayer and repentance?