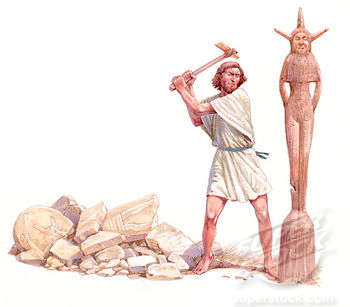 I've been reading through the books of 1st and 2nd Kings and 1st and 2nd Chronicles in the Old Testament. These are stories of the many kings who ruled over Israel and Judah (The Kingdom of Israel was cut in half after Solomon). Some people may find theses "chronicles' boring or repetitious because they basically read like a history text, listing each king, mentioning a few things he did, and then how he died. Then onto the next king. Of course there's also come really cool stories mixed in there about Elijah and Elisha!

But one thing really stood out to me during this reading. God doesn't like Compromise. Most of the kings who ruled in Israel were just plain evil (Think Ahab and Jezebel), and they got what was coming to them. But even the semi-good kings in Judah had troubles. Why? Because not one of them, except a very few, served God with all their hearts.  Yes, they may have reinstated worship in the Temple, they may have even listened to the prophets and followed God's will. They may have even demanded the people worship God and that the priests read the Scripture to them. But MOST left the high places untouched.

What were the high places? These were places of worship to other gods. Gods like Asherah and Baal and Molech. Let me give you a very brief description of these gods, but I highly suggest you do your own homework.

Asherah was a fertility goddess worshiped by the Canaanites. Worship involved a massive pole thrust into the ground which represented the male sex organ. Worshipers engaged in sexual activities around the pole with each other and with the temple prostitutes as a sacrifice for the goddess to increase fertility among them and among their crops and animals. Consequently many women became pregnant, and those babies were often sacrificed to ....

Molech, who was the fire god of the Canaanites. He represented the male principal of life and fertility while Asherah was the female. The Mo-lech idol was a large, hollow brass statue with the head of a bull and the bulging belly of a man. It was designed like an old fashioned pot-bellied stove, with the belly as the firebox. A child sacrifice laid on the hands, would roll into the fire in the belly cavity. Scripture describes this practice as "passing through the fire to Molech," Leviticus 18:21.

Baal - the sun god of the Canaanites. He was believed to be the "giver of life" and mankind was dependent upon him for providing what was necessary to sustain the farms, flocks and herds. It was he who was in charge of the rain and the weather, and man's survival was dependent upon Baal's provision. Baal worship was rooted in sensuality and involved ritualistic prostitution in the temples. At times, appeasing Baal required human sacrifice, usually the firstborn of the one making the sacrifice (Jeremiah 19:5). The priests of Baal appealed to their god in rites of wild abandon which included loud, ecstatic cries and self-inflicted injury (1 Kings 18:28).

I found it interesting that these gods were all involved in perversion and sexual immorality. Which would explain somewhat the attraction they had for many people. How many churches would be suddenly filled if we put out a notice that part of the ceremony was having sex with anyone there you wanted, or with multiple people?  Sorry to be graphic, but hey, it's the way it was.

So, why did most of these kings not tear down these poles, idols, and temples? I believe, in part, it's because they feared the backlash from the people. You see, this way, the king could both appease GOD and the people. But as you read each of the king's stories, you'll find that this compromise always caused them problems and sometimes ended in their death.

I realize that in our culture today, being sexually "free" is in vogue and being pure is prudish. But God considers sexual immorality to be one of the BIG sins.  The Scripture is full of warnings against it in every form. Why? I believe it's because the sexual act has a very spiritual component that we can have no way of understanding. But that topic is for another day.

Another thing I wanted to point out, however, is that behind these gods, there is/was a demon, a very powerful demon. So, in essence, not only were the people of Israel committing horrific acts of immorality and murdering their own children, but they were worshiping the enemies of God.

Perhaps that will give a little perspective on why God was so angry about this and why He issued warning after warning.

Compromise. We may not be purposely worshiping demons or killing our babies or committing sexual immorality, but what are the compromises in our lives? What areas of our lives do we give to God, and what areas do we hold back? What are our favorite sins? They may not seem as bad as these Israelite kings, but I assure you they are poison and will eventually destroy us. Or at the very least, keep us from living the fulfilled and adventurous life God intended for us.

Yes, we are saved by God's love and grace, but what we do with that salvation is up to us. Are we ALL IN for God? Or do we keep a couple of high places around us to please the people, or ourselves?

You adulteresses, disloyal sinners—flirting with the world and breaking your vow to God! Do you not know that being the world’s friend that is, loving the things of the world is being God’s enemy? So whoever chooses to be a friend of the world makes himself an enemy of God. James 4:4