My battle with celebrating Christmas 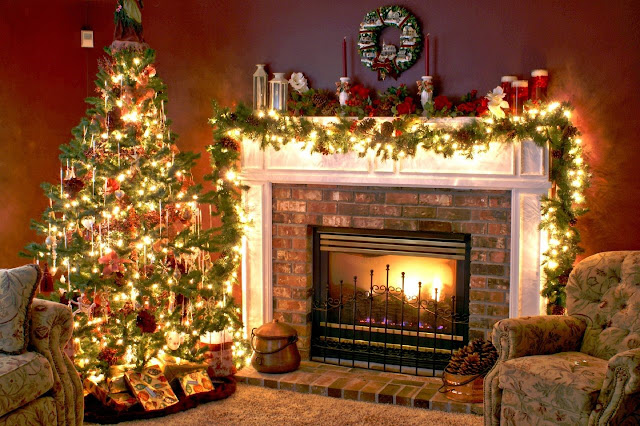 Recently I did some research on the origins of Christmas. Mainly for my own curiosity and also because I've heard repeatedly that it is a very pagan holiday. What I discovered more than shocked me.

My family has always been big on Christmas. My mother made the Holidays very special in our house. We always got a real tree and decorated it as a family. We made cookies and other goodies, had Christmas songs playing, watched Christmas movies, had fun shopping in the mall, and my favorite part? The stocking laid on the foot of my bed during the night that was full of all sort of goodies to open when I woke up  It was a magical time for me. I remember looking out the window with my sister late at night, hoping to see Santa and his reindeer.  I carried on these traditions with my children throughout the years, and after I became a Christian, I, of course, included stories of Jesus's birth.

So when I discovered it's evil orgins, it cut me to my core. How was I supposed to turn my back on the Christmas I've known all my life?

I'm not sure anyone truly knows how our current Christmas celebrations came into being. I discovered origins of the holiday way back in Roman days connected with a pagan holiday called Saturnalia, which was a week long carnival of wicked activities. It is also the time of the Winter Solstice, and more importantly the birthday of the sun god, which was a god highly revered in that time. In fact, Emperor Constantine who legalized Christianity worshiped the sun god throughout his entire life. (Most believe he was never truly converted to Christianity)  To appease both the Christians and the pagans in his empire, he combined their practices.  Here are some quotes from famous historians:

'The services of worship increased in splendor, but were less spiritual and hearty than those of former times. The forms and ceremonies of PAGANISM GRADUALLY CREPT INTO THE WORSHIP. Some of the OLD HEATHEN FEASTS BECAME CHURCH FESTIVALS WITH CHANGE OF NAME AND OF WORSHIP"  The Story of the Christian Church by Jesse Hurlbut:

"Paganism" was not defeated by the Church. It invaded the church, infiltrated it, and seduced it from within! The professing Christian Church became the "new face of paganism"! Only the "names" were changed. And in some cases -- as in "Easter" Sunday -- even the old pagan names were left in place! Will Durant, Historian

(You may have seen my article last year on Easter and how it is actually the worship of the goddess Ishtar. If not, here it is! )

"The custom of burning the Yule log began with the ancient Scandinavians, who once a year burned a huge log in honor of their god Thor. After the Scandinavians became Christians [sic], they made the Yule log an important part of their Christmas ceremonies."

"The Christmas tree, now so common among us, was equally common in Pagan Rome and Pagan Egypt. In Egypt that tree was the palm tree; in Rome it was the fir; the palm tree denoting the Pagan Messiah, as Baal-Tamar, the fir referring to him as Baal-Berith. The mother of Adonis, the Sun-God and great mediatorial divinity, was mystically said to have been changed into a tree, and when in that state to have brought forth her divine son. If the mother was a tree, the son must have been recognized as the 'Man the branch.' And this entirely accounts for the putting of the Yule Log into the fire on Christmas Eve, and the appearance of the Christmas tree the next morning"  Alexander Hysop The Two Babylons (p.97)

"The Christmas tree...recapitulates the idea of tree worship...gilded nuts and balls symbolizing the sun...all the festivities of the [heathen] winter solstice have been absorbed into Christmas Day...the use of holly and mistletoe to the Druidic ceremonies; the Christmas tree to the honours paid to Odin's sacred fir...." (p. 236).

But what about Jolly Old Santa Clause?
Although most people assume that the original "Santa Claus" was a bishop by the name of St. Nicholas of Asia Minor of the fourth century, this is not really true. Although some of this bishop's deeds later came to be associated with "St. Nick," the original "Nicholas" was once again Nimrod, the "mighty one against the Lord." The word "Nicholas" means "mighty one, powerful." Traditions of a "god" who gave gifts under an evergreen tree antecede the Asian Minor bishop by thousands of years! Among the Scandinavians it was the god Odin or Woden who left special gifts during the Yuletide season under the evergreen tree, his sacred tree!

I could go on... but I'll stop here. By the way, Jesus wasn't born in December. Most Biblical scholars believe it was sometime in September.

Believe me, my goal here is not to depress you, but to inform you. I spent much time in prayer over this revelation, wondering if I should just cancel Christmas altogether.. no tree, no cookies, no gifts.. etc. I really did. The last thing I want to do is anything against my Savior, anything that displeases Him, and can potentially do myself spiritual harm. Or potentially turn off non-believers from God altogether. What a tragedy that would be!

This is the conclusion I came to for my family. We will celebrate Christmas. I will even put up a tree and make cookies and buy gifts, but I will make sure that everyone in my house knows WHO we are celebrating and why.  The focus will be on Jesus and His birth and sacrifice for us. I'm kicking out Santa Clause and everything to do with him. The gifts will be from family members to express our love for each other and Christ's love for us. What it boils down to for me is an attitude of the heart and where my heart is focused during Christmas. Jesus!

However, I'm in no way saying that this is the right thing for anyone else to do. I encourage each of you to get alone with God and ask Him to reveal to you His will for you and your family for Christmas.