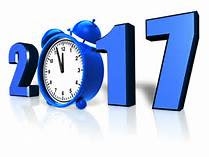 I can hardly believe it's 2017!  For people as old as I am, it sounds so Sci-Fi, doesn't it? Yet here we are. I'm not one for making New Years Resolutions. Yes, I do need to lose weight, and I could stand to exercise more and read my Bible more and be nicer to my husband and not worry so much.  But resolutions don't typically work for me. I learned awhile ago that if I really want to change for the better, I need to go to the One who created me, and just spend time in His presence.  But enough about that.

I think 2017 is going to be a really interesting year. I follow a prophet, John Fenn, who I believe is a true prophet, and he says "2017 is going to be a hard year for the world." I believe that too. I believe there are forces behind the scenes in America who will work to destroy us from within in any way they can. Whether you like Trump or not, these people are upset that a nationalist and a conservative will be in the White House. John Fenn saw much civil unrest and rioting. We are certainly a nation divided. Eventually, this civil unrest will focus not only on conservatives, but on Christians as well.  Of course we know this is coming because Jesus told us we would be persecuted. Remarkably, he didn't exclude Americans.

If the world hates you, you know that it has hated Me before it hated you. John 15:18

If they persecuted me, they will persecute you also. John 15:20

I also believe America is in deep trouble with God at the moment. Our illustrious president just stuck a knife in the back of Israel and then twisted it. If you don't know what he did, click here.  In a nutshell, his abstaining from voting at the UN, has divided the land of Israel yet again and given over to the Palestinians, among other things, the holy site of the wailing wall. And I hear he's not done yet, and he will reveal more of his insidious plans at a meeting to be held in Paris this January 15th to discuss the two-state solution.

The Lord had said to Abram, “Go from your country, your people and your father’s household to the land I will show you.
“I will make you into a great nation,
and I will bless you;
I will make your name great,
and you will be a blessing.
I will bless those who bless you,
and whoever curses you I will curse;and all peoples on earth
will be blessed through you.”  Genesis 12:1-3

Judgement is coming on America for this, believe me.

Of course, based on prophecy,  I believe we are going to see many more natural disasters too. Earthquakes, storms, meteors, droughts, etc..

I found this really interesting. This is from the USGS. Here's the number of earthquakes worldwide in various years, leading up to the present. I was completely shocked!

I am NO prophet. But I have eyes and ears and God's Spirit living inside of me. I based these predictions on the Word of God, what I've heard from valid prophets, and what I perceive around me

Well, thanks MaryLu, you are probably saying. I feel so much better now!  Honestly I'm not trying to scare anyone... just using the truth of Scripture to warn you to be on the alert. Don't be surprised at any of these things. Be prepared. Be in prayer, but don't be afraid. Our God is on the throne!

But there is much GOOD coming too! 2017 promises to be a very prophetic year.


It is my personal belief that while the darkness is growing, the light will also blossom. I believe in the coming years, we will see an outpouring of the Holy Spirit like we've never seen before.

If you know your Bible, you know that God loves to use numbers to signify hidden meanings or special events.

You may wonder why should we care about numbers that relate to Israel. Well, for one thing the Jews are God's chosen people, people He made a covenant with thousands of years ago. God loves the Jews and has not forgotten His promises toward them, and since God cannot break a promise, we know that everyone of them WILL be fulfilled. Yes, most of the Jews rejected Jesus as their Messiah, and that's why God turned to the Gentiles and chose children from among us. But when the last gentile He has chosen comes into the Kingdom, God will turn His full attention back onto the Jews. That is why these particular numbers are really interesting and worth looking at.

And don't forget that the GREAT WONDER in the sky of Revelation 12 will appear this coming September. If you don't know what I'm talking about, Click on my article HERE. It is my personal belief that at the end of this year, we true believers may find ourselves gathered out of this world and brought to heaven where we will take part in the great wedding of the lamb. If that doesn't get you excited, nothing will.