What was it really like at the Women's protest in D.C.? 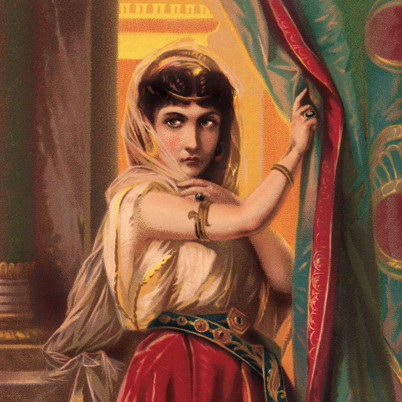 Hi Saints of the Most High!

Today, I want to share something with you that my sister-in-law wrote. My brother, his wife, 3 kids, and another family went to D.C. to see the inauguration. The day afterward, they wanted to walk from their hotel to the new Trump Hotel to take a picture out in front. You may or may not know that on that day, there were tons of women in the street protesting..... ?  Actually I'm not sure what they were protesting, except Trump. Anyway, here's an Instagram I received from my sister in law. 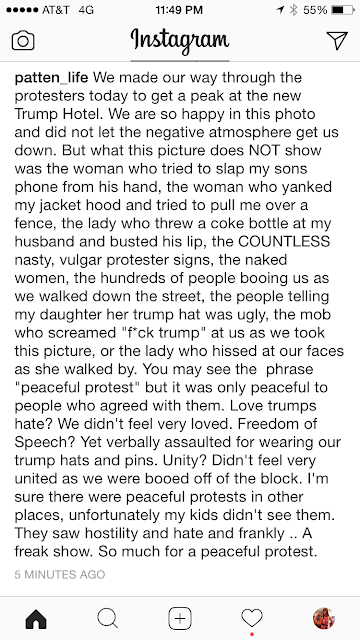 Here's the picture of them when they finally made it to the Trump hotel.  Though most of them tried to smile and appear like they were having a good time, you can see the smallest girl staring off to the left. I'm told she's looking at the protesters who are shouting obscenities at them. 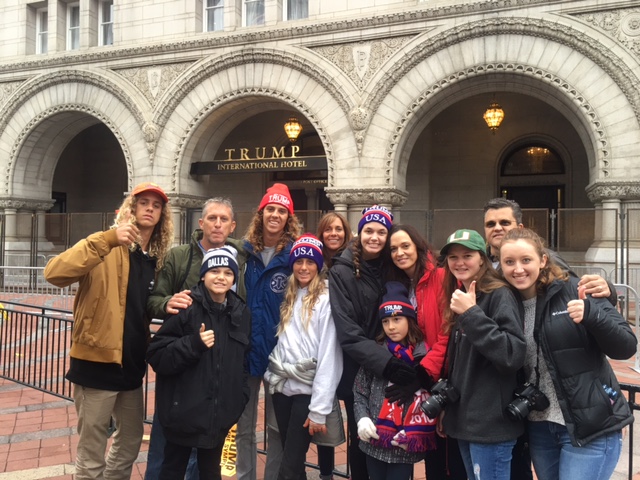 This is something my nephew, Wade, age 16, wrote when they finally returned home from their trip

The inauguration was the best and worst time of my life. It showed how many Americans care about America and want it to change. Also, it showed how stupid and blind people are to what Trump has to offer. And for people to say it was a peaceful protest?  It was anything but that. My dad was having a debate with a black lives matter person and all he said was all lives matter and they flipped out on him. They even threw a bottle at him and cut his lip open.  The other lady yanked my mom down by her jacket for no reason. My family and our friends wanted to take a picture in front of the Trump Hotel and as we were, there were hundreds of people cursing us out saying f*** trump and cursing out our friend's 10 years old daughter for wearing a Trump hat. So what I got out of this trip is that if you act like that you don't have the right to be called an American. You should be called an animal because that is damn sure how they were acting. Thank you Trump for a great speech and for making America great again even for all these stupid people in this country.

Though I didn't watch much of the protests, I did see a few interviews with the women. Now, mind you, I"m a woman, so I'm obviously for women's rights. Though, I'm not a feminist, I believe women should have all the rights of men. However, I also believe women are different from men and God created us for different roles and purposes. I enjoy being a woman!

But none of the women I heard had a valid reason for their vile, crude, profane protest. Some said, they are fighting for equal rights (But they already have them) Others said they are fighting not to lose their rights (Yet, wouldn't you think they'd wait until that threat was real?)  Others just said they hate Trump and think he's a fascist.  My husband had the misfortune of reading Ashley Jud's speech at the rally online, and he told me it was the most evil, crude, perverted thing he'd ever read. And believe me, my husband has been around the block.  Needless to say, I won't be watching any more of her movies.

How do these women explain to their young children why they were dressed up like vaginas?  Sorry to be crude, but it's beyond decency and should cause shame. That's what has me so baffled. They have no shame, which means their conscience has been deadened. Either that or the enemy has them trapped within a cruel deception.

I was asking the Lord about these things the other day and I sensed Him telling me that this is the Spirit of Jezebel. Some of you may remember Jezebel from the Bible. She was the wife of King Ahab who was King over Israel. You can find her story in 1 Kings. Here's a little information about this vile woman.

Under her rule, most of Israel abandoned their worship of the true God and committed horrific acts in their worship of Baal. Jezebel was a feminist and a murderer who slaughtered those who opposed her and her ideas. Even the great prophet Elijah ran in terror from her at one point.

See any similarities between Jezebel and the spirit who controls some of these women today? Violent woman who hate God and murder their own babies, who put no limits on their sexual activities?  That's why I believe a demon is behind this movement... the same demon who filled Jezebel.

What can we do? Now that we know what it is, we can pray against this vile spirit. Pray and fast. Speak the Word of God against her and use the name of Jesus.  We must band together to defeat her. And always remember we are God's warriors and we are on the winning side!