Who is really going to make America great again? 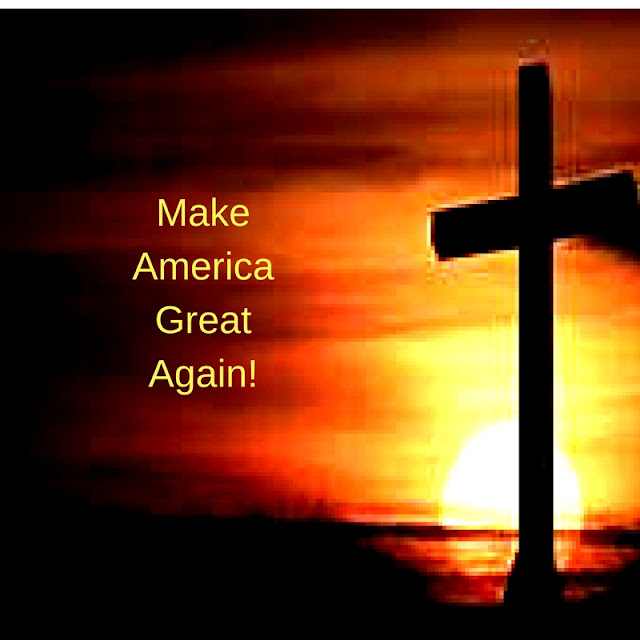 Yes, I voted for Trump.  If you want to see why, you can click HERE. But lately I find myself concerned about what I see happening on two fronts.

ONE: Christians who are SO EXCITED that Trump won, so exuberant and happy, and who seem to believe that once Trump takes office, everything is going to be wonderful.  While I agree that if Trump actually does the things he promised, this country will slowly begin to rise from the ashes of progressive liberalism that has, for the past several years, torched our economy, our healthcare, our education, our law enforcement, our safety, our constitution and our freedom, but what concerns me about some of the euphoria I see is that it borders on idol worship. Here is a man who is going to make things great again. Here is America's savior! When in reality, America only has one Savior, and that is Jesus.  No man or woman is capable of saving a country whose culture is full of filth, immorality, and violence, a country that produces the most pornography in the world, who has murdered over 60 million babies, whose child sex-trafficking is on the rise, who has taken God out of every public arena and punished those who stand up for Him. A country who proudly displays a nine year old boy on the cover of National Geographic who wants to become a girl, who lifts up the gay, transgender, queer, bi-sexual, asexual etc..(I'm sure I've missed some) lifestyle as perfectly normal (Acts which God calls an abomination) And most of all, a country where Christianity is declining and whose churches are mostly dead or lukewarm.

TWO: These are the people who think Trump is the anti-christ, who are storming the streets, the courthouses, doing everything in their power to get him impeached before he even takes office. These are the people who not only drank the propaganda koolaid but who swallowed it and digested it whole. They are so convinced that Trump is the reincarnated Hitler, that they are actually trembling in fear. Ridiculous.

Here's my point. Until Jesus returns, it is the job of His disciples, His church, to battle the forces of darkness, spread the Gospel, heal the sick, cast out demons, and be His ambassadors on earth.

Yet, I haven't seen that happening here in America at all. Have you? Maybe sparks of it here and there in good churches who preach the truth. But overall, if we had been doing our job, do you really think America would be in the shape it's in right now?

It's the church in America that has failed in our duties. Yet so many of us now think that Trump is God's man, that Trump is going to make things right again, that Trump's election has given us a reprieve from coming judgement, given us time to rise up and finally take back territory the enemy has stolen from us.

But will we? If we are all looking at Trump to save us?  But more importantly, when has the Church ever grown, ever stormed the gates of hell for God during times of ease, prosperity, and comfort?
NEVER.

Throughout history, the church has only grown and done it's mightiest work during times of persecution.

So, here's my question. If the Church and not a man is the only thing that will make America great, how is that going to happen unless we finally get serious, unless we finally get red-hot for Jesus, forsake ourselves, take up our crosses, and do the work He has asked us to do? And how is that going to happen while we sit on our couches with our bellies full, our wallets stuffed, in the safety of our homes?

It won't.  That's why I'm telling you that America will not become great again until the true Church of Jesus undergoes persecution.  Intense personal persecution, and intense violent public persecution. Only then will true believers rise from the ashes and, filled with the Holy Spirit, bring in a harvest of souls like never before.