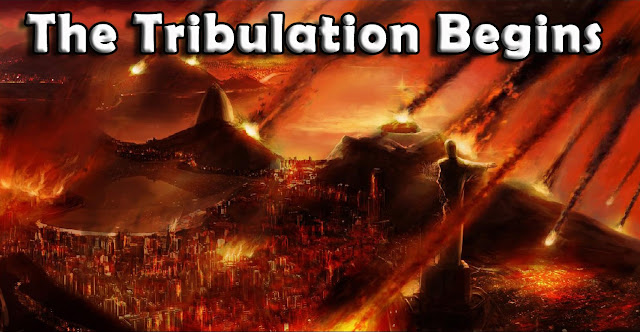 Before I begin, let me define what the Tribulation is.  The short answer? It's a 7 year period of time that happens right before the 2nd coming of Jesus and the end of the age. It is a time of great suffering and agony on the earth in the form of many natural disasters, wars, incoming asteroids and meteors, famines, disease, nd a global dictatorship ruled by the antichrist.  This time period goes by many names in the Bible, including but not limited to:

The length of this time period (7 years) is found in Daniel 9. To explain it in detail would take another post, so I'll leave it to you to do your own homework. Daniel is a fascinating book. Also in that chapter the angel tells Daniel the exact date that the Messiah (Jesus) would ride into Jerusalem on a donkey on Palm Sunday. If that doesn't convince people that the Bible is God's Word, I don't know what will!

When the Jewish people rejected their Savior, God's time clock stopped and the final week (or 7 year period) has yet to be fulfilled. We then entered, and are now still in, the Age of Grace in which God is offering salvation to all of mankind, not just the Jews. In the final 7 year period, God will once again turn His attention to the Jewish people...the apple of His eye. No, the church has NOT replaced the Jews. God still loves the Jews and He will reveal Himself to them in the last days. Jesus refers to this age of grace as the Times of the Gentiles in Luke 21:24.

Much of the Tribulation is described in the book of Revelation, and believe me, you really do NOT want to be here on earth. Millions of people will suffer and die from God's wrath being poured out upon the earth, In addition, millions of Christians and Jews will suffer and die under the hand of the Antichrist.The last half of the Tribulation is called the Great Tribulation and is going to be much worse than the first half and is kicked off by the Antichrist setting himself up as god in the Jewish temple in Jerusalem.

For then shall be great tribulation, such as was not since the beginning of the world to this time, no, nor ever shall be. And except those days should be shortened, there should no flesh be saved: but for the elect's sake those days shall be shortened. Matthew 24:21-22

Now, for the Rapture. Last week I posted my thoughts on why I believe we will know the timing of the Rapture. For those of you who don't know what the Rapture is, it is an event in which Jesus calls up His saints home to heaven.  The word "Rapture" is not found in the Bible, but the event is described in great detail by both Paul and Jesus. Read 1 Thessalonians 4-5, 1 Corinthians 15, and Matthew 24.

There are several theories as to the timing of the Rapture  as it relates to the Tribulation, which I'll list briefly here.


First of all, to understand the timing, we need to know what is the purpose of the Rapture?

1. To rescue the Faithful saints from the horrors of the Tribulation and from God's Wrath.
For God hath not appointed us to wrath, but to obtain salvation by our Lord Jesus Christ, 1 Thess 5:9
And to wait for his Son from heaven, whom he raised from the dead, even Jesus, which delivered us from the wrath to come. 1 Thess 1:10

2. For Jesus to fetch His bride and bring her up to the Wedding of the Lamb (Jesus marries the church)
“For I am jealous over you with godly jealousy: for I have espoused (betrothed) you to one husband that I may present you as a chaste virgin to Christ.” (2 Corinthians 11:2)
Let us rejoice and be glad and give him glory! For the wedding of the Lamb has come, and his bride has made herself ready. Revelation 19:7

3. To close out the church age so God can then focus His attention on the Jewish people
And at that time shall Michael stand up, the great prince which standeth for the children of thy people: and there shall be a time of trouble, such as never was since there was a nation even to that same time: and at that time thy people shall be delivered, every one that shall be found written in the book. Daniel 12:1  (Michael is the Archangel who watches over Israel)

Most everything in the Bible that has to do with the Tribulation period, has to do with Israel: The Antichrist, the two witnesses, the 144,000 evangelists. Plus, there is no mention of the church after Revelation 3.

As I mentioned last week, often when I bring up the topic of the Rapture to many Christians, their response is one of complete apathy. They've been taught that we won't know when it will happen, which I proved false in my POST HERE. Because untruth has wormed its way into the church, many Christians refuse to also discuss the timing of the Rapture because it causes arguments and it doesn't really matter anyway.  But once again, I think it matters a great deal that we will know the timing AND that we know whether we will be rescued before, in the middle, or after the Tribulation.

Let me start off by saying that I used to believe in a Post-Tribulation timing. From my reading of the Scriptures, in particular Matthew 24, it definitely seemed that we would be here for the Tribulation and right up to the end when Jesus returns and calls us up to meet Him in the air.  I believed this for years, but I now admit I was wrong. After years of studying prophecy, I now believe that the saints will be snatched out of here before the Tribulation.

My reasons are all based on the three purposes I listed above.

1. We are the Bride of Christ. This is mentioned multiple times in the Bible. In essence, we are betrothed to Him. Jesus paid for us with His blood, and the Holy Spirit has put His seal upon us.  Do you really think Jesus is going to leave His bride here on earth to suffer the wrath of God? I'm talking about real wrath being poured out, fire, blood, boils, smoke, rivers and seas turning to blood, millions suffering and dying, etc..  read Revelation. There are a multitude of Scriptures which tell us that we will be saved from God's wrath.

2. The Jewish Wedding. This is the thing that finally convinced me. It might behoove you to do a study on ancient Jewish wedding traditions. (Here's an excellent site)  I'm only going to summarize them here.

The groom paid a bride price and then told the bride that he was going away to prepare a place for her in his Father's house. (Remind you of something Jesus said?).  The groom could be gone for up to 2 years building a bridal chamber onto his father's house.

When the room was ready, the groom would come and get his bride. The bride wouldn't know the exact timing, but she had to be ready at all times. She had spent her time doing good works and learning how to be a good wife. Then a trumpet would sound, announcing the groom's arrival, and he would take the bride back to the bridal chamber for 7 days.  After the 7 days, the couple would come out to celebrate with a huge feast and party.

Once I learned this, I realized that the bride of Christ must be in heaven for the entire Wedding ceremony, which lasted 7 days... .which had to be equivalent to the 7 year Tribulation on earth.

3. The purpose of Daniel's 70th week (or the final 7 years at the end of the age) is for God to deal with Israel. His entire focus will be on the Jews and no longer on the church. Therefore, the church must be gone. I'm not saying God can't focus on both... but the purpose of this last 7 year period is deal with the Jews and save the remnant.

So why is this important?  It has to do with being prepared. If you believe in a pre-trib rapture, you'll be paying attention to all the signs around you. You'll be watching and getting yourself ready, purifying yourself, living a godly life, telling others about the Lord. If you believe in a post-trib, then you will be looking for the Tribulation to start (not for Jesus), and you'll probably be stocking up food and emergency supplies. (I know I would) .

However, no matter what you believe, please don't allow it to cause rifts between you and your brothers and sisters.  I've heard of Christians who become furious about these things and go so far as to break off friendships. Please don't do that. It's not crucial. Being saved and having a relationship with Jesus is the most important thing.  As the bride of Jesus, we should be focusing on pleasing Him and watching for His soon return.