Are we sliding into Sodom and Gomorrah? 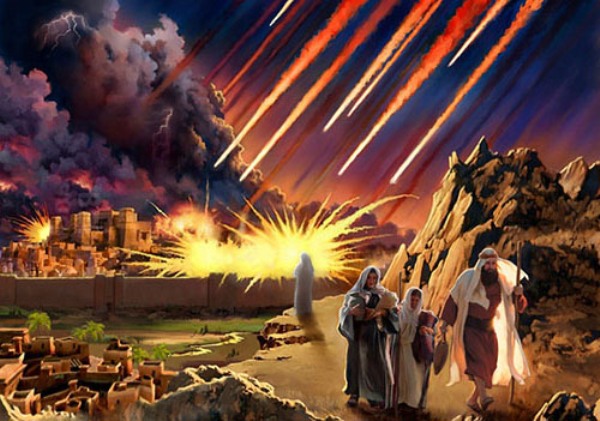 But the men of Sodom were exceedingly wicked and sinful against the Lord. Genesis 13:13
And the Lord said, “Because the outcry against Sodom and Gomorrah is great, and because their sin is very grave, Genesis 18:20

The sins of Sodom and Gomorrah were so horrible and reprehensible that God chose to destroy both cities with fire and brimstone from above. This was the only recorded time God did this to a specific city that I can recall. Maybe you've wondered what "sins" of Sodom and Gomorrah were so abominable that God singled them out to be utterly destroyed. The only two blatant sins that are mentioned in the text are homosexuality and violence, but I often wonder if those were the only ones.

Recently I read Romans 1 and was stunned by the list of qualities Paul lists that are found in people who reject God and engage in all sorts of sexual immorality.

And even as they did not like to retain God in their knowledge, God gave them over to a debased mind, to do those things which are not fitting; being filled with all unrighteousness, sexual immorality, wickedness, covetousness, maliciousness; full of envy, murder, strife, deceit, evil-mindedness; they are whisperers,  backbiters, haters of God, violent, proud, boasters, inventors of evil things, disobedient to parents, undiscerning, untrustworthy, unloving, unforgiving,unmerciful;  Romans 1:28-31

That's quite a list, isn't it? Just above these verses, Paul describes a specific downward spiral from knowing God to finally ending up being a person with these qualities. Yes, these people start out knowing God!

because, although they knew God, they did not glorify Him as God, nor were thankful, but became futile in their thoughts, and their foolish hearts were darkened.  Romans 1:21

Here's the downward spiral
They know God
They did not glorify God
They were not thankful to God
Their thoughts became futile
Their hearts became dark
They professed to be wise, but became fools
They worshiped created things rather than the creator (money, sex, power, beauty)
God gave them up
They dishonored their bodies with homosexuality
They ended up having all those qualities listed above.

These qualities reminded me of the ones listed in 2 Timothy 3:1-4

But know this, that in the last days perilous times will come:  For men will be lovers of themselves, lovers of money, boasters, proud, blasphemers, disobedient to parents, unthankful, unholy,  unloving, unforgiving, slanderers, without self-control, brutal, despisers of good,  traitors, headstrong, haughty, lovers of pleasure rather than lovers of God,  having a form of godliness but denying its power.

Two things stand out to me about these Scriptures
1. These people once knew God or at least professed to know Him or had a form of godliness
2. How much of these qualities are found in our current culture, particularly in the generation now coming to adulthood. (Which is yet further proof we are in the last days)

Yet there is one more verse in Romans 1 that screams for our attention, the last verse of the chapter

Apparently, even if you don't practice such wickedness but stand by and approve it, you are EQUALLY guilty!  This immediately made me think of the many Christians and many churches I've heard of who accept homosexuality, not only in their congregations, but in their leadership.   It also reminded me that we, as followers of Jesus, cannot stand by and keep our mouths shut. If we do, aren't we guilty of seemingly approving of such practices?

The take away from all this?

1. The first steps toward evil are simple ones. Not glorifying God and not being thankful to Him. Be careful not to take those first steps down!

2. Stand up for righteousness. Open your mouth and be counted among God's people. When you see evil, call it out. Yes, you will be hated, maligned, ostracized and maybe even persecuted.  Jesus told us to expect this. The alternative? Being silent, being safe, and in the end being counted among the unrighteous.