This 2017 eclipse will turn day to night for TWO minutes and will be the most observed, filmed, and studied eclipse in American History.
Big deal you might say. But wait, there's more. There will be ANOTHER TOTAL Eclipse that crosses the United States just SEVEN years later, in effect marking the US with a Giant X. 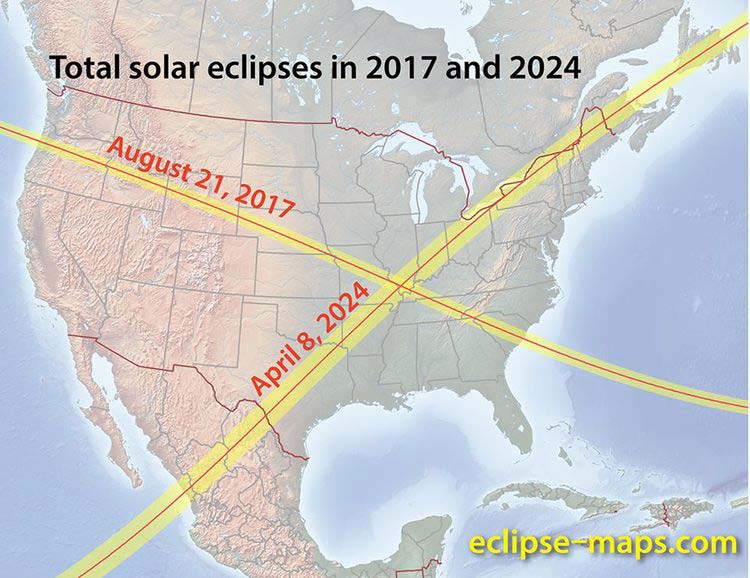 Hmm. Seven. Where have I heard that number before? Wait! I know. That's one of God's favorite numbers.
The number 7 is used 735 times in the Bible (54 times in the book of Revelation). If we include how many times 'sevenfold' (6) and 'seventh' (119) is used, our total jumps to 860 references.

Seven is the number of completeness and perfection (both physical and spiritual). According to Jewish tradition, the creation of Adam occurred on October 7th, 3761 B.C. (or the first day of Tishri, which is the seventh month on the Hebrew calendar). There are 7 days in a week and God's Sabbath is on the 7th day.

The Bible was originally divided into 7 major divisions. They are 1) the Law; 2) the Prophets; 3) the Writings, or Psalms; 4) the Gospels and Acts; 5) the General Epistles; 6) the Epistles of Paul; and 7) the book of Revelation. The total number of originally inspired books was forty-nine, or 7 x 7, demonstrating the absolute perfection of the Word of God.

And The Tribulation  or Daniel's 70th week lasts 7 years.

“And I will show wonders in the heavens and in the earth:
Blood and fire and pillars of smoke.
The sun shall be turned into darkness,
And the moon into blood,
Before the coming of the great and awesome day of the Lord.
And it shall come to pass
That whoever calls on the name of the Lord
Shall be saved.
Joel 2:28-32

What should we make of this?  I leave you to decide

But whatever you do, stay strong in Him.