The Dragon in Revelation 12 and Planet X 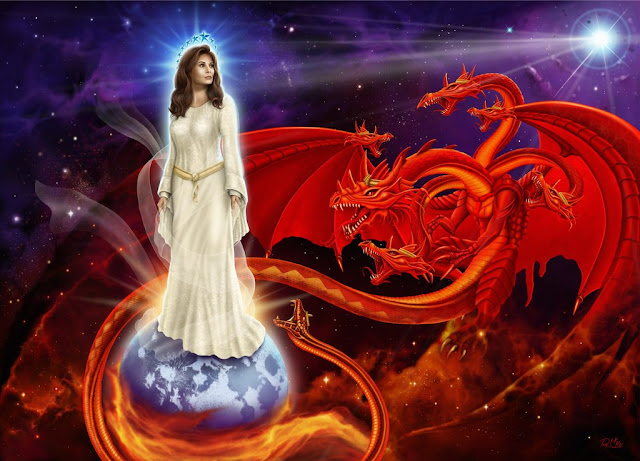 Now a great sign appeared in heaven: a woman clothed with the sun, with the moon under her feet, and on her head a garland of twelve stars. Then being with child, she cried out in labor and in pain to give birth.
And another sign appeared in heaven: behold, a great, fiery red dragon having seven heads and ten horns, and seven diadems on his heads. His tail drew a third of the stars of heaven and threw them to the earth. And the dragon stood before the woman who was ready to give birth, to devour her Child as soon as it was born
Revelation 12:1-4

If you follow my blog, you know I'm really interested in this Revelation 12 sign. If you don't know what I mean, click on the Rapture Sign of 2017 at the top of this page.  I've been talking about this sign for quite some time because it is occurring exactly as described in the Scriptures this year (2017) in September and it hasn't occurred for over 7000 years.  Also, it's a rapture verse due to its use of the word rapture or harpazo.  Anyway, I encourage you to read it if you haven't already.

What I didn't discuss in that article was the identity of the dragon mentioned in the verses. Since the Bible interprets the Bible, let's look for other verses that mention 7 heads and 10 horns. (Though I bet you can guess who this is)

Then I stood on the sand of the sea. And I saw a beast rising up out of the sea, having seven heads and ten horns, and on his horns ten crowns, and on his heads a blasphemous name  Rev 13:1

After this I kept looking in the night visions, and behold, a fourth beast, dreadful and terrifying and extremely strong; and it had large iron teeth. It devoured and crushed and trampled down the remainder with its feet; and it was different from all the beasts that were before it, and it had ten horns. Daniel 7:7

Gabriel reveals to Daniel who this fourth beast is
The fourth beast shall be
A fourth kingdom on earth,
Which shall be different from all other kingdoms,
And shall devour the whole earth,
Trample it and break it in pieces.
The ten horns are ten kings
Who shall arise from this kingdom.
And another shall rise after them;
He shall be different from the first ones,
And shall subdue three kings.
He shall speak pompous words against the Most High,
Shall persecute the saints of the Most High,

In Revelation 17, the angel talking with the Apostle John gives us a great deal of information about this beast with 10 horns. I encourage you to read it for yourself, though I'll summarize here.


There's a lot more information in both of these chapters you can read for yourself, but for the purposes of this post, I believe I've proven that the dragon with the 10 horns and 7 heads is the Satanic final kingdom of the Antichrist.

So, why would Satan wish to devour the woman's child? Many have interpreted this to mean that Satan, through King Harod, tried to kill Jesus when He was just a babe in Bethlehem. If so, this begs the question, why then does it say in the very next verse that Jesus was raptured up to heaven immediately.
She bore a male Child who was to rule all nations with a rod of iron. And her Child was caught up to God and His throne.  (caught = same greek word harpazo that the Apostle Paul uses in 1 Thess 4:17)

Jesus was never raptured, and he certainly wasn't transported to heaven right after His birth.
It would make more sense to interpret this passage as being the church finally born (every person God calls to salvation has come into the Body of Christ) and Satan (and his Antichrist system) desperate to destroy this "new creation", this new race of perfect beings who will be both kings and priests. But no sooner are they (we) born, then we are raptured up to heaven out of his grasps!.

What's even more interesting is that right after this happens, it says war breaks out in heaven between Michael (the great archangel over Israel) and his angels and the dragon and his angels... and Satan loses. Since Revelation is a book of future prophecy, I believe this war in heaven is in the future and will happen shortly after the rapture.

So the great dragon was cast out, that serpent of old, called the Devil and Satan, who deceives the whole world; he was cast to the earth, and his angels were cast out with him.

So now, Satan is stuck on the earth and without the church, he is finally able to create his final empire and put the Antichrist in charge.

So, I began to wonder... if the Sign of Revelation 12 will be physically displayed in the stars, what about the dragon? Is there some star alignment or planetary presence that represents the dragon?

Turns out there is. Rather than blab on and on, I'm going to embed this video for you to watch. It's only 16 minutes. Please watch and give me your thoughts.


There are many other people talking about this on the internet. I encourage you to do your own homework. Is this the dragon or is it something else? Who knows? I just find it very very interesting.


There's also another theory that involves the constellation Hydra (which is the 7-headed serpent)
Here's a great video which shows that. The entire video is good but if you want to skip to the Hydra part, it starts at 29:00.

Then God said, “Let there be lights in the expanse of the heavens to separate the day from the night, and let them be for signs and for seasons and for days and years;  Genesis 1:14

The heavens declare the glory of God;
And the firmament shows His handiwork.
Day unto day utters speech,
And night unto night reveals knowledge.
There is no speech nor language
Where their voice is not heard
Psalm 19:1-3