I thought you might like to know what I'm working on these days, what I have releasing next, and what I'll be working on for 2018. 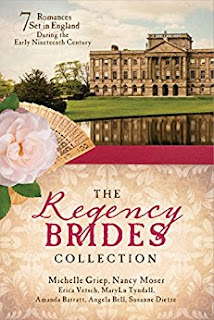 My new story, The Highwayman's Bargain, is included in this collection! And check out the other authors listed, some of my favs!  Michele Griep, Nancy Moser, Erica Vetsch, Amanda Barratt, and Angela Bell!

The Highwayman's Bargain is a fun story about a young farmer's daughter who is kidnapped by a highwayman on her way to her wedding to a second son of a baron....a match that will enable her to support her aging father and ailing mother.  The highwayman strikes a bargain with the young lady. If after three days, he hasn't convinced her that the man she intends to marry is a cad of the worst kind, he will set her free to do as she pleases. If he does convince her, she must call off the wedding immediately and marry him.

This collection releases November 1st, but you can preorder it now


Yes, I have a publishing contract! I was contacted by my publisher regarding a series of novels they are producing called "Daughters of the Mayflower". Each book in the series is a separate story written by a separate author and set during a distinct time period in American history. The first one starts on the Mayflower, the ship that brought the first pilgrims to America. I can't tell you the names of all of the other books, authors, or the time periods yet, nor can I release the cover of my book. I also don't know when my book will be released, but my guess is sometime in late 2018.

The novel is due to my publisher in February 2018, and I'm working on it now. As I know more about the series, I will let you know.  I actually wanted to do The Pirate Bride, but I would have had to stop writing When Angels Cry to work on it, and I didn't feel I could.

The first book, The Mayflower Bride will release in Feb, 2018 and is available for preorder now!


After I turn in The Liberty Bride, I'm planning (Lord willing) to write either of the two following books.
She Walks in Love - Protectors of the Spear, Book 2  OR
The Reckless - Book 6 in the Legacy of the King's Pirates

If you want to see the cover of She Walks in Love, click on my "Coming Soon" above.

If you have a preference on which book you'd like me to write, I'm open to being swayed!

(NOTE: Of course, this all depends if we are still here in 2018, As most of you know, I tend to believe the Rapture is quite close. However, I'm still making plans, as you can see, and leaving the timing up to the Lord)