Can a Christian be a Trump Supporter? 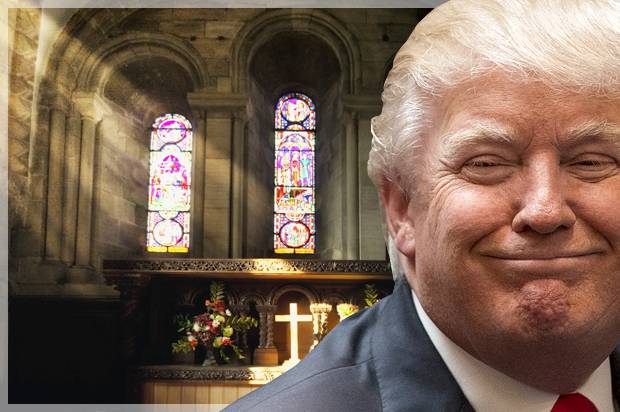 I am a Christian. I believe the Bible is the living Word of God. I believe Jesus is the Son of God who came to earth, lived a sinless life, died for the sins of all mankind, rose again, and is now sitting at the right hand of His Father. All those who rely on Him and believe in Him and follow Him will spend eternity with God. Loving God with all my heart and loving my fellow man as myself are my chief aims in life. I am not a racist, a zenophobe, a homophobe, transphobe, islamaphobe or any other "phobe".  I have friends of all races and my granddaughters are half Mexican.

Then why am I being persecuted by my fellow Christians for being a Trump supporter. I lost a dear Christian friend over this election who told me that I couldn't be a Christian and support Trump. She was actually worried about my salvation. I recently met other Christians online who said the very same thing. Questioning my faith and my salvation simply because of my political preference. I've never seen anything like it!

Their reasons are always the same. Trump is a racist, a nazi, a pervert, and a woman hater. He's a white supremacists who wants to take away the rights of every minority in the country, including the LBGTQ community, all while he's splitting up Mexican families and throwing parents out of the country without their children. He's the antichrist himself who is going to start World War III and destroy our nation. Oh, and by the way, he surrounds himself with rich white racists too.

Really? Wow. Whenever I hear all those things I truly wonder what news these people are listening to. Honestly, I think that's the key. If Trump really was all those things and was doing all those things, then absolutely, as a Christian, I could never support him. But the truth is, I don't believe he is any of those things. I really don't. (Maybe a pervert in his younger years... I'll grant you that one. But then again, we've had lots of perverts in the White House, haven't we?. Kennedy and Clinton come to mind).  So then, if much of the country believes all this horrible stuff about Trump and the other half doesn't, where's the disconnect?

Did you ever wonder why so many Germans allied themselves with Hitler?  Surely if they knew what a horrible monster he was, the majority of the population would have risen up and gotten rid of him!  Then why did his nation adore him? I have one word: Propaganda. Hitler and his people owned the media of the time and began feeding the minds and hearts of the people with lies...very convincing lies.  People believed the newspapers and journalists because they had no reason not to.  Now, before you tell me that this is exactly what Trump is doing, then why is the media against him?  You have to stop and ask yourself that question. Why is the majority of the media against Trump?

We live in a digital age and much of what we see and hear can be manipulated. They can alter pictures, play clips of videos that make it seem like something it isn't, give you half-truths or full out lies. They can even film an event in a movie studio and make you believe it really happened. And people believe them because, hey, they're journalists! They are supposed to be reporting the news. But the age of the unbiased journalist is gone. And with it, our republic. A democracy that is run by the people cannot survive unless the people are properly informed. The people must have the truth, or how can they vote correctly? They can't.

This is so much more than democrats vs. republicans. There are forces at work in the USA and the world that most people have no clue about. I have only just begun to skim the surface of what is truly going on. There are very powerful and very wealthy groups of people behind the scenes who are the ones running the show. They want a one world government with them in charge. But first they have to destroy any form of democracy and create such chaos and violence within countries that people beg them to bring back order and peace. They will even go so far as to start a world war to achieve their goal. Several of our presidents in the USA have been merely puppets for these people (democrat and republican), and they thought they had another puppet in place when the horror of all horrors happened: Trump won. He's a nationalist and a believer in this country and the constitution. And they hate him for it. Now, they have to him get out of office at all costs. At the very least, they will put roadblocks in place so he can't achieve any of his goals to make America great again.

The mainstream media is in their pocket and they are using it to lie to the American people, to convince them that Trump is the worst sort of person imaginable and that he will destroy our country.

Case in point: The recent Charlottesville riots.
Here's basically what most of the news media reported: The KKK and Neo-Nazis were protesting the removal of a statue of a confederate war hero and when other people came to protest their rally, all hell broke loose. Fighting ensued, including knives and blow torches and in the end someone drove a car into the crowd, killing one person and injuring several.

And when Trump came out with his initial statement saying that there were bad people on both sides, he was instantly called a racist and a white supremacist.  Later, he came out and said that of course all forms of racism, the KKK, and Neo-Nazis are reprehensible, but he stuck to his original story that both sides were culpable in the riot.

My son is a Major in the VA National Guard and was there. There were an equal number of well funded leftists there (planned ahead of time) whose intent was to fight and make those who were there merely to preserve our history appear to be aligned with the Nazi and KKK element. Sad that America is continually being deceived by the mainstream media. They put their ideology ahead of what is good for our country.

I live here in Va. and you might be surprised at what has already come out about the violence in Charlottesville. Some in the Charlottesville police have come forward and said they were ordered to lead the two groups together and to "stand down" and not intervene in any way unless told to by the democratic mayor. They said they couldn't even stop the car that drove into the crowds because of this order. The whole thing was planned, last I heard, 5 of the 6 arrested weren't even Va. citizens

MaryLu again: Yes, there were probably KKK and White supremacists there. Yes, they are horrible people. But I don't believe they made up the bulk of the original rally. The people who were shipped in on purpose to disrupt things may or may not have had good intentions, but we know at least some of them came there intending violence. (I personally believe they were paid)

Why would anyone want to cause a riot and possible death? See my paragraph above about the forces behind the scenes. They want to cause chaos and division and hate.

So what can you do? Who can you trust?

If you see a clip of something happening or of a speech and then the anchor person puts a spin on it, seek out the entire clip somewhere else and watch it. Watch both conservative and liberal news stations and read both liberal and conservative newspapers and when something doesn't seem right and there are contradictions, seek out another source online. In fact, seek out multiple sources. Find a newspaper or news outlet that you trust and stick with it, but never read it exclusively.  The trouble with this is that it takes time and hard work and most people are lazy in this country. Many people don't even know our true history or even care. We're being distracted with entertainment, sex, alcohol and drugs. And if you don't think that was also planned, check out the history of Rome and why it fell. Keep the ignorant masses entertained, keep them fat, dumb and happy and they won't pay attention to you when you strip them of all their freedoms.

Back to my original point: None of us should ever question another person's salvation. Yes, we can examine their fruit and wonder sometimes. But whether a person is saved or not is a matter of the heart and between them and God.

Secondly, salvation in Jesus Christ has nothing to do with political affiliation or who one votes for. We are not saved by works, but by grace (and I would add, a love for Jesus and desire to follow Him). Even if Trump were a racist and all those other things they say he is, my voting for him has no effect on my eternal destination.

Before you accuse me of not being saved because of voting for him, perhaps you ought to get your facts straight about exactly who he is and what is really going on in this country.