More astounding information on the upcoming August 21st Eclipse over the US! 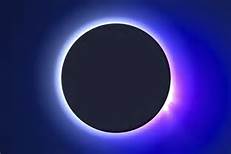 Back in June, I posted about an amazing event that is going to happen this month, in August, on the 21st. It's a total eclipse that crosses over the entire United States.  I'm going to copy a portion of that post below for those who don't remember or didn't see it. But I've recently come across some very very fascinating information to go along with it that may make this sign far more important than just another eclipse.

This eclipse is very rare because it tracks across the entire United States from west to east and it is a TOTAL eclipse, which means the sun will be completely blocked out

This 2017 eclipse will turn day to night for TWO minutes and will be the most observed, filmed, and studied eclipse in American History.

Big deal you might say. But wait, there's more. There will be ANOTHER TOTAL Eclipse that crosses the United States just SEVEN years later, in effect marking the US with a Giant X. 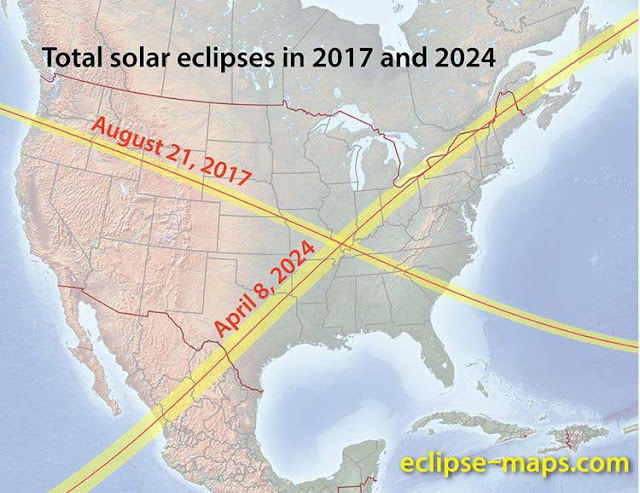 In my original post I commented on how important the number 7 is in the Bible.

An even more important Scripture comes from Joel 2
“And I will show wonders in the heavens and in the earth:
Blood and fire and pillars of smoke.
The sun shall be turned into darkness,
And the moon into blood,
Before the coming of the great and awesome day of the Lord.

1. Blood Moons
In the above Scripture from Joel, we see that before the Lord comes, the sun will become dark and the moon will turn to blood. If you're a prophecy buff, then you are well aware of the Blood-Moon Tetrad we just experienced in 2014-2015

Blood moons are not rare, but a tetrad (or 4 blood moons in a row) is very rare. A tetrad of them with a solar eclipse in the middle is highly rare. Back in 2014-2015, we had such an occurrence and many prophecy teachers believed something highly prophetic would happen during these years. Why? Mainly because these blood moons occurred on Jewish feast days.

Major events affecting the Jewish people have occurred in close proximity to all three of these tetrads. If you are interested in this topic, you'll find tons of information on this phenomena online. However, I'm only pointing it out here because of the prophecy in Joel where the moon turns to blood AND the sun to darkness before the great and terrible day of the Lord. So, we've had the amazing rare blood moons and we are about to witness the sun turning to darkness.  Just saying....

The August Eclipse is exactly 40 days from the Day of Atonement. If you're not familiar with Jewish feast days, you need to be. They are God's appointed days and highly important. Jesus fulfilled the first 4 of 7 when He was here on earth. The Day of Atonement is a day when the Jewish people come to the temple to atone for their sins each year. Forty days before that day, Teshuvah begins, which was a time in which the people were supposed to repent of their sins and get right with God before the Day of Atonement.
So, I got to wondering since the season of Teshuvah starts on the day of this eclipse, maybe God is trying to tell America to WAKE UP!  He's giving us one last time to repent of our sins and return to Him.

Yes, when Jesus referred to the sign of Jonah, of course he meant that He would be in the grave 3 days and 3 nights, talking about His death and resurrection. But what if he meant something else TOO?  I've discovered that Scripture is multi-layered, especially when it comes to prophecy.

Most of you know the story of Jonah in the Bible. God told him to go preach repentance to the people of Nineveh, but Jonah was afraid to go (Apparently from history, the Ninevites were pretty violent and nasty people).  Even though Jonah tried to get away on a ship, God had other plans and caused a storm to rise up and Jonah to get swallowed by a huge fish who just so happened to cough him up on the shores of Nineveh!

The Scriptures go on to say that Jonah preached to the people and the entire city repented and returned to God. Have you ever wondered why these vile people were so quick to repent, why it only took one rather smelly prophet to convince them of their sins and get them to turn back to God? Well,  a famous eclipse occurred right over Nineveh on June 14th, 763 BC. This is confirmed both by writings on cuneiform tables and NASA. At that time, and still today, eclipses were considered omens from God.

Also, according to historical records, two very bad plagues struck Nineveh in 765.  So, I'm thinking that the Ninevites felt that God was giving them many warnings already, even before Jonah walked on the scene. Which would certainly explain their quick leap to repentence.

So, is this incredible and rare eclipse over the US a warning from God to repent? Is this our last chance to repent and return to Him before Jesus returns?  There are certainly enough signs surrounding this eclipse to make one think.