Should we respect our flag and our national anthem? 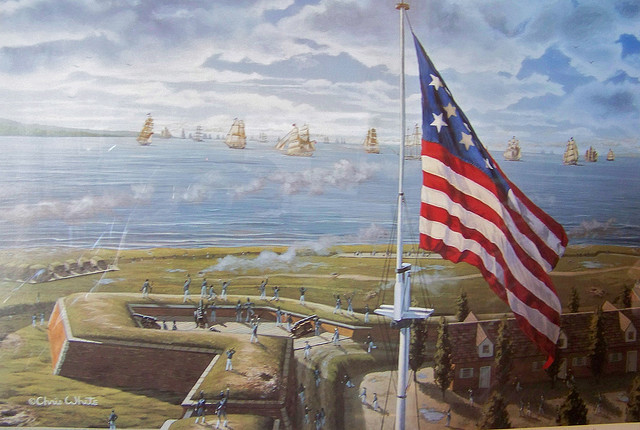 I'm currently writing another War of 1812 novel entitled Liberty Bride. Some of you may have read my prior War of 1812 series, Surrender to Destiny, published several years ago. Before writing that series, I knew very little about the War of 1812, but as I researched, I have to admit my patriotism grew by leaps and bounds. You see, America has its share of problems and by no means has been a perfect country, but we have always stood for freedom and liberty. Always. Yes, we had slaves in the beginning of this nation, which actually disturbed several of our founding fathers as they formed our Constitution. Most every nation that has ever existed has had slaves, some still do. I, in no way endorse such an abhorrent practice, nor am I making excuses for it, but people need to understand history and the cultural context of the time. It wasn't long after the founding of our nation that people began to rise up against slavery, and estimates of nearly 500,000 Union soldiers gave their lives to free the slaves.

What's great about this nation is its freedom. That's why millions of people want to come here each year. Anybody who wants to work hard can make a good life here. There is equal opportunity for all. No matter what your background, race, income level, or circumstances, if you're willing to work and learn and struggle, you can succeed. Some of us have to work harder than others to get there. But we can all make it. That's what I love about this country. This isn't true of most countries. Yet, some of us who have been privileged to live here all our lives seem to have forgotten that.  Yes, our nation still has problems. Our government is deeply corrupt, and some of you may not like our current president. But that's the beauty of our nation. Next election, you can vote him out! You can vote out all the corrupt politicians if you want! Our forefathers wanted this nation to be governed by its people. We have the final say.

Back in 1812, Great Britain thought they could reclaim their precious American colonies and subjugate them once again under British rule, taxing us whatever they pleased, telling us what religion we must follow, ordering us to obey the King.  At the time America was barely a babe among nations. We had a tiny army, and a mere handful of ships in our so-called Navy. We were still trying to figure out this free republic we had installed.  So, they started hassling our merchant ships, interfering with our trade, kidnapping our sailors and forcing them to join their navy.  They sent their armies to Canada to try and conquer us from the north. So, instead of cowering and realizing we could never win against the greatest military force in the world, we declared war, took up arms, both black and white men, and we fought as hard as anyone could fight.  God help us, it was liberty or death. We would not lose our hard-won freedom!

Yet toward the end of the war, things didn't look good. The British navy had set up a blockade on one of the most important waterways, the Chesapeake Bay. They raided farms and outposts, murdered innocent civilians and looted goods and food. Then the worst thing possible happened. They marched on our precious newly-built capital, Washington D.C. and burned it to the ground. President Madison and his staff fled and the British officers entered the White House and trashed it.  It looked like all was lost.

But there was one city left the British had to conquer. One port city that if they took it, they could claim a definitive victory. Baltimore. Baltimore was a port city with a population of around 40,000. They had no army and one fort to protect their harbor, Fort McHenry.  The British assumed they would have no difficulty overrunning the city, just as they had done with Washington, so they planned both a land and sea attack. The sea attack was most important for if they could get past the fort and enter the harbor, the British navy ships could fire their cannons upon the city itself.

Here's a brief history of what happened:

At noon on September 11th, 1814, the British fleet sailed to the mouth of the Patapsco River and anchored off North Point, just fourteen from Baltimore. Arrogantly spurred on by their successful march into Washington DC three weeks earlier, the British planned to attack the “Nest of Pirates”, as they called the city, from both land and sea. Early in the morning on September 13th, while British troops advanced on land from North Point toward the city, five bomb ships and several other war ships maneuvered into a semi-circle two miles from Fort McHenry. Just after dawn, the bombing commenced.

Major Armistead, commander of the fort, would later estimate that in the next twenty-five hours, the British would hurl at them between 1500 and 1800 exploding shells. A few never hit their mark, but most exploded directly over the fort, showering destruction on the defenders. One bomb exploded on the southwest bastion, destroying a 24-pounder, killing Lt. Levi Claggett, and wounding several men. Soon after, another shell crashed through the roof of the gunpowder magazine. By the grace of God, it did not ignite, and Major Armistead soon ordered the barrels of powder removed and stored elsewhere.

While the British land invasion was failing due to the courage and preparation of Baltimore’s militia, the bombardment of Fort McHenry continued throughout the long night. Finally at 7:00 am on Sept 14, the shelling ceased and the British fleet withdrew. Major Armistead immediately brought down the dripping storm flag that flew over the fort and hoisted in its place the forty-two by thirty foot flag sewn by Mary Pickersgill, the action accompanied by the fort’s band playing Yankee Doodle.

Eight miles away, held prisoner aboard HMS Tonnant, where he had gone to arrange a prisoner release. Sir Francis Scott Key, watched the entire battle through the long night, wondering, hoping, praying for his country to be victorious, but knowing they faced an overwhelming enemy. Finally as the sun began to rise, he spotted our great flag still flying over the fort.  Overcome with emotion at the sight of the flag, he penned what would become our National Anthem, The Star-spangled banner.

Miraculously, Baltimore successfully defended itself against an attack by the greatest military and naval power on earth. The humiliating defeat suffered by the British changed the course of the war and three months later, on Christmas Eve, Britain made peace with the United States at Ghent. In Baltimore, the Niles Weekly Register announced the news with “Long live the Republic! All hail! Last asylum of oppressed humanity!”

Indeed, we are the LAST asylum of oppressed humanity. So, when I see people who have benefited greatly from the freedom and opportunity of this great nation... riding on the backs of those who died to keep us free... I must admit, my anger grows.  If you don't like something about this great nation, then go about changing it through public awareness, education, and voting. Otherwise, if all you're going to do is spit upon my nation's flag and disrespect the millions of men and women who have died so you can be free and be enormously successful, then please leave. We don't want you here

If you've made it this far, here's a copy of what Francis Scott Key wrote that day when after watching the British fire rocket after rocket upon Fort McHenry all through the night, he finally saw that the American flag still waved in the morning. It's actually quite beautiful.

Oh, say can you see by the dawn's early light
What so proudly we hailed at the twilight's last gleaming?
Whose broad stripes and bright stars thru the perilous fight,
O'er the ramparts we watched were so gallantly streaming?
And the rocket's red glare, the bombs bursting in air,
Gave proof through the night that our flag was still there.
Oh, say does that star-spangled banner yet wave
O'er the land of the free and the home of the brave?

On the shore, dimly seen through the mists of the deep,
Where the foe's haughty host in dread silence reposes,
What is that which the breeze, o'er the towering steep,
As it fitfully blows, half conceals, half discloses?
Now it catches the gleam of the morning's first beam,
In full glory reflected now shines in the stream:
'Tis the star-spangled banner! Oh long may it wave
O'er the land of the free and the home of the brave!

And where is that band who so vauntingly swore
That the havoc of war and the battle's confusion,
A home and a country should leave us no more!
Their blood has washed out their foul footsteps' pollution.
No refuge could save the hireling and slave
From the terror of flight, or the gloom of the grave:
And the star-spangled banner in triumph doth wave
O'er the land of the free and the home of the brave!

Oh! thus be it ever, when freemen shall stand
Between their loved home and the war's desolation!
Blest with victory and peace, may the heav'n rescued land
Praise the Power that hath made and preserved us a nation.
Then conquer we must, when our cause it is just,
And this be our motto: "In God is our trust."
And the star-spangled banner in triumph shall wave
O'er the land of the free and the home of the brave!