Do we preach half a Gospel? 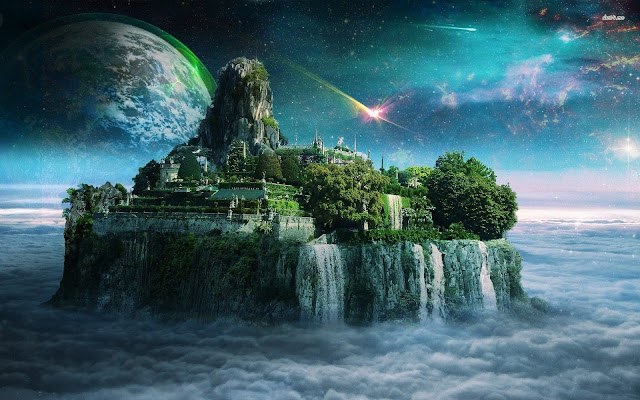 If you ask most Christians today what is the message of the Gospel, I guarantee that 99% will say something like. "Mankind is eternally separated from God because of our sin, so God sent Jesus, His only Son to earth, to live a sinless life, and die on the cross and rise again to pay for all our sin. If we believe in Him, God will forgive all our sins and we will go to heaven when we die."

Sound good, right?  Well, yes, all that is true, and the cross of Jesus is definitely the most important and essential part of the Gospel, as is the resurrection. However, what most Christians have been taught is only half of the good news. There's another part of the message that Jesus preached that unfortunately gets ignored in most sermons, but it's a part that holds a great deal of power.

Let me ask you this: Why does Jesus save people? For what purpose?

Most Christians will say "so we can go to heaven"
Some Christians might even say "So we won't go to hell"   Though recent polls have indicated that almost half of people who call themselves Christians don't believe in hell.

Both of the above answers are true to some extent but in truth, Jesus did not save us so we could go to heaven.  Heaven is not our final home. It is merely a place for us to live until Jesus returns to earth to rule and reign for 1000 years.

What if I told you that God didn't save you just from hell or for heaven, but he saved you to be a part of His Kingdom.  God is creating a kingdom, complete with a King, princes, princesses, ambassadors, military generals, treasurers, administrators...etc. And He needs people in this Kingdom to perform various tasks.  Think I'm crazy? Look at the following verses.  (I know there's a lot of them. Just scan them if you're in a rush. I simply want you to see how important the kingdom is to Jesus and His followers and the power of preaching the Kingdom message)

In those days John the Baptist came preaching in the wilderness of Judea, 2 and saying, “Repent, for the kingdom of heaven is at hand!” Matthew 3:1-2

And Jesus went about all Galilee, teaching in their synagogues, preaching the gospel of the kingdom, and healing all kinds of sickness and all kinds of disease among the people. Matt 4:23

The Lord's prayer is all about God's Kingdom!
Your kingdom come. Your will be done On earth as it is in heaven. ...But deliver us from the evil one.
For Yours is the kingdom and the power and the glory forever.

But seek first the kingdom of God and His righteousness, and all these things shall be added to you Matt 6:33

Notice in the above verse it doesn't say Seek God or Seek the Gospel or Seek Holiness. It says Seek First the Kingdom!

Then Jesus went about all the cities and villages, teaching in their synagogues, preaching the gospel of the kingdom, and healing every sickness and every disease among the people. Matt 9:35

Notice in the above verse it is the Gospel of the Kingdom, not just the Gospel

But if I cast out demons by the Spirit of God, surely the kingdom of God has come upon you. Matt 12:28

In Matthew 13, Jesus tells several parables and in each one he references the Kingdom. There are too many verses to list here

The Son of Man will send out His angels, and they will gather out of His kingdom all things that offend, and those who practice lawlessness, Matt 13:41

“Assuredly, I say to you, there are some standing here who shall not taste death till they see the Son of Man coming in His kingdom.” Matt 16:28

Therefore whoever humbles himself as this little child is the greatest in the kingdom of heaven. Matthew 18:4

And this gospel of the kingdom will be preached in all the world as a witness to all the nations, and then the end will come. Matt 24:14

But I say to you, I will not drink of this fruit of the vine from now on until that day when I drink it new with you in My Father’s kingdom.” Matt 26:29

Yes, indeed, At This Time, God's Kingdom is not a physical Kingdom. But that doesn't make it just as real. God's Kingdom exists in the spirit realm. It is invisible to our eyes and our senses, but it exists all around us. The angels and demons in the spirit realm can see it. Believe me, they know exactly who is part of the Kingdom and who is not. Jesus is a King and He is on His throne in heaven, but someday when He returns to earth, He will establish His Kingdom in the physical realm as well as the spiritual.

The really cool part is that if you are a true believer in Jesus, then you are already part of His Kingdom. And because we are already in the Kingdom, we can receive some of the benefits now. Here's just a small list.

Here's just a few of the verses regarding the benefits
for the kingdom of God is not eating and drinking, but righteousness and peace and joy in the Holy Spirit. Romans 14:17

For the kingdom of God is not in word but in power. 1 Corinthians 4:20

He has delivered us from the power of darkness and conveyed us into the kingdom of the Son of His love, Colossians 1:13

Therefore, since we are receiving a kingdom which cannot be shaken, let us have grace, by which we may serve God acceptably with reverence and godly fear. Hebrews 12:28

When the Kingdom actually comes into the physical realm here on earth, we will experience even more benefits!  For one thing, we will be give tasks/jobs/assignments in the kingdom. Some of us will receive rulerships and authority over cities/towns/countries. But there are many blessings to come that our minds cannot comprehend.

So why bring this up?  I encourage you to go to Bible Gateway and type in Kingdom in the word search for the New Testament. You will soon see that everything Jesus preached was about the Kingdom and also the Apostles preached the Kingdom too.  It is the Gospel of the Kingdom, not just the Gospel. And wherever the Kingdom was preached, miracles happened, people were healed, delivered and set free. There's something powerful about preaching the Gospel of the Kingdom and not just telling people they can be saved from hell and get to heaven. Some unbelievers aren't even interested in heaven. They are enjoying their sin too much to think about some mystical place after they die. But a kingdom? Now that's powerful and exciting stuff. If it was good enough for Jesus and the apostles to preach, it is good enough for us. Through the sacrifice of Jesus, we are not only totally forgiven of our sins, but we then enter a Kingdom, are a part of something bigger than themselves, receive an assignment, and enjoy some of the benefits of a Kingdom that will last forever and ever!!

Next week, getting into and staying in the Kingdom