More than one rapture? 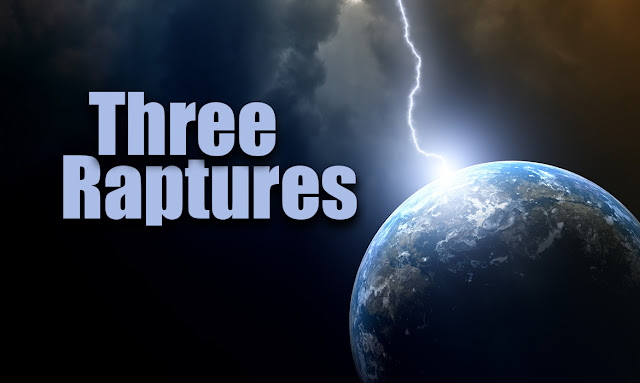 The dual nature of Jesus's two comings; one as a suffering servant, and the other as the avenging Lion of Judah who will rule and reign, are both prophesied in Scripture. Trouble is, most of the Jewish rabbis and scholars at the tine of Jesus's birth missed that. They clearly saw that the Messiah would come and deliver Israel and then set up His Kingdom out of Jerusalem, but they missed that the Messiah first had to suffer and die for the sins of mankind. In fact, most of the Jewish people have still missed that first coming for thousands of years. I will agree that the Scriptures that pertain to the suffering Messiah are not in-your-face blatantly clear, but rather they are scattered here and there and often intertwined with other prophecies. Only in hindsight can we truly spot them clearly.

Why am I telling you this? Because I think it might be equally as easy for our present day Bible scholars to miss that there might be multiple raptures.  Some don't believe in any rapture, others in a pre-tribulation rapture, others in a mid-tribulation rapture and finally there are those who believe we are here until the end and taken right as Jesus returns. Each group has a list of Scriptures to prove their stance.  But what if they were all correct? What if what they are each seeing in Scripture are prophecies that pertain to different raptures?

What if there was going to be a pre, mid, and post tribulation rapture? Three raptures during the final 7 or so years of tribulation on earth. I recently came across this information and I find it somewhat credible. I'm not saying I believe it fully. I'm only giving it here as food for thought. And for hope. (I'll explain at the end why this is so hopeful!)


Jesus often referred to the gathering up of believers (and in some cases unbelievers) from the earth as a Harvest. He used the farming/harvest analogy often of believers growing in Him right alongside unbelievers. Instead of listing all those Scriptures here, I encourage you to go to Bible Gateway and do a search on the word "harvest" in the New Testament. The Apostle Paul also used this analogy in  both Romans and Corinthians, and then, of course, John also did so in Revelation.

There are three main major harvest cycles in Israel.

Barley - happens around Passover time. Passover is a 7 day feast of unleavend bread. Barley is a very soft grain and is harvested by winnowing, which is a process of throwing up the barley into the air and allowing the wind to blow the chaff back down to earth. (Hmm, remind you of something?)  Jesus as you know is the firstfruits of those who are raised. He was raised on the Feast of Firstfruits. We are called the firstfruits as well.

But Christ has indeed been raised from the dead, the firstfruits of those who have fallen asleep. For since death came through a man, the resurrection of the dead comes also through a man. For as in Adam all die, so in Christ all will be made alive.  But each in turn: Christ, the firstfruits; then, when he comes, those who belong to him 1 Corinthians 15:20-23

At dawn on the first day of the Barley harvest, the priests would gather the firstfruits of barley and bring it to the Temple as a wave offering. This was actually happening just as Jesus rose again in the morning of FirstFruits. 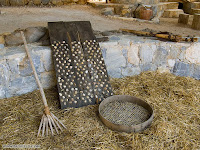 Wheat Harvest - This happens later in the springtime/early summer since wheat takes longer to ripen than Barley and normally occurred around Pentecost. Wheat has a harder shell and had to be crushed to separate the grain from the shell. (Hmm, hard shell... had to be crushed. Interesting) This process was preformed using a hard board with embedded rocks. Guess what it was called?  A Tribulum, which is where we get the word tribulation from.  Yup. you can't make this stuff up. This was the main harvest in Israel and was much larger than the Barley harvest.

By the way, we do know of 2 separate raptures during the 7 year tribulation. The 144,000 Jewish believers who were sealed during the tribulation (Revelation 7, 14) seem to have been raptured at some point to heaven, and the two witnesses who rise from the dead and are taken up to heaven. (Revelation 11)  Is it possible that other believers might also be taken along with them at that point? We know that when Jesus rose from the dead, several saints also rose at that same time.

And the graves were opened; and many bodies of the saints which slept arose,  And came out of the graves after his resurrection, and went into the holy city, and appeared unto many. Matt 27

Grape Harvest - Grapes were always harvested in the fall around the time of the Feast of Tabernacles. For the most part, this is not the harvest you want to be included in. The majority of this harvest will be crushed in the winepress of the wrath of God. This harvest is for all those who refuse to repent and turn to God. However, it appears from Revelation 14 that before these people are havested, Jesus, Himself, comes out and gathers up any left of those who follow Him.

Jesus first harvests the grapes
Then I looked, and behold, a white cloud, and on the cloud sat One like the Son of Man, having on His head a golden crown, and in His hand a sharp sickle. And another angel came out of the temple, crying with a loud voice to Him who sat on the cloud, “Thrust in Your sickle and reap, for the time has come for You to reap, for the harvest of the earth is ripe.” So He who sat on the cloud thrust in His sickle on the earth, and the earth was reaped. Rev 14:14-16

Then an angel finishes the harvest
Then another angel came out of the temple which is in heaven, he also having a sharp sickle.....
The angel swung his sickle on the earth, gathered its grapes and threw them into the great winepress of God’s wrath. Revelation 14:19

Note: This cannot be the rapture spoken of by Paul because there is no trumpet mentioned.

If you know anything about the Jewish Feasts, the Feast of Tabernacles celebrates God living with man and it will find its ultimate fulfillment when Jesus returns to rule and reign on the earth. But first He must judge.

I find these harvest cycles fascination, in particular in the way they are associated with the Jewish Feasts. (The Jewish feasts are also called God's appointments)  I also find it interesting that the Barley Harvest is a much smaller harvest than the Wheat.  What if the Barley Harvest was the pre-tribulation rapture, the wheat represented the mid-trib rapture and the grape, the post trib?  If that is the case, that would either mean that not ALL so-called believers are going in the pre-tribulation rapture, but only a portion of them OR there are going to be a ton of "new" believers after the first rapture.

If all believers are raptured first, (and it's a small harvest), I start to wonder where all the new believers come from (wheat harvest is huge). If there are no believers left to witness, how do they learn the truth? Some say from the 144,000 Jewish evangelists, and that may be true. But I tend to believe that only a portion of believers are taken in the first way, leaving a bunch of people who know the truth and understand why they got left behind

Who are these special believers? I believe the best one word description of them is "Overcomers", and you can read about them in Revelation 2-3. I believe they are those who are true disciples of Jesus, those who daily take up their cross and follow Him, those who are 100% living for Him. It's a matter of the heart, not works. We are warned over and over in Scripture to live for God and not for this world.

Since you have kept my command to endure patiently, I will also keep you from the hour of trial that is going to come on the whole world to test the inhabitants of the earth.  Revelation 3:10

In the Scripture above, Jesus is talking to the church, to believers. Think about that.

Paul indicates in Philippians 3:10-14 that he's unsure whether even he has attained to "the resurrection from the dead" (aka rapture). But that he presses on to that goal. Why would he say such a thing? He knows he's saved.

I want to know Christ—yes, to know the power of his resurrection and participation in his sufferings, becoming like him in his death, and so, somehow, attaining to the resurrection from the dead.  Not that I have already obtained all this, or have already arrived at my goal, but I press on to take hold of that for which Christ Jesus took hold of me.

When the wheat harvest comes, it's a much larger group of people who have run into the arms of their Savior and are fully committed now. They've lived through half or at least some of the tribulation and they want out!   (For more info read Revelation 7. It speaks of a GREAT Multitude in Heaven arrayed in white robes who have come Out of the Great Tribulation. )

There are two reasons I hope this is true.

Those carnal or drifting believers who miss the first boat will certainly know what has happened and will quickly recommit their lives to the Lord, and hence, make it in the 2nd wave. This gives me hope for so many of my family and friends who either don't know the Lord or who don't take their Christian walk seriously.  (Not saying that I will even make the first boat!)  But think about it. Many prophets are predicting a huge revival in America coming soon. In our present church culture, I don't see that happening, unless... well, perhaps the first rapture is the catalyst.

This sounds just like something our wonderful God would do. Doesn't He give people multiple chances to get saved? Throughout Scripture He keeps appealing to people, keeps coming back, keeps trying to get people to turn to Him. He did this and is still doing this with the Jewish people. He did this with me, too. He has a ton more patience than I do! He gives chance after chance after chance. So, to me, this just seems like the incredible grace of God, trying to get people to turn to Him and escape the worst of the tribulation.

Is it true? I guess time will tell.  But if so, I want to go in the Barley Harvest! You?