What happens in Heaven when you pray? 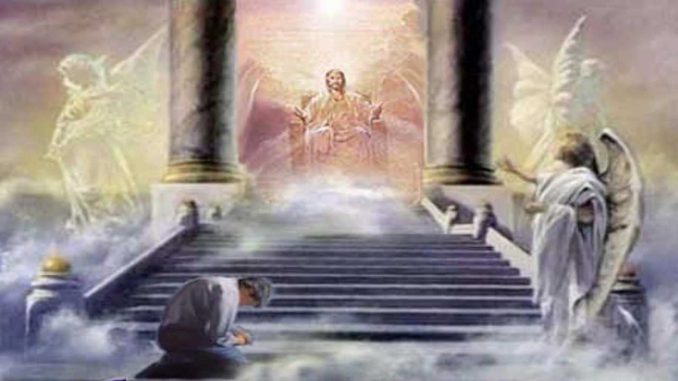 Katie was late for work as usual. After getting the kids up, fed, dressed and out the door to the carpool to school, she barely had time to down a cup of coffee, put on some makeup, do something with her frizzy out-of-control hair, dress in something professional and kiss her husband goodbye. Now as she was driving down the freeway--more like creeping along bumper to bumper--she remembered she'd not spent any time in prayer. Her New Years resolution and vow to God had been to find time in her busy life to just sit before the Lord. She'd started off great through January, February and most of March, and she had felt better for it. More at peace, more loved, and able to cope with her life. But when several of her prayers had not been answered, she'd slowly lost that enthusiasm, and whispered doubts crept into her mind.  "God doesn't have time for you. You've been too sinful. You haven't changed enough to be worthy of His attention. He doesn't care about your petty problems. You don't have enough faith."

One by one, she'd entertained those doubts until days even weeks went by in which she did not stop to pray. She loved Jesus. She really did. He had saved her in more ways than one, but she always had such a hard time connecting with Him in prayer, actually believing that He loved her and was truly listening and cared about her.

Someone beeped at her from behind, startling her, and she crept forward another couple yards. A sea of red tail lights flashed in her vision like warning sirens. She should pray. She certainly wasn't going anywhere for awhile. Putting on her blinker, she checked her mirror and eased off the freeway onto the side of the road. She shut down the engine, leaned back in her seat, closed her eyes and said "Dear Father...."

The throne room was a flutter of activity as usual. Father God sat on his golden throne in the middle of a dais with ivory steps splayed out by his feet. Light emanated from Him brightening the entire room so there was no need for any other light. Beside Him, His Son sat on His throne, the figure of a man with hair like white wool, a golden sash over his robe, eyes like flames, and a smile on His face. A rainbow spread above them, and lightnings flashed across it as thunder roared its worship. On either side of the throne were strange creatures with different faces, wheels, eyes everywhere and six wings. They sang in unison "Holy, holy, holy is the Lord God Almighty, who is, who was, and who is to come."  Myriad of Angles were in attendance around the throne in every direction as far as the eye could see. They sang songs of worship and praise to the Father and the Son... the sound of which was more beautiful than anything on earth. Before the throne was a sea of crystal that glistened in the light of the Father. Angels moved in and out before the throne, reporting to the Father on tasks completed. Every once and awhile Jesus would lean into the Father's ear and make a remark on one particular incident.

"Lord, God," One of the angels pushed his way through the line waiting to see the Father. Approaching the throne with reverence, he said. "Katie Johnson requests an audience, Your Majesty."

God looked up, exchanged a smile with Jesus, and then gestured for her to come forward. "My precious princess, Katie, come. Come sit before me. We have missed you."

All the clamor, the singing, the hustle and bustle of the throne room ceased. All the angels waiting to be heard stood still, as the angel ushered Katie forward to stand before the King. At first she was timid, afraid, unsure, but the Father gestured her forward. "Come, precious." Jesus stood, descended a few stairs and held out his hand for her. A large hole pierced his wrist. Katie put her hand in his, but shifted away, unable to see the tears of love in His eyes. Love for her!

"Come dear Katie, we've been longing to spend time with you, our daughter." 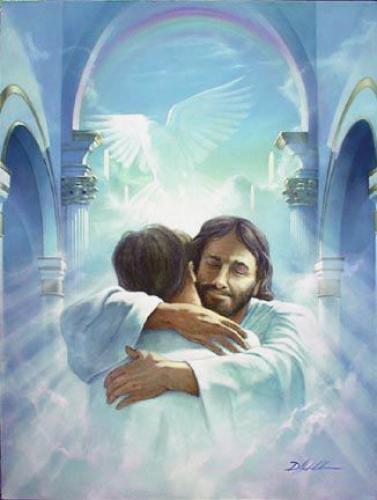 The Lord gave this scene to me the other day while I was praying. I was feeling much the way Katie was feeling before she stopped to pray--unworthy, fearful, unsure whether God cared or heard me. This is what He told me to write for you today. Do we understand how valuable we are to God? Do we have a clue? He has adopted us into His family. We are His precious children. He longs to spend time with us, longs for us to come to Him, longs to see us, speak with us. Do we realize the privilege we have to come before the throne, to be ushered in like royalty, to stop all activity because our Father is so happy to see us?  Let this scene sink into your thoughts today and remember it the next time you pray. God does hear. God does care. God longs to spend time with you!