Why are those who take the Mark of the Beast unredeemable?

“If anyone worships the beast and his image, and receives his mark on his forehead or on his hand,  he himself shall also drink of the wine of the wrath of God, which is poured out full strength into the cup of His indignation. He shall be tormented with fire and brimstone in the presence of the holy angels and in the presence of the Lamb."  Revelation 15:9-10

Have you ever asked yourself why people who take the Mark of the Beast are forever dammed? I've been thinking about this lately. What if someone who didn't know the Lord or End Times prophecy took the Mark out of ignorance simply because he wanted to feed his family? Then what if that person later heard the Gospel and wanted to change his mind? Throughout Scripture God gives His people Multiple chances to return to Him. In fact, I believe He gives us chances right up unto our last breath.  So, why is this Mark so damming?  (This may be one of the weirdest posts I've written, so bare with me. It's rather long, too, sorry. I hope you find my theory interesting!)


In the Bible, are there any people or people groups whom God declares irredeemable?

1. Mark 3:29  Jesus is speaking. "but whoever blasphemes against the Holy Spirit will never be forgiven; they are guilty of an eternal sin.”

2. Hebrews 6:4-6
"For it is impossible for those who were once enlightened, and have tasted the heavenly gift, and have become partakers of the Holy Spirit, and have tasted the good word of God and the powers of the age to come, if they fall away, to renew them again to repentance, since they crucify again for themselves the Son of God, and put Him to an open shame."

I'm not interested in what commentaries say about this verse. It's quite plain. I could write an entire post on this, but I'll try to be brief here. I looked up the following words in Greek

Enlightened means more than just knowing the truth, they have experienced it, as in sharing the light of God
Tasted the heavenly gift - experienced a gift that originated in heaven. Could be salvation or one or more of the gifts of the Spirit
Partakers of the Holy Spirit - obviously this person is saved. This could also mean he was baptized in the Holy Spirit
Tasted the good word of God - the meaning of "word" here is rhema in the Greek, which is not the written Word, but the spoken Word. In other words, this person has heard directly from the Lord. They have conversations with God
Powers of the age to come. - Powers here means miracles or mighty works of God. This person has either performed miracles in Jesus' name or he has seen them  or taken part in them

Wouldn't you say this person is definitely saved? Hard to argue with that. Not just saved, but this seems to be a person who has reached a very close walk with God. He or she hears from God and partakes in miracles.  Then if this person rejects Jesus and walks away, the Bible is clear here that it is impossible for them to be saved again. Please don't misunderstand me, I don't believe this refers to carnal Christians or prodigals, but someone who has been super close to the Lord and then defiantly denied Him both in word and deed.
But let's move on. There's actually another type of being that cannot be saved, the Fallen Angels who rebelled with Satan. We never see a single place in the Bible that says they have an opportunity as we do to receive Jesus and be saved. In fact, they are much like the person described in Hebrews 6 above. They knew God. They were in heaven. They experienced God and all His power. Yet they turned away from Him.

In the book of Enoch, (which I believe is very Scriptural. Jesus Himself quoted from Enoch, so that's good enough for me) there's a great story about these fallen angels and how they appealed to God for forgiveness, but God denied them.  Perhaps I'll do a post on this later.

Now it came to pass, when men began to multiply on the face of the earth, and daughters were born to them,  that the sons of God saw the daughters of men, that they were beautiful; and they took wives for themselves of all whom they chose......There were giants on the earth in those days, and also afterward, when the sons of God came in to the daughters of men and they bore children to them. Those were the mighty men who were of old, men of renown.  Genesis 6:1-4

Some pastors and commentators will tell you the phrase "sons of God" refers to the descendants of Seth and not angels.  I have done my homework on that and it is my opinion that "sons of God" here refers to the fallen angels. Job mentions sons of God often in reference to angels and also Enoch contains the story of the fallen angels procreating with human women. If you don't believe this, you probably won't believe the rest of what I have to say. But if you think it's a possibility, read on!

In fact, I believe this mixing of the races of angels and human was the MAIN reason God sent the flood. Before Jesus arrived, Satan's main goal was to pollute the bloodline of Jesus so the Messiah could never be born. Breeding of fallen angels and man was one way to achieve this. Once someone has fallen angel DNA in them, they are irredeemable. These ancient Nephilim were the giants the Israelites were ordered to exterminate in the land of Canaan as they entered the promised land. 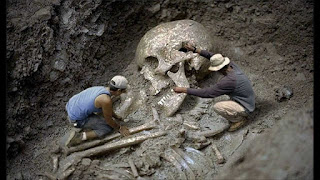 Yet again there was war at Gath, where there was a man of great stature, who had six fingers on each hand and six toes on each foot, twenty-four in number; and he also was born to the giant. 2
Samuel 21:20

Do you ever wonder why God ordered the Israelites to completely wipe out not only the enemy soldiers, but their women, children, and animals?  It sounds cruel, doesn't it? I mean, why the babies and animals?  But what if this Nephilim DNA had infected even the animals?  God couldn't have the Jewish people infected with this DNA or Jesus would have never been able to come to earth. 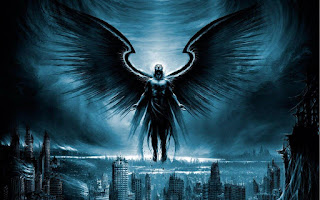 We also know that these fallen angels are still among us. Why? Well, they are eternal beings, right? The flood didn't wipe them out, so where are they?  Many people think they are the demons the Bible talks about and that could be true. They are definitely rulers of these demons. Do you think for one minute they stopped trying to procreate with women? They gave up? I doubt it. They just went underground and are doing it in secret. Yes, I believe we still have Nephilim among us. They are just hiding. Or perhaps some are currently in our government. (That was a joke, but not really)

I'm going to wrap this up, I promise, though some of you may have already guessed where I'm going. Scientists are currently developing what they call a Biochip. This is a chip inserted into a person that has the ability to examine their DNA to determine if they have a propensity for certain diseases. However technology is advancing so fast, they predict that they will be able to actually alter DNA to help people not get sick in the first place. Sounds great, doesn't it?

Here's a few articles I found, but you can research them on your own. Just google "DNA biochip"
What is the Biochip?
DNA and Biochips
DNA microchip technology

What if the Antichrist gets a hold of this and somehow puts Nephilim DNA on the chip?  If a person then takes the chip, they are inflected with Nephilim DNA and would then be irredeemable.

So, that's my theory! I think I've given you enough proof that it's a possibility. Otherwise, I can't figure out why taking the Mark of the Beast would be a capitol offense in God's eyes. I mean, many people throughout history have worshiped Satan and demons, but still repented and came to know the Lord

Why is this important? For a number of reasons. I felt compelled to write this post (Even though I think I may lose some followers)  for those left behind after the rapture OR if we find ourselves still here when the Mark of the Beast is instituted. We need to be warned why we should never ever ever take it!

Thoughts? Did I lose you in here somewhere? LOL