Looking for and longing for eternity! 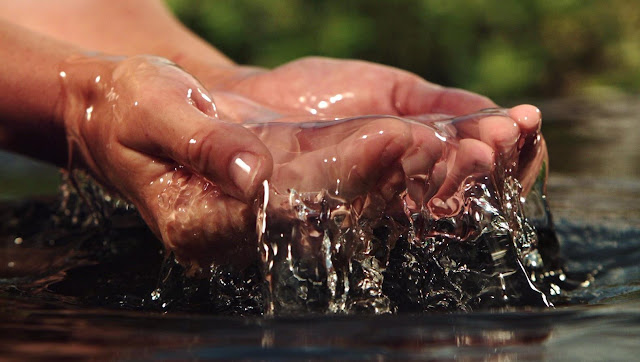 There are two scenes from the movie, Paul, an Apostle of Christ that I can't seem to get out of my mind.When I was praying about what to write this week, I truly felt led to expound on these scenes and what they mean for us today.

I keep asking myself what made the early Christians so strong? What made them so dedicated to the Lord, so in love with Him, so strong in their faith that they were willing to live in terror and die in torture?  They were persecuted from every side, from neighbors and friends and fellow citizens. Their businesses were attacked. They often had to meet in secret, and finally the emperor of Rome decided to blame all the empire's ills on Christians. 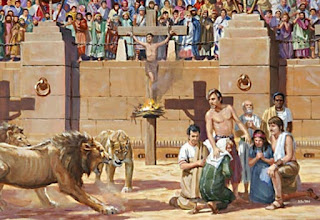 Emperor Nero used all kinds of punishments against the Christians. He had some sewed up in the skins of wild beasts, and then turned savage dogs loose on them until they were chewed to pieces. Other Christians were dressed in shirts dipped in wax, tied to poles, and set on fire in Nero’s garden. Many were shot with arrows, and many others were thrown into the arena, where they were killed by savage lions and other wild beasts.

I want you to stop and try to imagine what it would feel like to be set on fire from your feet up. If you think you'd pass out quickly, think again. Remember the last time you accidentally burned yourself? Just a touch to the stove or perhaps you grabbed a pan you didn't know was hot?  The pain these Christians went through was excruciating. What about those who were tossed into the arena? I'm talking women and children too. There you are, a young mother with a 5 year old by your side and an infant in your arms. And you know there's nothing you can do to protect them as the starving lions make a beeline for you.

Yes, I think about these things. I'm not trying to upset anyone, but I want you to realize the faith these people had. In one of the scenes in the movie, Luke was in a cell with a bunch of other Christians and they were all going to be tossed in the arena the next morning with the lions.  They were understandably terrified, but Luke gathered them together and told them that yes, they would feel pain, but it would only last a moment, and then they'd be escorted into an unimaginable paradise with Jesus.

In another scene, Paul was speaking to the commander of the prison he was being held in. He was trying to explain why Christians are willing to suffer. He held out a hand and said something like, Imagine you dip your hand into the sea and bring up water. But after a few seconds, that water runs out through your fingers and is no more. Then, he said, People in the world live for that tiny bit of water that is soon gone. But Christians live for the entire sea beyond it.

You see, the early Christians had a very different perspective on life than most modern Christians. They did not look at this world as something to enjoy. They did not look at their lives and expect happiness, prosperity, and comfort. They realized without a shadow of a doubt that an eternity awaited them beyond this world, that this world wasn't reality, but there was another place, another time and dimension that was the REAL world. And because Jesus died and rose again, they were destined for this place. Nothing else mattered to them but spreading the Gospel, bringing God glory, and going home to be with Him.

They were strong because they knew Who they believed and they knew where they were going. They weren't living for this world. And this hope, this belief gave them the FAITH they needed to persevere. Don't believe me? Read Hebrews 11, also known as the faith chapter. It speaks about the incredible faith of all the patriarchs and saints.

All these died in faith, without receiving the promises, but having seen them and having welcomed them from a distance, and having confessed that they were strangers and exiles on the earth. For those who say such things make it clear that they are seeking a country of their own. And indeed if they had been thinking of that country from which they went out, they would have had opportunity to return.  But as it is, they desire a better country, that is, a heavenly one. Therefore God is not ashamed to be called their God; for He has prepared a city for them. Hebrews 11:13-16

Yet so many Christians in the west appear to be doing just that. When things don't go their way, they complain and grumble. Or worse, blame God. When life gets tough, they get depressed. When they get together, what do they talk about? About saving souls, doing the work the Lord has called them to? Excitement that Jesus is coming soon?  Nope.  All I hear it the same stuff the world talks about.. jobs, money, kids, sports, the weather, hobbies, vacations. Prayer request time ends up being a litany of  complaints and a soliloquy of fears.  I can't tell you the number of times I've brought up a topic about the Lord, only to have a Christian friend change the subject. If I bring up the fact that Jesus is coming soon, some actually get angry at me. Many Christians don't want to leave this world. They are comfortable here. They have good lives. They have no faith to look forward to their heavenly home.

This may sound harsh, but I feel led to say it. If you aren't excited about Jesus coming soon. If you don't want to leave this world. If you don't enjoy discussing Biblical topics, then you don't love the Lord. Have you ever met someone in love? They can't stop talking about their loved one! They can't stop, even though it may drive you crazy! They are so excited to see that person again, it's all they think about. This is how we are supposed to feel about Jesus! This is how the early Christians felt about Him. It's what gave them the strength to endure so much pain and torture. Because they knew they'd see Him soon. They knew eternity awaited them.

If you don't feel that way, it's not too late. You can!  The remedy?. Spend time with Jesus. Spend time in His Word, in prayer, just hanging out with Him and talking to Him. Ask Him to give you a vision, a longing, for eternity, for your eternal home.  The more time you spend with Him, the more the world around you will become less and less important. Fall madly in love with Jesus. He's easy to love.


And the world is passing away, and the lust of it; but he who does the will of God abides forever.
1 John 2:17