There are some very interesting dates and events coming up that I thought I should tell you about. I'm not setting a date for the rapture. I'm merely pointing at some interesting signs. Honestly, I don't think we will know the exact day or hour, but I do believe that when it happens, those of us who are watching will not be surprised.

Having said that, there's a rare blood moon occurring on July 27th. What is a blood moon?  A blood moon is simply when the moon is in full eclipse and hence, completely in the earth's shadow. When that happens, some of the light from the sunrise and sunset on earth (around the edge of the disc) passes through the atmosphere and shines on the moon, making it appear red.  It's not a rare event, however, having a tetrad of them fall on Jewish feast days as they did in 2014 and 2015 was quite rare. 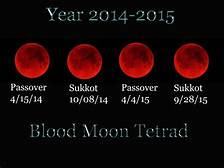 Regardless, we have another one happening this month. The interesting thing is it is the longest lunar eclipse in a century AND it will be seen from Israel.

But there are also some Jewish historic dates around this time that you may find interesting.

Who is the current temple of God? We are. Believers in Jesus. Food for thought.

There's another interesting Jewish holiday this month that falls on the 15th of Av, July 27th. The holiday is called Tu B'Av.  This is the Jewish day of love comparable to our Valentine's Day.
According to myjewishlearning.com,

Tu B'Av served as a matchmaking day for unmarried women in the Second Temple period (before the fall of Jerusalem in 70 C.E.). Tu B’Av was almost unnoticed in the Jewish calendar for many centuries but it has been rejuvenated in recent decades, especially in the modern state of Israel.
There were no better (i.e. happier) days for the people of Israel than the Fifteenth of Av and Yom Kippur, since on these days the daughters of Israel/Jerusalem go out dressed in white and dance in the vineyards. What were they saying: Young man, consider whom you choose (to be your wife)

What caught my eye on this were the women dressed in white and the young men choosing who would be his wife. We are the bride of Christ, whom He chose to be His, and we are often described as being dressed in white.

I had never heard of this holiday, but found it fascinating. I hope you do too!
Also, as a reminder, we are in the 70th year of Israel becoming a nation. As I mentioned in a previous post, Psalm 90:10 declares a generation to be 70, maybe 80.

Now learn this parable from the fig tree: When its branch has already become tender and puts forth leaves, you know that summer is near. So you also, when you see all these things, know that it is near—at the doors! Assuredly, I say to you, this generation will by no means pass away till all these things take place Matt 24:32-33

And finally, do not let it escape your notice that Jesus said "summer".  Nothing in the Bible is there by chance. Summer is the time of the wheat harvest in Israel, and Jesus often referred to believers as wheat (false believers as tares) and the rapture as a harvest.  One such example is in Matt 13.  I encourage you to read the entire chapter.

Don't grow weary in waiting and watching!  The King is coming!