Let us cross over to the other side! 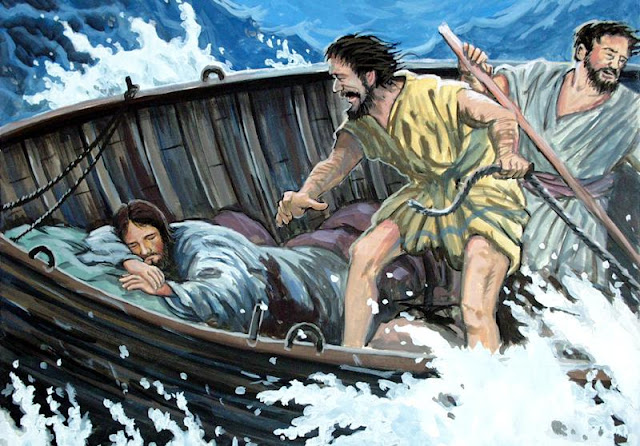 On the same day, when evening had come, He said to them, “Let us cross over to the other side.” Mark 4:35

Do you know Jesus is saying the same thing to you and me today? If you are a committed follower of Jesus, the moment you repented and gave your life to him is the moment He held out His hand and said to you, "Let us cross over to the other side."

What other side?  In the story in Mark, it was the other side of the Sea of Galilee. Jesus had just completed many long days of preaching and healing to the multitudes and He was tired! In fact, it was very difficult for Him to find any time alone or any time of peace. So, He got in the boat with His disciples and said, "Let's go to the other side."

But what is our other side?  Honestly, this became very clear to me last week when I seemed to be drowning in earthly problems. Have you ever had seasons where it seems one problem after another keeps coming your way and you wonder when it will end?  Well, that's been me lately.  During these times the devil likes to whisper in your ear things like:

Sound familiar? Our enemy has not changed his tactics in over 6000 years. However, sometimes I admit to wondering what is going on!  Then the Lord brought me to the story above in Mark and He reminded me that this life here on earth is just a journey.... a short boat ride to the other side.

And a great windstorm arose, and the waves beat into the boat, so that it was already filling. But He was in the stern, asleep on a pillow.

A storm arose suddenly! Imagine that. A problem, a struggle in this fallen world? I laugh because that's what this life really is... a series of problems and struggles and let's face it, storms!  Why are we so shocked! Why do we think just because we are followers of Jesus that we won't face storms?  Some pastors may tell you that... they may twist Scripture to say that you'll have your best life here and now. Let me tell you something, if that's the case, if this is my best life and heaven is no better than this, I'm in real trouble.

Let us cross over to the other side,  Jesus says with a smile as He extends His hand.

And when the storm rose, He was fast asleep in the boat. It even mentions that he had a pillow!  That always makes me laugh. I have such a hard time sleeping in my own bed... and here Jesus was so calm and at peace, He could sleep on a ship in a storm!  But there's much to be learned from that.


The truth is neither should we be concerned one bit about the story. Why? Because Jesus said

Let us cross to the other side.

That means that you WILL cross to the other side. He never lies. He never exaggerates. His Words never return to Him void.

And they awoke Him and said to Him, “Teacher, do You not care that we are perishing?” (Don't you care about my problems? Don't you hear my prayers?)  Then He arose and rebuked the wind, and said to the sea, “Peace,be still!” And the wind ceased and there was a great calm. But He said to them, “Why are you so fearful? How is it that you have no faith?”

What about us? Do we believe Jesus that we will make it to heaven, that He's with us every step of the way. That if He desires, He can calm the storm?

Equally important and the lesson I believe the Lord was teaching me. Why are you even looking at the storm? Why you concentrating on the problem? Look ahead at the shore on the other side. That's your destiny. That's where you're going. These storms? They are nothing in comparison to where you're going. They can't hurt you if I'm with you. They can't stop you from your eternal destiny as long as you stay in the boat and with me. In other words, rise above the storm, walk on the water with me, and together, hand in hand, we will reach those glorious shores together!