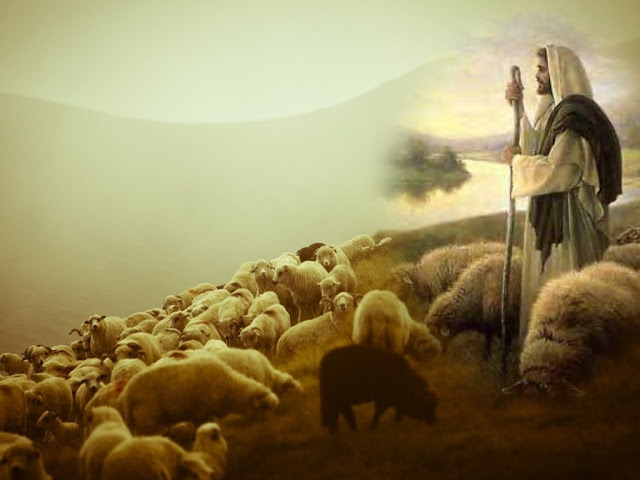 Once upon a time there was a handsome prince who had a glorious Kingdom, a beautiful palace, all the wealth one could ever need, and millions of acres of rich, fertile land. He lacked only one thing. A beautiful bride to share it with. But He couldn't just have any bride. He wanted a bride who would love Him for who He was, not one who only wanted what He could give her. So, He paid an enormous bride-price and put out the Word that all who wanted to become His bride would only have to receive His offer, commit their lives to Him, and follow Him. Many many prospective brides came and accepted Him, each vying for His hand.

But there was a catch. The prince went away for a long, long time, and communication between Him and His bride became difficult. No longer could they see Him, touch Him, hear His voice. He left them only with an instruction book on how to prepare themselves to be His bride, but He didn't tell them when He would return. Yet, He didn't leave them alone. He gave them an invisible servant who would always be with them and who would help them become a spotless bride. This servant would also teach them how to hear the voice of their prince, but only for those who desired to hear it above all else.

The years passed and many of those who'd first been excited to marry the prince grew weary. They stopped reading the instruction book, they stopped listening to the servant or even believing He was there. They grew complacent and no longer prepared themselves for their upcoming wedding. Some of them started telling the other brides that the prince would never return. It was all just a fantasy. Most of the brides abandoned the prince and went out after other lovers.

However, there were a few who never gave up. They believed their prince would return one day. They read the instruction book daily. They learned to be sensitive to the servant and allow Him to lead them, to instruct them, to convict them. And more importantly, they pressed in, longing to hear from their Prince. They knew from reading the instruction book that it was possible to  hear His voice, so they never gave up. They were so desperately in love with Him, so desperate to hear from Him, to feel His presence, that they gave up everything to do so--their time, pleasures, even food.  And they heard from Him! Oh, what joy! The more they pressed in, the more they learned how to hear His voice above all others!  Each day they grew more in love with Him and each day, with His and His servant's help, they prepared their wedding gowns for that great day when they would see the Prince face to face!

MaryLu Here
Do you hear from the Lord?  This has become a passion for me recently. So many believers settle for a sermon on Sunday, an occasional devotional, a laundry-list of prayer requests, and then we go on our way, leaving the Son of God sitting there, longing to speak to us. But we are already about our daily business, rarely even thinking of Him. This is not the bride He is returning to marry. He has impressed this on me very strongly lately.

I'm not talking about works here, nor am I talking about being saved or not saved. I'm talking about being a part of the Bride. This is important now more than ever because Jesus is coming back soon for His Bride. Are you a part of it? There are prerequisites. You can find them throughout Scripture. The one I'm focusing on today is hearing His voice.  I'm talking about really hearing His voice. In order to do that, you have to want it more than anything, and you have to be willing to give up things. For me, it's been time and food! Two of my favorite things!  I'm not very good at sitting still and just listening. I'm also not very good at fasting. But I've found that those two things, at least for me, must occur if I truly want to hear from the Lord. I'm not talking about prayer time. There's a time to pray and ask God for things and then there's a time to be quiet and listen.

You CAN hear from God. Not an audible voice, though that's possible. But a direct impression, perception, leading within your spirit... a guidance to a particular verse, a thought that leads you in the right direction. But you have to want it. You have to listen and cultivate a listening ear for the things of the Spirit. It takes time. It takes practice. But from my limited experience, there's nothing better than being in the presence of God and hearing from Him!!  Plus, it changes you. It deepens your faith, your desire to serve Him. It presses out the wrinkles in your wedding gown and bleaches out the spots.


He did this to present her to himself as a glorious church without a spot or wrinkle or any other blemish. Instead, she will be holy and without fault. Ephesians 5:27

“And I assure you that the time is coming, indeed it’s here now, when the dead will hear my voice—the voice of the Son of God. And those who listen will live. John 5:25

Everyone who is of the truth hears My voice. John 18:37

Hearing God's voice is essential to walking with Him and following Him. If you don't hear Him, how do you know where He wants you to go.. .what He wants you to do. And especially, how will you hear your Prince when He comes to get you for the wedding?

Jesus rebukes the last days' church in Revelation 3 for being Lukewarm. His response is to vomit them out of His mouth. Then He pleads with them to do what? To hear His voice!

“Look! I stand at the door and knock. If you hear my voice and open the door, I will come in, and we will share a meal together as friends. Those who are victorious will sit with me on my throne, just as I was victorious and sat with my Father on his throne." Rev 3:20-21

This isn't a salvation verse like so many pastors will tell you! Look at the context. This is addressed to believers... the lukewarm church!  Jesus is appealing to us to Hear His Voice. To get alone with Him and listen!

Today, may we learn to hear His glorious voice!