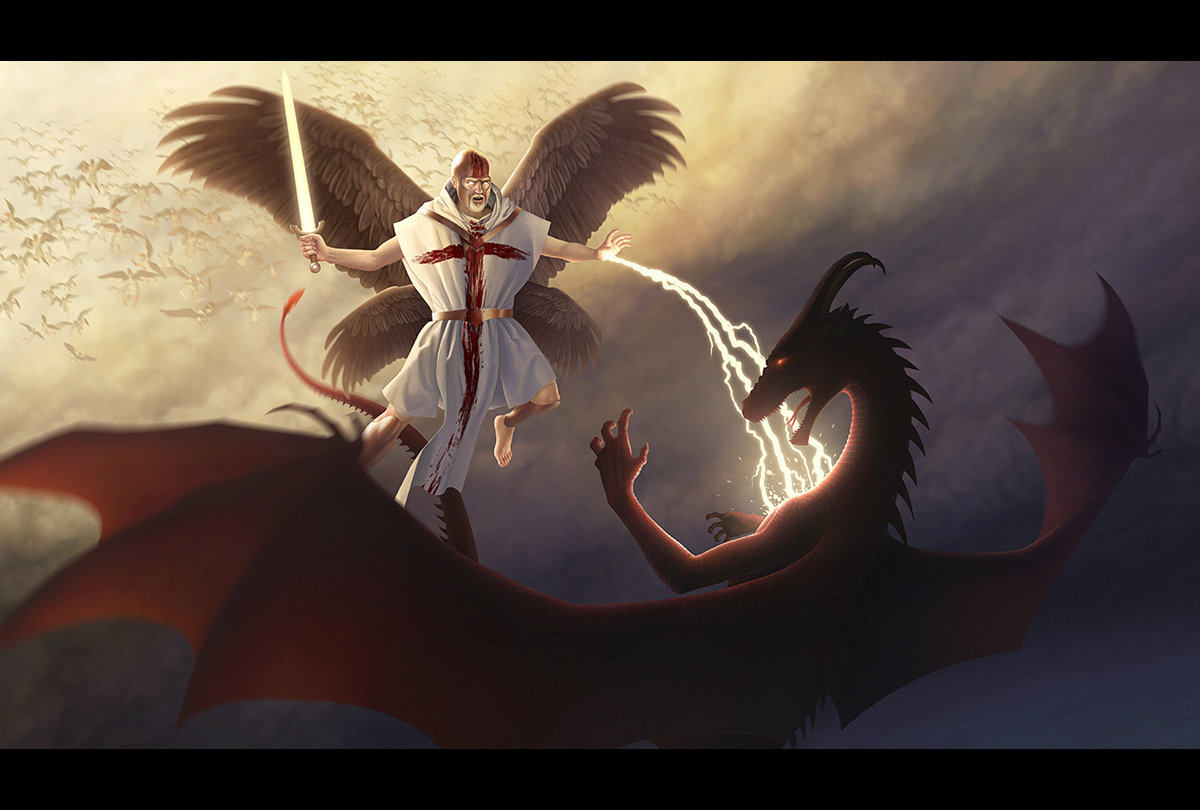 And I wanted to create a One World Government with me as the ultimate ruler, and while I'm doing that, take as many human souls to hell as I can.... I would

Hate that Christianity was taking off like wildfire in the first century, and that people were being saved by the thousands! Grrr. Hence my first order of business would be to put a stop to that immediately and .....

1. Make Christianity legal
Move believers out of homes and into formal churches
Incorporate rituals not specified in the Bible
Centralize power of the church in a small group of people at the top
Make Bible unavailable to the common man
Instill as many false doctrines as possible
Make the church about power and money, not about Jesus
Incorporate Pagan rituals in place of God's Holy feast days

And hence we entered the Dark Ages.
But God had a plan. It was called the Reformation. Yet, Satan did not give up on his ultimate plan!

2. Create Satanic Secret Societies and fill them with powerful and rich people that would do his bidding.

Some of these societies have been around since the Middle ages. They have been running things since then....Managing the world's money, starting wars, developing nations and destroying others. Don't believe me? Do you homework!  Many members of  these societies don't realize how evil they are. Only those at the top of the pyramid in these groups know who they are working for and who they are worshiping. Satan. He promises power and wealth. The same thing he offered Jesus during His temptation. Satan has no new tricks.

Their goal? A one world order with them in charge.  Sound familiar? This is what Satan wants too.
Next step?  To

3. Create a new religion that worships Satan.  But keep that fact hidden in layers of history and myth.
This religion will be one of extreme violence and terror and intolerant of all other religions (especially Christianity and Judaism) to the point of killing as many of them as they can find. After all, those religions worship God, the Creator, and He is Satan's only enemy.

4. Start an age of Enlightenment in which Science takes precedence over Faith. Make Scientists and their work more important and credible to believe than anything about God, and label anyone who doesn't agree with Science an idiot.

5. Start the false theory of Evolution which explains how people weren't created but evolved from amoebas in mud who turned into fish, who crawled on land, turned into birds, and eventually apes and man. This theory has actually been refuted today, but most scientists won't admit it because they might have to admit there was a Creator.

Yet, much to Satan's frustration,  the church grew. Especially in America where many came to escape religious persecution.
So, now, if I were Satan, what would I do?

6.  If I couldn't stop the church from growing, I'd take away its power.

I'd make pastors believe that all the Holy Spirit gifts of power in the Bible were only for the time of the Apostles, and I'd give them a verse to prove it. I'd make sure they didn't believe in tongues, healings, demons and demon deliverance, prophecy, and miracles.  I'd make Christians focus more on the natural and not the spiritual, on this world and not the next.

7. Put people from my Secret Societies in high positions of Government so they will enact laws that I want.  20 out of our 45 US Presidents have belonged to one of these Secret Societies... that we know of.  I would have my millionaires fund groups that promote a "New World Order", Socialism, Open Borders, etc, and I'd promote violent protest mobs against anything conservative and Biblically traditional.
Place people in high places who will promote my agenda of same-sex marriage and abortion.

8. Start a "Free Love" movement where it's acceptable to have sex with anyone you want at any time. This has a two-fold purpose. One to keep people sinning and hence away from God, and two, destroy the God-ordained family unit in which Godly children can be raised. Toss off all religious restraints and restrictions, and don't worry about all those unwanted pregnancies, broken hears, sexual diseases, and the break up of the traditional family.
Create dysfunctional families without fathers so kids grow up without authority in the home
Make divorce easy and acceptable
Make marriage about selfishness instead of commitment and service to each other.

8. Pervert the Education System in order to create an ignorant and deceived population

9. Hide the fact that there are still Nephilim on earth by either hiding them in Antarctica or diluting their genes with human reproduction to produce beings which look completely human.  The Bible tells us that Nephilim remained after the flood. It also tells us that at the end of time, these fallen angel descendants would be in great abundance. "As in the days of Noah" .

10. Advance ideas of socialism and communism as "Cool" and "humane" and a kind system for social justice, when in fact these systems strip people of their rights and subjugate them.

And still the church grew, despite it's lack of power, despite it's secular attitudes.... What should Satan do? If he can't stop these annoying Christians, well, the next best thing is to deceive them by....

11. Infiltrating the church with false doctrines that will send many so-called believers to hell.

12. Since Evolution "theory" is waning, order Nephilim to appear in the sky and kidnap people occasionally to introduce the idea that there are beings from other planets visiting ours. Then when aliens do come (but they are really Nephilim or demons), and tell people that they are our creators and have come back to help us, everyone will believe them!  I've met people who actually already believe this!

13. Legalize marijuana and keep the drugs coming!
The more comatose we keep people, the less they will realize what's going on

14. Strip people of their rights, but do it slowly, and in the name of equality and social justice!
Create Social media platforms that ban opinions that oppose those of the people who run them. Silence alternate opinions by labeling them racists, haters, homophobes, and zenaphobes.

15, Make homosexuality and transgender acceptable and normal and even "cool"!

16. Create technology that will keep everyone entertained and create a society of people who have the attention span of a gnat.

17 Take over the Media and Entertainment Industries

18. Create Civil unrest and Violence.
Pay people to go out and violently protest any opinion that goes against Satan's agenda. Use the media, entertainment and politicians to deceive people and stir them up toward violence and harassment. (Satan loves hate and he smiles when humans hate each other and are violent toward each other) This also paves the way for more Governmental control

19. Give the people the moral high road so that anything goes.
Tell people who follow my philosophies that they are in the right. That what they believe is good and moral and that those who don't believe as they do are evil. Hence, the means justifies the end. It's okay to attack verbally and physically anyone who opposes your viewpoint. In the words of Hillary Clinton, it's okay to not be civil with people who oppose everything you believe in.

Despite Satan's efforts, the church still existed... though he'd managed to convince many who attend that they are saved, when in reality they will go to hell. Still there were pockets of revival and growth, so...

20. Continue to make the church impotent


21. Dissolve national borders in the guise of kindness and generosity and call anyone opposed a racist and bigot.

22. Urge Governments and other ideological mobs to persecute, imprison, and kill any and all true Christians they can find
The World watches while Christians are butchered
Christians the most persecuted group in the world

23. Make witchcraft and satanism cool and interesting and acceptable by glorifying it through stories such as Harry Potter, movies, TV shows, and America's favorite holiday, Halloween. Make it seem "harmless".
Satanism on the rise in America

That's what I would do if I were Satan.....  and I would increase these things when I realized my time was growing short. But those pesky believers in Jesus keep thwarting my plans! I'll be glad when they are taken away and I can finally set up my world empire and rule as I was intended to do! Then I can torture and kill as many of these humans as possible! I HATE them because they are made in the image of God. I will implant the "seed" of my fallen angels in these humans and make them forever unredeemable.   Then I will make them worship me!!  I will be worshiped!

“How you are fallen from heaven,
O Lucifer, son of the morning!
How you are cut down to the ground,
You who weakened the nations!

For you have said in your heart:
‘I will ascend into heaven,
I will exalt my throne above the stars of God;
I will also sit on the mount of the congregation
On the farthest sides of the north;

I will ascend above the heights of the clouds,
I will be like the Most High.’

Yet you shall be brought down to Sheol,
To the lowest depths of the Pit.

“Those who see you will gaze at you,
And consider you, saying:
‘Is this the man who made the earth tremble,
Who shook kingdoms,

Who made the world as a wilderness
And destroyed its cities,
Who did not open the house of his prisoners?’

“All the kings of the nations,
All of them, sleep in glory,
Everyone in his own house;

But you are cast out of your grave
Like an abominable branch,
Like the garment of those who are slain,
Thrust through with a sword,
Who go down to the stones of the pit,
Like a corpse trodden underfoot.
Isaiah 14

And they overcame him by the blood of the Lamb and by the word of their testimony, and they did not love their lives to the death.