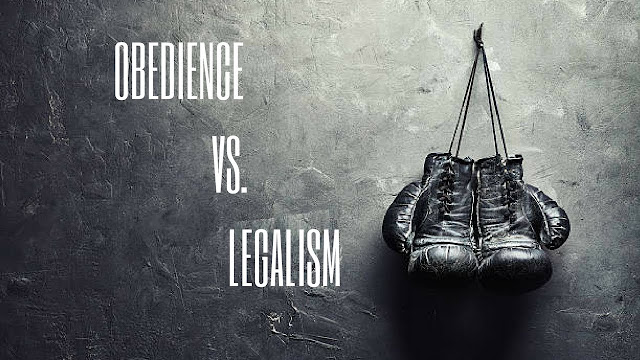 I believe the true tragedy of the modern affluent church is that we have misinterpreted Obedience and called it Legalism. It is one of the greatest deceptions Satan has perpetrated on Christians.

Obedience - the act of obeying. Dutiful or submissive compliance
Legalism - the doctrine of salvation through good works. Strict adherence to laws, but to the letter of the law and not the spirit.

As you can see, obedience is more than just following rules, it is a condition of one's heart. It's not connected with any specific rule, but rather a submission to a higher authority.

Legalism is merely following a set of rules, hence it is more action-oriented. One can follow a set of rules without being obedient. Let that sink in. For example, one of the chores you've assigned your teenage son is to take out the garbage, but he continually forgets and often the garbage piles up and you have to remind him and nag him, and finally with a groan, he picks up the trash can and takes it outside.  He's doing what you asked, but with the wrong motive. His heart is not submissive to your authority or he would have done what you asked on time. Make sense?

Whenever I bring up the fact that true believers cannot live in purposeful sin or compromise with the world, or they risk their salvation (if they ever were saved)  I make people very angry. I've lost friends, readers, blog and facebook followers. They call me a legalist and tell me I'm a false prophet who is just trying to scare people.  They quote Scriptures like

For it is by grace you have been saved, through faith—and this is not from yourselves, it is the gift of God— not by works, so that no one can boast. Ephesians 2:9

Yet unlike what many churches and pastors will tell you, that is not the end of your obedience. It is only the beginning. When you get saved, you enter into covenant with Jesus. It's actually a marriage covenant. You submit yourself completely to Him as your Lord and King. That means you obey Him. It has nothing to do with works.

There are countless Scriptures, too many to name here, where Jesus said that you must continually abide in Him, take up your cross and follow Him, deny yourself, obey his commands, etc..etc.. Otherwise, you are plucked off the vine and tossed in the fire.  I don't think He was kidding.  Even that famous verse in Romans 8:1 so many people like to quote that says

There is therefore now no condemnation to those who are in Christ Jesus,

Think of it this way, your spouse comes home one night and says, "Honey, I brought you some flowers, I washed your car, I picked up the groceries on your list and made reservations to take you to dinner tomorrow night."

You'd say, "Wow, that's so wonderful. Thank you so much. You're the best husband in the world!"

The first list of things he did were works. The second thing he did was obedience to the covenant of marriage. The works are extra things that are appreciated but not necessary to keep the covenant together. The second thing is both necessary and expected. If this husband wasn't obedient in those things, the wife would have Biblical reason to divorce him. And if we aren't obedient to Jesus, He has Biblical ground to divorce us as well.

Of course we all mess up, right!  So I'm not talking about living a sinless life. I'm talking about an attitude of the heart .... a complete submission to Jesus, which displays itself in obedience to His Word.

So, if someone is a habitual (purposeful and repeated)
Liar, Gossiper, thief, adulterer, fornicator, homosexual and they never improve, they will not make it to heaven. The Bible is clear.

Remember the Apostle Paul wrote that verse under the age of GRACE.

If you've made it this far, here is something very interesting.  In Matthew 24:41

Two women shall be grinding at the mill; the one shall be taken, and the other left.

Here the Greek word, paralambanō "shall be taken"  means "To take to oneself, to join to oneself as a companion"
And the Greek word aphiēmi  For "left"  means  "to send away, as a husband divorcing his wife."

So, these two people are believers. You can't divorce someone unless you are married to them.

I hope this reaches someone who believes they are safe because they accepted Jesus and are now living under Grace, someone who is living life for themselves and purposely disobeying God. Wake up! Time is short.