One will be in the field, one taken, one left... why pretrib? 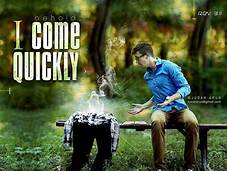 In my last 3 posts, we've been discussing the Days of Noah and Lot and comparing them to our present time. Today I want to briefly talk about another reason I truly believe in the Pre-tribulation rapture. I have many Scriptures to back up my beliefs, but if you're interested, here's a post I wrote a while back on it.

Let's say for a moment that the rapture doesn't occur before the tribulation but afterward and right before the 2nd coming of Jesus, as many who adhere to the Post-tribulation theory believe. This is what the world will look like by then.

Revelation 8
1/3 of all green grass and trees burned
A giant asteroid strikes the sea and 1/3 of the sea turns to blood and 1/3 of ships destroyed
Another asteroid turns 1/3 of fresh water to bitter and poison
1/3 of Sun, Moon and stars lose their light.

Revelation 9
All non-believers tortured by demon locusts for 5 months, begging for death
1/3 of all humans killed by giant army marching from the east

So basically by the end of the Tribulation,  nearly three-quarters of the population will be dead, there won't be any fresh water and no viable sea water, hence no fish to eat. 1/3 of all vegetation will be gone and probably most of the rest when the asteroids hit and then again when sun goes dark for so long and all the fresh water is gone. The remaining people will be in agonizing pain due to plagues, starvation, earthquakes, meteors and war. Oh and a massive earthquake will crumble every city and level every mountain and sink every island. Did I mention the 75 pound hailstones?  And don't forget that the Antichrist will be in charge, the most vicious dictator who ever lived.

So, do you honestly expect me to believe that two men will be out in the field farming when there's no water or sun? Or even sleeping in bed comfortably. Will two women will be going about their day grinding flour? or just going to work? Huh?  There won't be any fields or flour or even comfy beds at the end of the tribulation, or in the middle for that matter.

My point? The rapture, as described by Jesus Himself, can't possibly be at the end of the tribulation. The description Jesus gives is one of Life as Normal.  Now if He had said.

Two men will be hiding in a cave, starving and weeping over the loss of their homes and families and
Two women will be crawling through sewage-laden ruins, looking for a scrap of food to eat..

Then yes, I will believe the rapture occurs at the end of the tribulation, but it doesn't say that, does it? This just gives me more proof that the rapture is pre-tribulation!