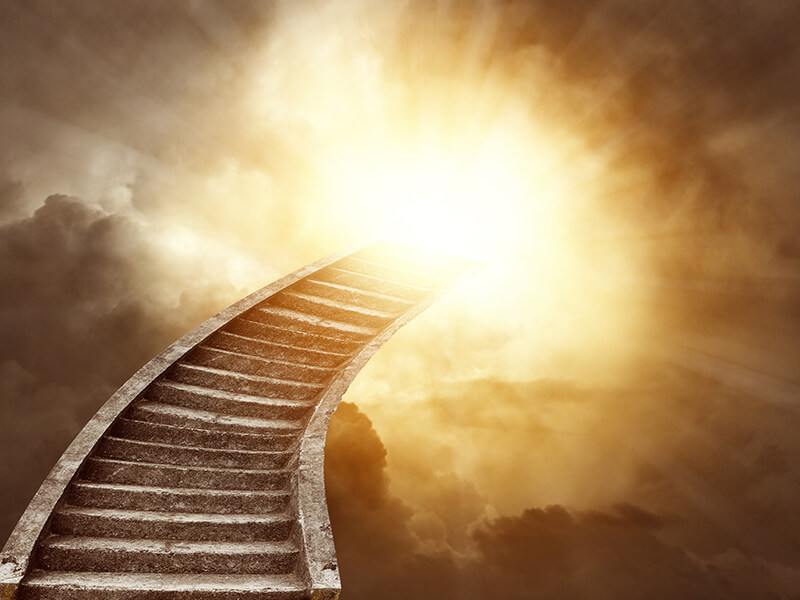 This past week my family suffered the loss of a loved one. To honor his privacy and the privacy of my family, I won't disclose who it was, but suffice it to say it was someone in the immediate family.  Death, even if expected, is such a shock to our spirits, isn't it? Some of you who have experienced the death of someone close know just what I mean. Shock, denial, grief, anger, are the initial emotions that swarm over us. But why? If we are merely biological beings who crawled out of a swamp and we all know we will die someday, why does it affect us so?  Of course we all expect to be sad that we won't see this person again, but why the shock the denial, the anger?

I believe it's because our spirits KNOW we are eternal beings.  Death is such an insult to that knowledge, such a crime even. Death is pure evil and comes from our enemy. Which is why we deny, we get angry and depressed when someone is taken from us. We shout. "This is not right! This is wrong! I don't believe it!"  because we know deep down that death is indeed wrong and an affront to who God created us to be.

God hates death. I'm reminded of the story of Jesus as he approached the grave of his good friend, Lazarus and witnessed the people grieving and crying and mourning the loss... and how this is the only time in the Bible that it records that Jesus cried. (Even when he knew he would rise Lazarus from the dead!)  God promises us that death and the grave will be abolished in the end.

For He must reign until He has put all His enemies under His feet. The last enemy that will be abolished is death  1 Corinthians 15:25

This particular person in our family was not a believer most of his life. In fact, when he went into the hospital, he was still spouting his atheism. But, you see, he was part of a family of believers, parents, siblings, X-wives, and children, all who believed and who were on their knees in prayer this past week. One of those precious warriors of God kept vigil by this person's bed, praying and confessing all this person's sins... essentially standing in the gap as intercessors are supposed to do. This warrior remained for 3 days and then the family member passed. I am reminded that THREE is a very prophetic number in the Bible.

I believe in prayer. I believe prayer is powerful. I also believe that God saves households as the Bible indicates. God created the family and He knows the love we have for each other. He promises to save households. And NOTHING is impossible with God. Do you think God can't appear to this person in their unconscious state and speak to them? Of course He can. I've read testimonies of people leaving their bodies and being dragged to hell. In that moment they thought it was too late, but then they returned to their bodies and immediately received Jesus's outstretched hand.


For with God nothing will be impossible  Luke 1:37
Believe in the Lord Jesus, and you will be saved, you and your household  Acts 16:31
Surely the arm of the Lord is not too short to save, nor his ear too dull to hear. Isaiah 59:1
The prayer of a righteous person is powerful and effective.  James 5:16

There was no visible indication that this person turned to Jesus in the end. But I believe he did. Why? Because I believe God and His Word, and I have an unusual peace about this. So do other family members. Some have had dreams of him in heaven, visions of him when he was young. God is so good to grant us these peeks into eternity to bring us comfort!  What a gracious and loving God we serve!


So, don't give up on your lost family member. Pray always, claim them for the Kingdom of God in Jesus's name. Pray and fast to break strongholds in their mind. Proclaim Scripture over them. Love them. And believe. Take God as His Word!

On a happier note, I've never felt closer to heaven than I have in the past few months. It's the strangest feeling. I keep seeing in my mind pictures of it.... imagining being there. This has never happened to me before. Is it because I'm growing closer to the Lord? Or perhaps we really are that close to being taken home! I'd be thrilled with both of those reasons!  I make no predictions, but I sense an excitement in my spirit. I hope you do too!

We serve a wonderful, magnificent God!  And He loves you like a father loves an only child... a precious child. Never forget that!