How I would characterize 2018 in one Word 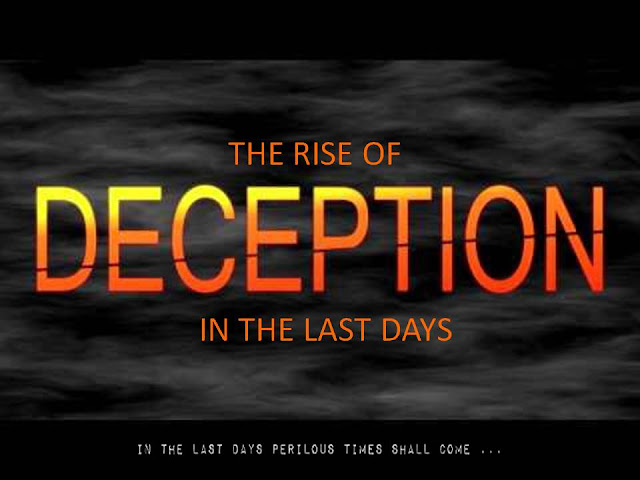 It would be Deception.


Happy New Year everyone!  Or almost New Year. 2019. Wow. Sounds almost Sci-Fi to someone like me who grew up in the 60's.  Yes, I'm that old!  Anyway, as I was thinking about what to post about today, the word Deception kept popping into my mind.

So many things happened Prophetically in 2018. It was truly an amazing year to prove how true the Bible is. I plan on posting next Monday a general recap of 2018 as it pertains to the End Times prophecies of the Bible.  But on this New Years Eve, I'm issuing a warning for the New Year.

The Media
The Government
The Church

I grew up in an era where we had three main news stations: NBC, CBS, and ABC, and we knew and trusted the men and women who gave us the news. Now, we have huge news opinion networks such as FOX, MSNBC, and CNN. Naturally, I simply trusted what most of these "newscasters" were telling me. I had no reason not to. But over the past few years and more recently last year, I began to see that something was terribly wrong.  I would switch between FOX and CNN and they would be reporting on the same story, but they would be citing vastly different "facts".   Somebody was lying.  So, I sought out independent news online to get the real information about about local and world events.

Now I realize that much of our media is in bed with a particular political party and beliefs.  They have an agenda and hence, they will report things through that agenda. They have no qualms about lying as long as it produces what they consider to be the right course for our country.  And this isn't just a USA problem. This is all over the world.

The problem lies in that many people still trust the media to give them the truth. This is the first step toward a dictatorship and the exact method Hitler used to gain power. If you can convince the population of certain "facts" and ideas, then you can sway the vote in your direction and gain power.

When we completely lose the Media in this country, our republic is gone. The trouble is we are halfway there now. Why? Because they are trying to shut down independent media and independent thought. Facebook, You tube, Twitter and other social media (Where many Americans get some of their news) have banned people, shut down pages and channels, and squelched any opinions the CEOs of these companies don't agree with.

Please, don't believe the media in this country anymore. Take what they say with a grain of salt, ask God for discernment, and seek out the truth online while you still can.  I never thought I'd see this in my country, but Jesus told us there would be great deception in the last days.

Anyone who is aware of what is happening in Washington D.C. these days knows that many members of Congress, some members of our current administration, and high-ranking officials in our Government, CIA, FBI, etc. are lying to us. How do I know this? Because they come on TV and say something which I later find out through trustworthy news sites is a lie.  It's truly a shame that we can no longer trust our government, but most of them lie to get into office, and then do anything to keep their power once there. It's a power and money game and has nothing to do with what's in the best interest of the people of America.

Did you know that George Washington didn't want any member of Congress to get paid a salary? That's why they were called public servants.  They went back to their businesses and farms when there wasn't anything to vote on. Washington declared that if they ever received a salary, our government would fail because it would all be about money and they'd keep voting raises for themselves.

I've spoken on this before, so I won't elaborate here, but I see so many Christians who have been raised in church, trust everything their pastor says, and believe so many false doctrines, that it's outright scary. Very few believers actually read the Bible for themselves. They go to church or a Bible study and soak in whatever the teacher says. We, like sheep, are being led to the slaughter!  If I were Satan and I wanted to ensure most people followed me to hell, I'd infiltrate the church with as many false doctrines as I could, and I'd be really sneaky about it.  Your pastor may not even be aware that he's teaching something wrong. He probably learned it in seminary (which one of the Bible teachers I follow called Cemetery) .


Here's a few False Doctrines to be aware of.
I am not saying your church or your pastor is preaching anything wrong. (Please don't email me nasty emails!)  I'm simply saying that MANY churches out there do.

What is the best way to keep from being deceived?  It's a method that most Christians won't do because it takes time and effort:

Read your Bible! That's how I began to question what I was hearing in church. Don't just read it, study it. There are a ton of great tools online. Bible Gateway, Blue letter Bible, where you can look up the words in the original language!  So cool!  And while you're reading, ask the Holy Spirit to interpret for you. He's the one who wrote it, so He's the one who best knows what it means.  Do this everyday. Read the Bible through in a year. And spend time with Jesus.  He is the truth. And if you seek Him with all your heart, He promises, you will find Him!