Recent attacks on my family: Beware, the enemy is on the prowl! 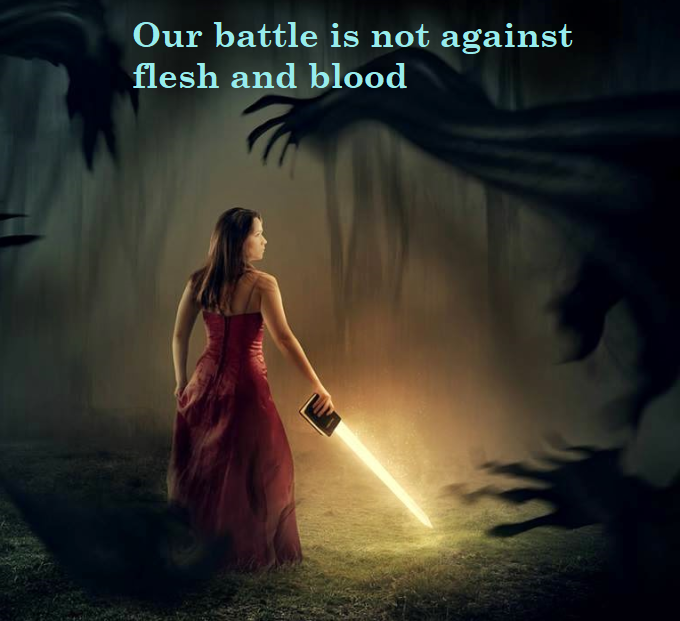 This may not be a very cheerful holiday message, but I felt led to tell a few stories of things that have happened to me, my family, and friends recently.  (I promise to post something Christmassy next week!)   First of all, I know many who read this come from traditional churches that rarely preach on spiritual warfare, demons, and Satan.  So, there may be some eye-rolling going on, or even some click aways. That's fine. Though I encourage you to stay. Everything I'm about to tell you is Biblical, and if your pastor doesn't ever preach on these topics, then he's not doing his job to equip the saints for battle.

Yes, as long as we are on this earth and we belong to Jesus, we are in a battle. And that battle is intensifying. You see, Satan is the ruler of this world. He has been since Adam and Eve sinned in the Garden of Eden and handed over the title deed. God gave them the deed to the earth, but they were forced to hand it over to God's enemy.  One of Satan's temptations to Jesus was that he would give Jesus all the kingdoms of the world if Jesus would bow down and worship him. (Matt 4:9) He couldn't offer that if he didn't own them all.

Truth is, Satan is in charge of this world, and he's been working behind the scenes for thousands of years to prepare his kingdom to emerge on the scene. His ultimate goal is to rule and reign out of Jerusalem where he will declare himself to be god. He will do this through the beast system, the antichrist empire that will soon be here. I could go on about that, but I'll leave it there for another time.

In the meantime, Satan has an army, and it is well organized. He has the angels who followed him in the great rebellion in heaven organized in various degrees of authority, and he has a host of demons, who are the disembodied spirits of dead Nephilim. Their job is 5 fold.


Notice that demons and fallen angels only attack Christians who are on the front lines. If you're a lukewarm believer who really isn't doing much for the Lord and are more concerned with this world than the next, don't worry, Satan will leave you alone.  He's quite happy with your condition because he knows Jesus will vomit you out of His mouth.  (Revelation 3:16)

Back to my stories.  I believe Satan is becoming more and more bold in these last days. He's salivating for his chance to rule from Jerusalem, but he's also furious at those of us he can't push way from God. So furious and filled with hate for us that he is exposing himself in ways he never would before.

Those of you who follow my blog remember the trouble my brother came into recently. Due to political correctness and a ton of attacks from the left, he lost his position on SWAT, which devastated him.  He's a solid believer, so he'll be fine, but the other night, Satan showed his hand and revealed just where this attack came from...a spiritual attack.  My brother went to bed and was lying there trying to fall asleep and this hand rose up from under the sheet toward him.  The fingers became snakes and started choking him. He couldn't breathe and tried to pry them off of him. Finally he prayed and the entity left. Believe me, this sort of thing has never happened to my brother.

A couple nights later, in the middle of the night, I was awoken by my bed shaking. At first I thought I was dreaming but when I came fully awake, the bed was still shaking and the sound I heard was like a dog scratching fleas from his body. We don't have a dog. Instantly, I whispered (Because my husband was asleep) "Get out in the name of Jesus!"  And the shaking stopped.

Recently, a friend of the family was also in her bed early one morning. Her husband had left to go to the airport. He is not a believer and often gives her trouble about it. She heard footsteps coming back down the hall and someone slipped in bed with her. She assumed his flight was cancelled so she drifted back to sleep. But this entity starting pushing her, shoving her, and she opened her eyes to see her husband's face with no hair, fangs, and ugly teeth. He kept pushing her and pushing her and she finally commanded it to leave in Jesus's name and boom, it was gone.

These are just 3 incidents that have happened in the last couple of weeks.  Many of you may remember my post long ago of how my husband and I were attacked in Jamaica when we went there for our anniversary. Lights were flashing on and off in our room and my husband was having a dream he was pinned to the wall and couldn't move and ravens were pecking at his eyes.  Once I realized what was going on, I commanded them to leave in Jesus's name and boom, everything stopped. I'll never forget that as long as I live.

The POWER in that name!!  If you get anything out of this post, remember the power in the name of Jesus. Demons do actually flee when a true believer utters that name. I've seen it first hand. Which means Jesus is the Son of God. He did die for our sins and rose again. And He does sit at the right hand of the Father in heaven. There is a heaven and hell and we are in a battle for the souls of men.

Yet, His Spirit lives within us. Which means we can do anything that He did while here on earth. And even greater things.

I assure you and most solemnly say to you, anyone who believes in Me as Savior will also do the things that I do; and he will do even greater things than these, because I am going to the Father. And I will do whatever you ask in My name as My representative, this I will do, so that the Father may be glorified and celebrated in the Son. John 14:12-13

For this purpose the Son of God was manifested, that he might destroy the works of the devil. 1 John 3:8

If Jesus came to do that and we are His representatives, then we are to also battle the enemy. Why am I telling you this? Because most Christians rarely think about our enemy. They don't realize they are soldiers in a war, and they have no idea how to do battle. When the enemy comes after them, they don't even realize it's the enemy!  They think it's just bad luck, life in a fallen world, or unfortunate circumstances. They accept the job loss, the prodigal child, the divorce, the critical medical diagnosis, the lack of necessities as normal struggles.  Yes, not everything is an attack of the enemy, but I'm here to tell you that Most bad things are.  God said we would have trouble in this world and that trials would make us strong, but he also said He had overcome the world, that He'd be with us through the struggles, and that we would come out victorious if we trusted in Him

He also said
For if by the one man’s offense death reigned through the one, much more those who receive abundance of grace and of the gift of righteousness will reign in life through the One, Jesus Christ. Romans 5:17

Don't cower from the enemy. Don't settle for barely getting by in life. Learn how to fight, pick up your sword (The Word of God--read it, memorize it, speak it out loud. Ask God to increase your faith!), and be the warrior God called you to be. Time is short and there are souls to be won!

Listen carefully: I have given you authority that you now possess to tread on serpents and scorpions, and the ability to exercise authority over all the power of the enemy (Satan); and nothing will in any way harm you. Luke 10:19 Amplified

When are God's people going to finally take Him at his Word?