Do you have anyone else here on earth? Take them and get out! 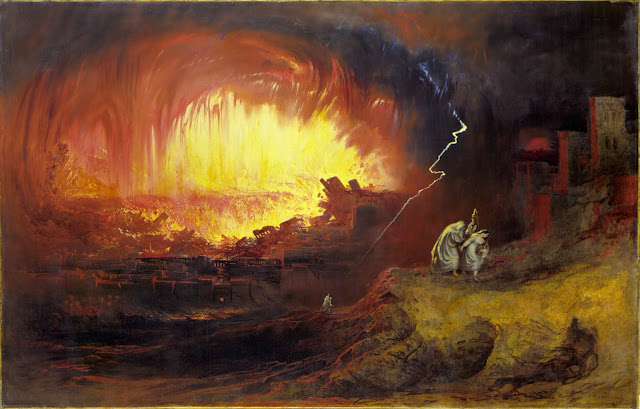 As we approach the close of the age, I run across many people who are very concerned about their lost loved ones. Will they be taken in the Rapture? What if they get left behind? How will they endure? Worse, what if they die in their sins? As a mother of a prodigal, I agree that it's absolutely terrifying!

Yet God does not give us a Spirit of Fear, right? (2 Tim 1:7) In fact, a quick search of the Bible reveals 170 "Fear nots" and 80 "be not afraids" Fear is the opposite of faith and anything not done in Faith is sin to God. (Hebrews 11:6)  Yikes!  But how can we not fear for our loved ones going to hell? The very thought of it makes me sick to my stomach.

One of my favorite stories in the Old Testament is the story of Lot and Sodom and Gomorrah. There are so many facets to this story that amaze me such as ...

1. That Abraham was allowed to bargain with God to save Sodom if there were a certain number of righteous people in it!  The Lord knew all along exactly how many righteous there were in the city, yet He allowed Abraham to ramble on. (Gives me hope in my prayer life!) They finally settled on 10. Just 10 righteous!

2. Lot was not particularly a Godly man. If you read the stories involving him, he seemed rather selfish, self-centered, and obviously not a good father. What was Lot's saving grace?  He was Abraham's nephew and Abraham loved him. Do you love a family member who isn't displaying Godly character?

You know the story. The Lord sent angels to get Lot and his family out before He rained down sulfur and destroyed the city. A homosexual mob tried to assault the angels. Lot tried to protect them, even offering his daughters to them, but the angels had the final word.  Recently I was reading this story and these words of the angels leapt out at me.  I don't honestly remember seeing them before.

“Have you anyone else here? Son-in-law, your sons, your daughters, and whomever you have in the city—take them out of this place! For we will destroy this place..."  Genesis 19:12-13

Lot then went in search of his son-in-laws. Now, these 2 young men were NOT married to Lot's daughters yet. We know that because the Scripture says Lot's daughters were virgins. They were no doubt engaged to Lot's daughters. Lot found them, but they didn't believe him and didn't want to leave. In fact, Scripture says they thought he was joking.  However, it's obvious from Scripture that if the men had wanted to leave, they could have. This astounds me!  Why? Because these men were obviously not righteous, but if they had agreed to be saved, they would have been. Indeed, they were only asked because of their relation to Lot!

This gives me great hope for my lost loved ones!  God saves families! God created families! God is the Father of a Family of believers, a bride for His Son!  He understands the bond and love between family members.

And HE is asking you now, “Have you anyone else here? Son-in-law, your sons, your daughters, and whomever you have in the city—take them out of this place!"

How do you do that? By prayer, intense, fervent prayer and fasting. Time is short. Get on your knees everyday and pray for your lost loved ones!  Quote the above Scripture to the Lord and say "Yes, I have others here!" Then name them. Ask for God to open their hearts to Him, to open their eyes. Ask Him to send a Godly believer across their path to witness to them. Ask and never stop asking! God answers prayers, especially prayers of his true children!

I'm also reminded of the stories of Rahab and Noah. Rahab was a prostitute who helped two spies from Israel escape Jericho.  She was a believer in the God of Israel and asked for mercy from the spies when the Israelites attached Jericho. They gave her instructions to gather ALL her family "bring your father, your mother, your brothers, and all your father’s household to your own home" and put a scarlet cord out her window. Hence, ALL of Rahab's family was saved.

Noah. The Bible records that ONLY Noah was found righteous. It makes no mention that his wife, sons, and daughters-in-law were righteous. Yet, they all were permitted on the Ark to be saved.

In Acts 16, Peter told the jailer how to be saved.
“Believe on the Lord Jesus Christ, and you will be saved, you and your household.”
Why did he say household? How would Peter know whether the man's household would also believe?

There are a ton of other Scriptures about families. I encourage you to seek them out. Don't give up! The Lord hears. The Lord loves it when we use His Word in our requests to Him. He cannot help but answer and give us our requests!!! Be encouraged and get to work. Time is short!