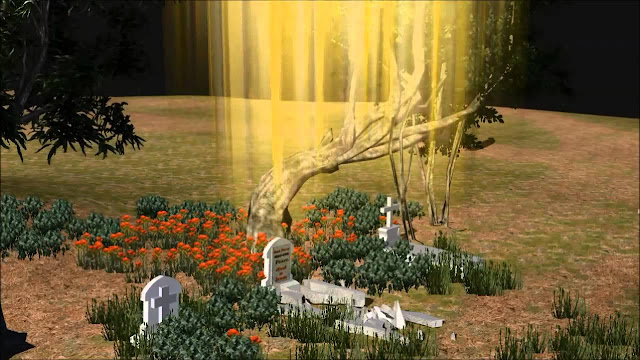 I pray all of you had a wonderful day yesterday, celebrating our Lord's Resurrection!  Without the Resurrection, we would all still be lost in our sins. If you want to know some of the most compelling evidence that Jesus rose from the dead, check out my article HERE.

Did you know that a Rapture of Saints already occurred thousands of years ago?  Check out this verse which occurs right after Jesus died on the cross.

Then, behold, the veil of the temple was torn in two from top to bottom; and the earth quaked, and the rocks were split, and the graves were opened; and many bodies of the saints who had fallen asleep were raised; and coming out of the graves after His resurrection, they went into the holy city and appeared to many.  Matthew 37:51-52

This Scripture has always fascinated me.  It says MANY bodies of the saints who had fallen asleep, right? So, what about Abraham, Moses, Isaac, David, Elisha... etc?  Can you imagine if you lived there at that time and you saw a bunch of dead saints walking around?   Yet, the more I study this Scripture, the more I've come to believe that is not what happened.

Yes, I believe many saints were raised from the dead, came out of their graves, and went into the holy city, appearing to many.  That is CLEAR from the Scripture. But a closer look at "the holy city" in the Greek gives us some clues as to where they appeared.

If you put those together, it can't possibly mean the earthly Jerusalem. Jerusalem at that time was anything but pure, sacred, or morally blameless. And since city can mean the Heavenly Jerusalem, we can assume that the risen saints went up to heaven and were seen walking about the heavenly Jerusalem!

So, they were raptured, right? Paul tells us that in the rapture to come the dead will rise first from their graves and only then will those of us still alive be taken up. (1 Thess 4:16)

So, why did this happen? I venture to guess that it had something to do with what Jesus did in Hades before He rose again. Remember, he was in his tomb for 3 days. We are told that He preached the Gospel and then led many captives up on high.


This is why it says: “When he ascended on high, he took many captives and gave gifts to his people.” What does “he ascended” mean except that he also descended to the lower, earthly regions?  Ephesians 4:8-9

He was put to death in the body but made alive in the Spirit. After being made alive, he went and made proclamation to the imprisoned spirits— to those who were disobedient long ago when God waited patiently in the days of Noah while the ark was being built. 1 Peter 3:18-20

Remember that before Jesus's atonement for sin, everyone who died when to a place called Hades or Sheol. This is sort of a waiting area that is described in Jesus's parable in Luke 16.   The Righteous are kept in comfort on one side, while the wicked are kept in discomfort on the other. After Jesus paid the price for sin, He visited this place, told them what He had done, and took all the righteous with Him to Heaven. I believe that it was at that point that the bodies of those righteous saints were raised from the dead and reconnected with their spirits when they arrived in Heaven. It would make sense, right?

Either way, we know that Saints rose from the dead around the time that Jesus did. Many of them! Hence, this was the first mass Rapture!  I sure hope the next mass Rapture happens soon!