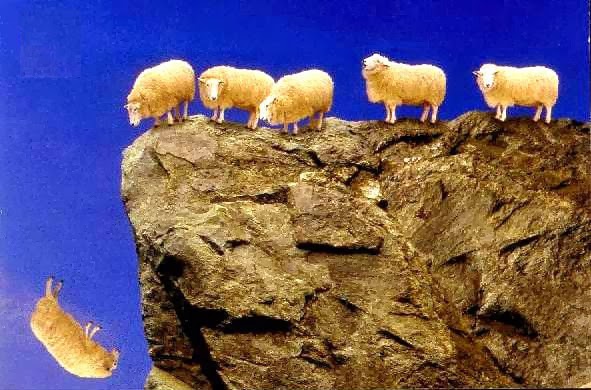 I must admit to being a bit naive in my youth. I grew up in a time (50s -60s) where it seemed most people were decent.  I believed that my teachers, pastors, and even government officials were, for the most part, good and working for my benefit.  I trusted what my teacher or pastor told me. I figured they were the experts on certain subjects so why shouldn't I believe them? Why would they purposely deceive me? I guess I always try to see the good in people and trust them first unless they prove otherwise.

That is not the case anymore. Many of you know I spend a great deal of time researching world events as they relate to Biblical prophecy, and in those investigations I have discovered that nothing in this world is as it seems. If I told you all the things I have learned and now believe to be true, you'd label me a conspiracy theorist and write me off. It would also shock you to your core and cause unnecessary fear in some of you, which I don't wish to do.

So why even bother to mention it? Because I feel the Lord wants me to put out a warning to you all, a very urgent warning. You see, many many people will be deceived in these last days, both before and after the rapture. Many Christians will be deceived. A quick read through the New Testament reveals warning after warning against deception and False prophets. Yet most Christians I know think of false prophets as someone obvious like Jim Jones or David Koresh, or perhaps the Mormons or Jehovah's Witnesses.

Let me ask you a question. Do you think Satan is stupid? Do you think he would be so obvious?  Think about that for a minute. Our enemy is brilliant and he's had years to perfect his craft. His short term goal has always been to keep people from being truly saved. His long term goal is to bring about his kingdom on earth and rule and reign here. He's already got the atheists going to hell, so he's not going to bother with them. And let's face it, he's probably not going to be very successful in turning a believer into a non-believer. His next best bet is to infiltrate the church and put his own people in the seminaries and pulpits where they can introduce false doctrine.

I'm not talking about the obvious false doctrines like the current one that says homosexuality is not a sin. Most of us know better. I'm talking about doctrines that keep you happy and content in your Christianity but that will lead you straight to hell. Yes, a person can be a church-goer and even 'believe" in Jesus and still end up in hell. NO WAY! you say. That's heresy!   But it's in the Bible. After I got saved, unlike many Christians, I actually read my Bible cover to cover, year after year.. and I started to notice discrepancies between what I was hearing in church and what the Bible actually said. At first I thought it must be me misinterpreting it, but after years went by and as I grew in my faith, the Holy Spirit told me otherwise.

Let's talk about government. I always believed in my country, that America was a Christian nation and inherently good. (I still believe many Americans are that way)  But I have learned that our government has rarely if ever been good. Many of our presidents have been Freemasons, Washington D.C. itself was set up in the shape of a pentagram, there are statues of gods and goddesses everywhere, including the Statue of Liberty.  Luciferians, Masons, and Globalists have been running our country for years right under our noses. Their goal? To infiltrate churches, schools, media, and entertainment and brainwash the masses into believing there is no God and that a Global Socialist world government is the answer to all of man's woes. Then they create chaos within the country by division and riots and they weaken our military, economy, and borders so we will be overrun. They slowly strip away our rights in the name of safety and we sit and allow it.  What you watch on mainstream media every night in D.C. is just a play act, a circus of performers intent on destroying this once great nation.  They don't care about you, the poor, immigrants, the sick, or anyone in this country. They care about power and money.

Yet the church is asleep. People are asleep. They think life will go on just like it always has. I'm here to tell you that these luciferian globalists have been at this for thousands of years and they aren't giving up. The Bible is clear. There will be a final World Empire, the empire of the AntiChrist, who will rule with an iron fist and kill everyone who will not bend their knee to him. And it's coming sooner than you think.

There is only one truth you can count on in this world and it is the Bible, God's Holy Word, and its author, the Holy Spirit!  And even that, they have tried to corrupt. It's important to take any translation you have and look up the words in the original Greek and Hebrew to get their real meaning.

So, I'm here with an urgent warning from the Lord. Do not be deceived. Test everything your pastor says to you, don't believe the media, question every fact your professor cites, double check even what your friends (and me) tell you! Do your own research. And ask the Holy Spirit to give you discernment.

There is an even greater deception coming soon that will be so overwhelming, so incredible that many many will fall for it. Those who know God intimately and their Bible thoroughly will be the only ones who will understand what is happening.

The Good news is, God wins in the end! And someday Jesus will return and wipe out all the evil in this place with one breath, and then He will rule and reign here on earth in righteousness!  I can't wait!