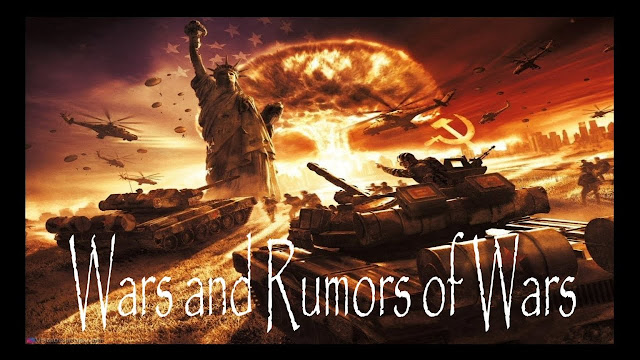 Since I no longer have time to do the full Mad Friday post, I thought I'd take a single topic, perhaps an  End-Times topic or something that struck me during the week and post my thoughts and some related links as time permits. Not every week, but as often as I can. Today, it's Wars and Rumors of Wars.

And ye shall hear of wars and rumours of wars: see that ye be not troubled: for all these things must come to pass, but the end is not yet. Matthew 24:6

Jesus warned us that not only wars would increase but rumors of wars. I find the rumor part interesting because basically that's what we are hearing today. The 20th century saw two huge World Wars and tons of smaller wars across the globe. I found this website that lists the wars of the 20th-21st centuries and how many died.  Amazing!

Honestly today our world is a power keg, just waiting for someone to light a match. The Ezekiel 38 nations are surrounding Israel, and Russia, Iran, and China are threatening the US and others. The nutjob in North Korea can't help but fire missiles everywhere and the India/Pakistan border is a hot zone of hostility.

What causes war? The right question might be WHO benefits?  Now this is purely speculation on my part, but it is based on several articles I have read from reputable sources. I believe that most of our recent wars have been caused by a group of Global Elites and Bankers. They have the money and wherewithal to cause false flag events and stir up the people into a frenzy of hatred toward each other. Why would they do this? For two reasons. The main one is, they make a ton of money off of war. And the second, they often use war to distract the population from what they are really doing, which is gaining power and stealing your rights.

Am I trying to cause fear? NO. Quite the opposite. Yes more wars are coming. In fact, I believe we are on the cusp of World War 3.  Yet, we who believe in Jesus and follow Him need not fear at all. For one thing, before it gets really bad, our Prince is coming to rescue us. Secondly, even if we die, all we do is step out of this old suit of clothing and enter Heaven. It's a win-win situation!

My intention is only to show you how close we are. I want to get your hopes up, keep you looking up, keep you in prayer and in the Bible. Because prophecy is coming true before our eyes!

Russia warns that the UK is a nuclear target they can hit within minutes
Iran unveils 3 new special missiles and warns the US of the "mother of all wars" if US attacks
Americans are ignoring the global war on the horizon
China vows a response if US deploys missiles in the region.
Israeli tanks can be operated by AI
Three major events happening right now that could lead to global war
North Korea launches more missiles
US officials rush to stop Turkish invasion of northern Syria
Chinese economic retaliation is an 11 on a scale of 1-10 says Wall Street
China is extremely angry and they consider the US to be enemy number 1
Iran seizes tanker carrying smuggled fuel in Gulf
China warns retaliation after Trump's latest tariffs