Free on Kindle The Reckoning!

To celebrate the approach of my next release in March, I'm giving away one of my books on kindle every 2 weeks!  This is a great time for you to pick up any of my books you don't have or haven't read. Also, you can "gift" this to a friend from Amazon!  Spread the word to your reader friends too!

The Reckoning is absolutely FREE on Amazon from today, November 29th - Sunday, December 1st. This book is the fifth in my best-selling and award-winning Legacy of the King's Pirates series, but can be read as a standalone too. It is my only time-travel story, full of twists and turns, and guaranteed to entertain! 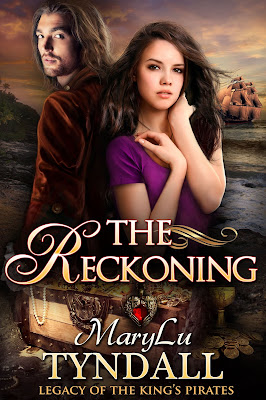 What an amazing, unpredictable read with more twists and turns than a treasure map! Initially I was not sure about the time travel aspect of the story, but MaryLu Tyndall wrote it so realistically that I stayed glued to the pages with emotions as tossed as a ship upon the waves. Diana Flowers, Book Reviews

Time travel and the pirate age, MaryLu Tyndall makes it a rip-roaring, swashbuckling winner of it! Don't miss The Reckoning, mateys, or risk walking the plank! Tell Tale Book Reviews by Jasmine

Have a GREAT Weekend!