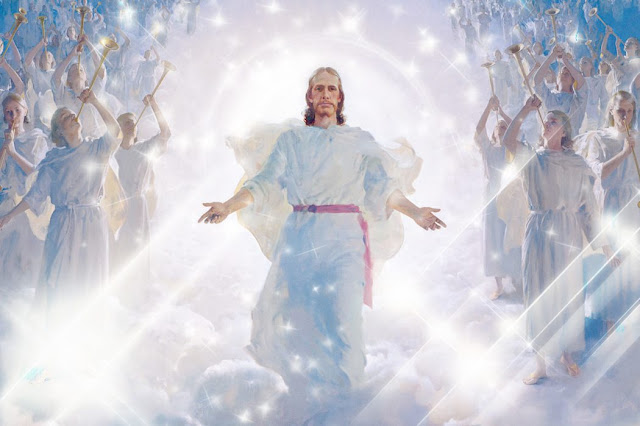 Yesterday I sent out a newsletter containing a story I wrote a few years ago describing the scene in heaven just before Jesus leaves to come down to earth and be born as a human.  If you don't get my newsletter, you missed out!  Anyway, one of my readers contacted me with this poem she wrote, describing much the same thing. It is so beautiful I wanted to share it with on on this Christmas Day!

A Christmas Dialogue by Judi Elliott


"It's time," said the Father.
"It's time," said the Son.
Time for Redemption had finally come.
"I wish there were another way."
"I, too, My Son, rue this day
When I must send You forth from Heaven's glory
To bring fulfillment to the human story.
They had such promise, so innocent and pure,
Outside observers most certainly were sure
That the man's and woman's perfect state
Would fare them well ‘gainst the Serpent's bait.
Remember how We watched from above,
Hearts riven with consummate love,
Aching for them, and the pain they would bear,
They and all others, for the hubris there?
But You, My Son, have in Your power
To rescue them and topple the tower
Of sin and pain and degradation
As in Jericho's generation,
Reversing the Serpent's victory
Redeeming human history.
I, too, wish there were another way,
That You wouldn't have to go today.
But I know Your heart, Your unfailing love
That willingly goes to pay the price
For the only perfect sacrifice
That can satisfy most holy justice,
Even though the cost is to Us.
Once again My heart is breaking,
Raging' gainst this outrageous taking
Of Your Royal Mantle from You!
Ah—but in going You make all things new,
And so, most precious Son of Mine,
It's up to You to step into time,
And laying aside Your claim to the sublime
Appear in the most unexpected of ways
For one also known as the Ancient of Days
Arriving surreptitiously undercover
With naught but angels to joyfully hover
Over some unsuspecting shepherds,
Singing, "Hallelujah! Have you heard?"
Go quickly, My Son, My very Life,
Go quickly, before My internal strife
Keeps You here—spared from pain and degradation,
Insults, blasphemies, humiliation."
“It’s time,” said the Father.
“It’s time,” said the Son.
Looking over His shoulder, the Son waved good-bye
Catching the tears in His Father's eyes,
As He stepped into history—into suffering and loss—
Through the manger and onto the cross.


Have a very Merry Christmas!