WOW, Update. So it seems ALL the links in my post below are not working, which is very weird since I wrote this and tested this yesterday and I know how to put in links that work. Been doing it for years. I can only assume I've been sabotaged somehow. I don't have time to redo this today.. but just read the Titles and you'll get the drift of what is going on. If there's a particular link you really would like, let me know and I'll try and find it. Sorry about that! 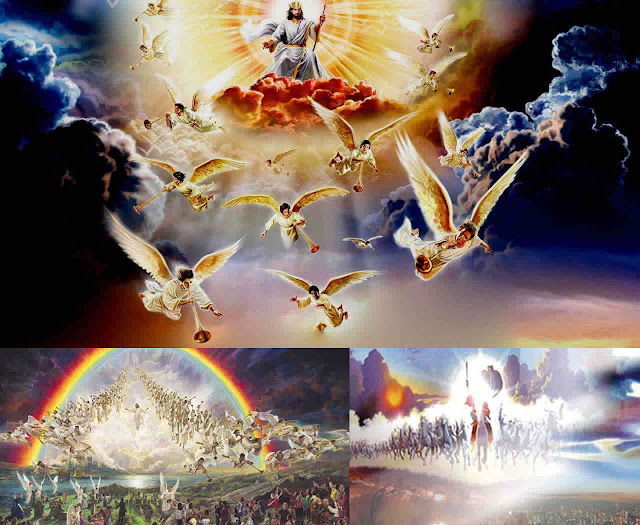 Hello Fellow watchers. Things are happening so fast, I can hardly keep up. Mind you, I have a full time writing career, a house to run, and we watch our grandkids two full days a week, so I really can't follow all the breaking news. However, so much happened the past week or so, I wanted to at least highlight the things that raised my brows.

Again, this is not meant to cause fear, but rather to alert you to the times in which we live and the soon and imminent return of Jesus to snatch His bride out of this place before things get too bad.

I will comment on some of these items below.

Any peace plan with Israel will get my attention, so this is huge! Remember, according to Daniel, the Antichrist will "confirm or strengthen" an existing Peace treaty
Trump brokers a peace deal between Israel and the United Arab Emirates

We will see more and more UFO sightings, etc, as time goes on. I believe that an alien arrival will be part of the end times deception to prove there is no God. They will arrive and announce they are the saviors of mankind, but they are demons and Nephilim.

Can you believe we are living in an age where cities are considering getting rid of police protection? Since that makes no logical sense at all and MOST citizens are not for that.. what is their purpose? To cause chaos and violence, reduce the population, and usher in a socialist regime.

The biggest jaw dropper for me in this section was that some lawyers and politicians are saying that if you refuse the vaccine you could be jailed. There's also a great video I list below that explains the coming Great Rest and the New World Economic Forum. This is all part of the rising Global government.

Big Tech protecting Pedophiles, Bans hashtag #savethechldren
Chicago using social media to track people breaking quarantine
Google's new tattoo turn skin into a touch pad
States have the right to fine or jail people who refuse the vaccine
Global elites discuss The Davos Plan or the Great Reset to capitalize on Covid and roll out the NWO
Fox Doctor Mark Siegel wants kids who aren't vaccinated to wear yellow badges just like the Jews in Germany
Amazon removes pro-life video despite it's many 5 star reviews
Great video explaining in detail what The Great Reset and how Trump must be removed so they can carry on with their plans

The Covid hoax to destroy America

It is still this author's belief after much study that yes, there is a virus, but it is no more deadly than the flu or the recent swine flue. I firmly believe there is enough evidence to support the accusation that they are fudging the numbers of both infected and deaths and making it look far worse than it is. Why?  (See above section of NWO)  Also they want us afraid enough to accept their deadly vaccine, which I have spoken of in detail before.

Stanford study: True death rate of Covid - 19 is no more than seasonal flu
Lockdowns set to plunge 100million into extreme poverty
Prominent doctor warns about Covid Vaccines and the outrageous immunity give to vaccine makers
Trump supports Bill and Melinda Gate's Vaccine Alliance, Gavi
America does not understand the true goals of the lockdown

Indonesian volcano erupts, spewing ash 3 miles into the sky
Why have so many earthquakes hit the US in recent months?
3 Volcano-tectonic quakes rock Mt. Pinatubo in the Philippines in 24 hours
Earthquake swarm under the Salton sea near the San Andreas

I've also spoken about this in recent posts. Throughout the ages, Satan has always demanded child sacrifice. He also loves to molest and harm little children. Think Baal and Moleck from ancient times. Currently we are only beginning to see how rampant pedophilia is in our world, particularly among the elite, the famous, and rich. Sexual molestation is only a part of it. These evil people also sacrifice children. Look up Adrenochrome if you have the stomach for it. This is just another sign of the times Jesus warned us about.

I have read both of a secret Chinese presence here in the US, along with a very suspect love of all things China by our social media giants and politicians. That, coupled with recent dreams of foreign troops on our soil makes me think that China may very well attack us. Not meant to scare... just be aware.
China increases military drills as tensions rise with US

Again, don't be alarmed!  What can you do about all this? Nothing but pray and seek God's face like you never have before. Warn your neighbors and friends. Show them how prophecy in the Bible is coming true before their eyes. Time is running short and we all need to be on our faces before God, repent, fast and pray, read the Word. Don't just read a quick devotion or a few verses. Really read the Bible and ask God to reveal things to you. Get to know Him, commit your heart and life to Him. Pray for your loved ones.

God promises to snatch His children out of harm's way!! It's all throughout the Scripture. So, be at peace. Put your faith and trust in the Only One who is trustworthy.

Do not fear, little flock, for it is your Father’s good pleasure to give you the kingdom. Luke 12:32