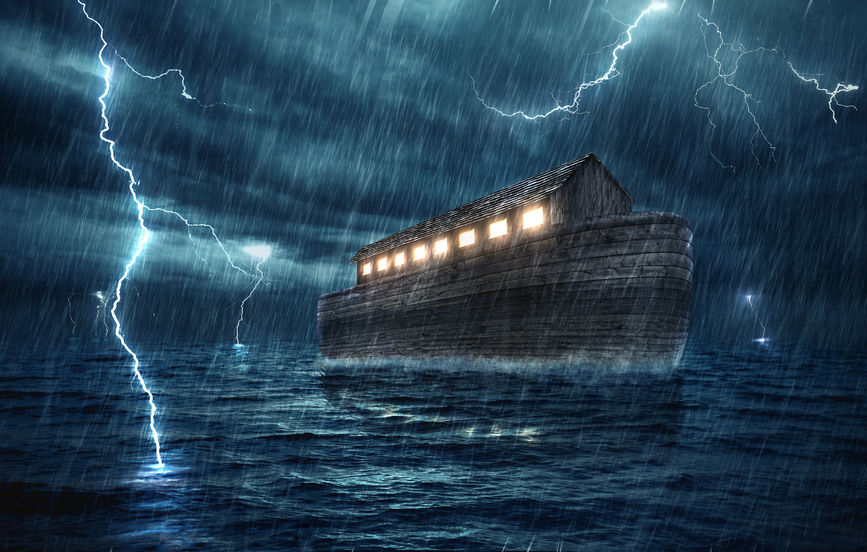 And the Lord said unto Noah, Come thou and all thy house into the ark; for thee have I seen righteous before me in this generation....For yet seven days, and I will cause it to rain upon the earth forty days and forty nights; and every living substance that I have made will I destroy from off the face of the earth... And Noah did according unto all that the Lord commanded him. And Noah was six hundred years old when the flood of waters was upon the earth. And Noah went in, and his sons, and his wife, and his sons' wives with him, into the ark, because of the waters of the flood. And it came to pass after seven days, that the waters of the flood were upon the earth. In the six hundredth year of Noah's life, in the second month, the seventeenth day of the month, the same day were all the fountains of the great deep broken up, and the windows of heaven were opened.  Genesis 7:1-11
Bear with me here. You're going to love this! We see from above that Noah entered the Ark 7 days before God brought the flood. The Bible tells us the exact day the flood began, In the 2nd Month on the 17th day of the month.  Have you ever wondered why God gave us such specific details about the month and day?
The Jewish people had an ancient calendar (Before the Exodus from Egypt) which had their months in a different order than they do today. Originally, as you can see in the chart below, they used what is now called the "Civil Year" months. These would have been the months used in Noah's day. 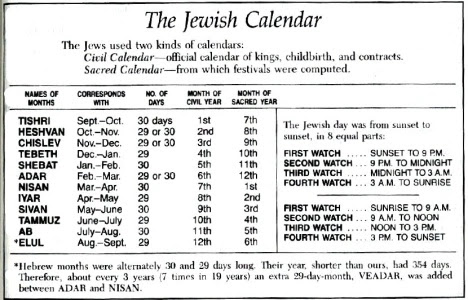 In Exodus 12, God first institutes Passover. He tells Moses the Children of Israel are to take a lamb without spot or blemish into their homes on the 10th day of the First Month, and then Kill it on the 14th day. At the beginning of the chapter, God tells Moses that this particular month (which used to be the 7th month of the year) will now be the first month of the year.
Now the Lord spoke to Moses and Aaron in the land of Egypt, saying, “This month shall be your beginning of months; it shall be the first month of the year to you. Exodus 12:1-2
So we find out here that Nisan used to be the 7th month, but God switched it to first month when the Children of Israel were being rescued from Egypt. What is important about Nisan? If you're a believer than you know that the Passover supper is a type and shadow of the sacrifice of Jesus, the lamb of God. Jesus entered Jerusalem on Nisan 10 just as the priests were bringing the lamb into the temple and inspecting it for 4 days. Jesus was crucified on Nisan 14th, at the exact same time the priests were sacrificing the lamb on the altar!
Back to Noah. So, when we read that the flood waters began on Month 2, day 17, we need to go to the ancient calendar since the flood happened long before Exodus. The 2nd month is Heshvan which corresponds to our October-November Timeframe. in fact if you look up the 17th day of Heshvan it falls on November 3rd-4th this year. Why 2 days? Because the Jews start their new day at sunset, not at dawn.
So you probably see where I'm going with this. Maybe the Tribulation will begin on the same day the flood began, and hence our rescue like Noah's will happen on that same day.  You might think that making this connection is a bit of a stretch. And you may be right, but remember what Jesus said about this time?
But as the days of Noah were, so also will the coming of the Son of Man be. For as in the days before the flood, they were eating and drinking, marrying and giving in marriage, until the day that Noah entered the ark, and did not know until the flood came and took them all away, so also will the coming of the Son of Man be Matthew 24:37-39
Jesus references the Days of Noah right before He starts describing the rapture. For years I thought He was just referring to people living normal lives, eating, drinking, etc, completely unaware of the imminent danger, but since then I've dug deeper into Jesus's meaning. Maybe he wanted us to look at ALL the facts surrounding Noah's day, of which there are several... the timing with the 120 year warning, the Nephilim that were present, the evil.. and now, the date! Nothing in in the Bible without a reason.
So when did Noah's Ark finally land on the earth again?
Then the ark rested in the seventh month, the seventeenth day of the month, on the mountains of Ararat. Genesis 8:4
The 7th month from the ancient calendar is Nisan. What's so important about Nisan 17? Anyone?  If Jesus was crucified on the 14th and buried, didn't He rise again on Nisan 17?  Nisan 17 is the Resurrection!! And is so happens to be the very day Noah's Ark came to rest on Mount Ararat. Did you know what Ararat means?
Ararat = "the curse reversed: precipitation of curse"
Jesus reversed the curse of sin when He resurrected from the grave! And Noah's landing on Mt. Ararat reversed the curse put on mankind by God in the flood. In fact, God promised never to destroy the earth with a flood again.
Do you think this is just a coincidence? No way. Isn't it clear that God is orchestrating events and pinpointing them on exact days throughout history? God is in control, and He has a plan. Don't you think that He has already determined the start date of the Tribulation AND our subsequent Rapture? Or does He just pick a random day?
We are in the 120th year of warning from the Lord that started in 1900. We are just a week away from the exact date Noah entered the Ark and God judged the world with a flood. Noah and 7 others were saved in the Ark. You could look at this as Jesus and the 7 churches we see in Revelation.
One more thing. Heshvan or Cheshvan is the 8th month of the year for the Jews. The numerical value of Jesus in Greek is 888. Also the number 8 has Biblical significance and means New Beginnings.
Am I saying the rapture will be next week? NO. I'm just pointing out these great Biblical truths and trying to connect the dots. Mainly I want people to wake up and see the times in which we live, get right with God, and keep looking up for our Prince to come!
I want to share this short dream with you. I trust this lady. I've been following her for years. She's an awesome Holy-Spirit filled woman of God. Check out this dream!
By the way, I can't take credit for much of this study. I leaned it from Pastor Sandy Armstrong from Soldiers for Christ Church
Come, Lord Jesus, Come!
Posted by MaryLu Tyndall at 12:30 AM